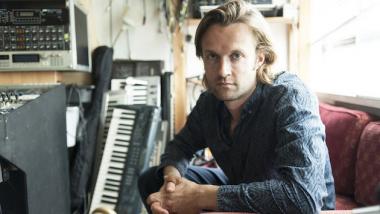 Gabriel Prokofiev, 45, is a London-born-raised-and-based composer and DJ — and yes, he’s related to you-know-who. While straddling the classical and electronica camps, he has turned out eight ballets, seven concertos, three string quartets and other chamber works, an opera (Elizabetta), a gleeful “symphonic remix” (Beethoven9), and several electronic pieces — a catalog becoming nearly as varied and sometimes as provocative in its own way as that of his famous grandfather. 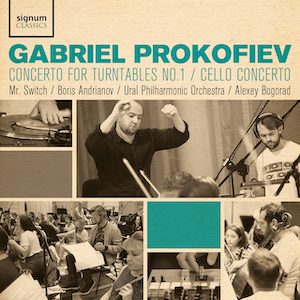 Prokofiev says that he wants to bring classical music “out of its 20th-century bubble into the culturally open and diverse world that we now live in.” Undoubtedly, that’s what his five-movement Concerto for Turntables No. 1 tries to do, putting the virtuoso London DJ Mr. Switch at the center of a riotous work that in this expanded orchestra version reportedly took the BBC Proms by storm in 2011 (Signum Classics).

Mr. Switch manipulates his turntables to make backwards, groaning, hissing, wiping, whipping, scratching sounds, much of which were improvised (what notations there are in the printed score occasionally match what I hear). He uses the pitch slider on his turntables to alter the speed of the revolving records, most dramatically just before the end of the second movement and to close the third movement where it sounds like a record grinding to a halt with the needle still in the groove. The finale incorporates hip-hop and jazz as the percussion cooks like a rhythm section, with a humorous cadenza for the turntables. There is more oddball humor at the start of the third movement where the musicians chatter and yawn, one opens a can of soda, and the conductor clears his throat — all as instructed by the score.

The orchestra (Russia’s Ural Philharmonic under the direction of Alexei Bogorad) is perhaps unsurprisingly well-integrated into the DJ jungle, since the ensemble itself has been sampled for use by the DJ; sometimes the electronic facsimile of the orchestra emerges imperceptibly from the real thing. It’s really a fun, interesting fusion along parallel lines of what Mason Bates has been doing (Prokofiev has since written a second Turntable Concerto) — and it would probably go over well with progressive California orchestras if we ever get back on track post-virus.

Also on the disc is Prokofiev’s relatively conservative Cello Concerto, which only uses acoustic instruments. While the opening movement is a lighthearted thing that proceeds in mordant lurches, the second movement is slower, reflective and pessimistic, and only in the third movement do mechanical-sounding electronica influences — if not the actual sounds — surface, with hints of sarcasm and a false ending or two. Boris Andrianov is the soloist.

Try as he might have at one time to escape the intimidating shadow of his grandfather, Gabriel Prokofiev now seems comfortable embracing his heritage, for I sense the steady staccato tread of unmistakable Sergei Prokofiev rhythm in the slow fourth movement of the Turntable Concerto, which is then warped by the spinning platters. That rhythmic tread runs even more noticeably through most of the slow second movement of the Cello Concerto, heavier and way more foreboding than before. The family business may have skipped a generation — Gabriel’s father Oleg was an abstract painter — but it is definitely back in gear in the 21st century.

Seong-Jin Cho Simulates a Concert Recital in the Studio

A decade’s worth of the Canadian composer’s challenging new music takes time to absorb.