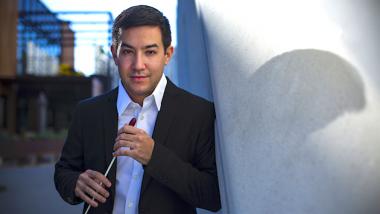 The Santa Rosa Symphony is calling 2017–18 “a choice season” because the next few months offer the audience and the symphony’s board of directors a chance to choose a new conductor from a pool of five candidates. Each candidate will lead a three-concert weekend set this fall and winter, with a final decision expected next March.

The conductor for the opening set was Francesco Lecce-Chong, a 30-year-old Colorado native who began his career as a pianist. Currently music director of the Eugene Symphony and associate conductor of the Pittsburgh Symphony, he appears poised for lift-off into the classical-music firmament.

Lecce-Chong strode onto the stage for the Sunday performance clad entirely in black, topped by jet-black hair without a hint of gray. He immediately brought his youthful enthusiasm to bear on the opening number, Mason Bates’s Garages of the Valley, an homage to the low-tech spaces in Silicon Valley where the digital age began.

Garages, filled as it is with the insistent rhythms of number-crunching machines, was a perfect vehicle for Lecce-Chong to display his commitment to new music and his exuberant yet compact style. He stood with feet firmly planted shoulder-length apart and conducted almost entirely with his upper body, moving the baton and his right hand forcefully, with equally emphatic use of his head and left hand.

Lecce-Chong never strayed far from his initial pose, choosing to focus the orchestra on his steady beat and precise cues. The result was an exacting performance of a challenging score that thrives on intricacy and accuracy. There was a lot of col legno from the strings and rapid passagework from the winds. The dynamic range, however, was quite limited, and the piece never achieved much forward motion. One kept waiting for a theme to arise out of the brilliantly orchestrated background. Perhaps the best verdict on Garages came from a patron behind me, who opined to her companion, “It had a lot of nice color.”

Forward motion and thematic development arrived in the next piece, Beethoven’s Third Piano Concerto, brilliantly played by Joyce Yang. She brings a graceful fluidity to every aspect of her playing, and her entry after the long orchestral introduction was electrifying. Every note was crystal clear, with remarkable command of dynamics.

Lecce-Chong ably assisted Yang from the podium, keeping the orchestral volume way down to let her lines emerge in the near-perfect acoustics of Weill Hall. At times, she seemed more like a singer, turning each phrase into a vocal expression of innermost feelings. Her cadenza in the first movement was a showcase of brilliant runs, perfectly sustained trills, and bewitching turns of phrase.

The Largo second movement was truly largo, with vast distances between the beats. Sustaining momentum at that speed is quite difficult, but Yang did so with serenity, swaying slowly back, and forth as if in a trance. Near the end, she leaned way into the keyboard to play a pianissimo phrase, holding the pose for a long moment before the orchestra moved on.

The last movement was a romp dominated by Yang and Lecce-Chong’s superb control of dynamics. The softest passages were often the most energetic, and the loud ones never got out of hand. At the end, I had the impression of hearing this much-played concerto for the first time.

Lecce-Chong fared admirably in the Bates and the Beethoven, but the real test came in the second half with Tchaikovsky’s Fourth Symphony. The conductor resumed his basic stance — feet planted firmly apart, arms close to the vest — and summoned a powerful volley from the brass to open the symphony. That was glorious, but the subsequent response from the rest of the orchestra began to drag and lacked the requisite epic sweep.

As the movement unfolded, Lecce-Chong’s shortcomings became apparent. His range of motion is limited, and his left-hand movements often replicate those of his right hand, placing more emphasis on the beat than on expression. Instead of using his left hand to control the volume, he used his upper body, learning forward for soft passages and snapping back for louder ones, sometimes with whiplash motions of his head. He seemed to be confined to a box, moving from measure to measure rather than phrase to phrase.

Lecce-Chong’s problems were most evident in the slow second movement, but he solved many of them with a sprightly and energetic rendition of the third-movement Scherzo, a dazzling combination of pizzicato and soaring woodwinds, capped by an outstanding piccolo solo. He then set a furious pace for the Allegro con Fuoco final movement, eliciting forceful playing from everyone on stage, with impressive fanfares from the trumpets. At the end, Lecce-Chong’s tremendous energy carried the show. The question is whether he can harness that energy into a more expansive conducting technique.

Orion Weiss Takes Bartók at the Speed of Light

The pianist’s lightning-fast concerto was just one highlight in a solid program from the Santa Rosa Symphony.

A star turn by a young violinist, and strong conducting from guest Mei-Ann Chen started the new year off right in at Weill Hall.