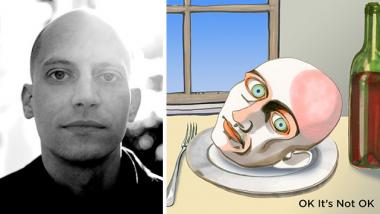 Think of Corey Dargel as a Noel Coward for the 21st Century. His songs are urbane and deceptively straightforward, with arch lyrics built of unusual observations, and on rhymes that seem both unusual and inevitable, all set to easygoing melodies with a distinctive musical thumbprint.

For some listeners, no doubt, that thumbprint is in danger of becoming overworked: Dargel has released four albums (and a few internet-only collections) since 2006, and though the more than 70 songs included in these releases vary widely in subject matter – how many composers would consider song cycles like “Removable Parts,” about amputation fetishism, or “Last Words from Texas,” based on final statements from executed convicts? – their mostly moderate tempos and ironic tone, to say nothing of Dargel’s laid back vocal style, give many of  them a sameness that Dargel will eventually need to escape.

You can hear him taking steps to recast that style on his latest collection, OK It’s Not OK (New Amsterdam), released at the end of January, although his departures here have more to do with expanding his textures than in reconfiguring his style itself. And given the quirky appeal of that style, I can’t blame him for wanting to hold onto it, and let it evolve without too hard a push.

The Opposite of Love (with Todd Reynolds) from Corey Dargel on Vimeo.

Dargel celebrated the release of the album with a concert at SubCulture in New York on Saturday evening. He performed all 14 of the album’s songs (plus an unreleased song, as his finale), with the ensemble he recorded them with, an indie classical chamber group that includes the violinist Cornelius Dufallo, with James Moore on guitar, Wil Smith on electronic keyboards, and Eleonore Oppenheim on bass.

Dargel’s works have always been a species of chamber music, but Dargel’s voice, not surprisingly, has always been central. Here, it often shares the spotlight with the accompaniments: The exquisite violin lines that adorn about half the songs are particularly crucial. Sometimes riffy, sometimes almost Baroque, but fragmented, they provide a vibrant commentary that offsets Dargel’s laconic vocal lines and, thanks to digital looping, they are often alluringly contrapuntal.

Dargel’s works have always been a species of chamber music, but Dargel’s voice … has always been central. Here, it often shares the spotlight with the accompaniments.More like a rock singer than an oldstyle classical composer, Dargel freely tinkered with his arrangements, often departing from those on the recording. “The Opposite of Love,” one of the album’s most compelling tracks – its refrain, “the opposite of love isn’t hate; it’s pity,” may or may not be true, but it forces you to consider the notion – was performed on Saturday with Dufallo’s looped violin as its principal accompaniment, an arrangement much sparer than either the version on OK, It’s Not OK or the 2010 version on the “Every Day Is the Same Day” EP.

Dufallo’s violin was also central to “On This Date Every Year,” a song in which Dargel imagines a lover dying in a plane crash, and decides, in the final verse, that tragic as that would be, it would have its upside:  “Everyone will be so accommodating / And when someone else makes a pass at me / I can stop equivocating / The way I had to do when we were dating.” Elsewhere, Smith’s keyboards provided everything from light organ textures to percussion samples and accordion-like timbres, with Moore, somewhat more restrained than on the recording, switching between graceful classical guitar lines and patches of crunchy electric guitar chording. The spirit, if not the sound, of a garage band is evoked, at least in the sense that some of the sound sampling has a low-tech, DIY quality.

There are other evocations of the Zeitgest as well, always a specialty of Dargel’s. In “Your Profound Self Doubt,” he sails through references to Twitter, Facebook, and internet sex-bots, observing “You measured your worth / By your number of followers,” but noting his own tech-induced disconnection as well: “If I had seen / The note you wrote on Facebook / I would have called you right away / But getting cable installed at my place took / Almost an entire day.”

Dargel’s performance was preceded by a short set by Matt McBane, a violinist and composer who performed unaccompanied violin works from what he said was a work in progress. There were some striking ideas here: The music included folksy melodies, sometimes over an open-string pedal point, neo-Baroque explorations and, in one case, fairly brazen lifting from Philip Glass’s early work.