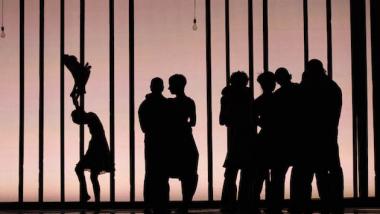 An impeccable pairing of music and dance, World’s on Fire, the latest offering of ODC, premiered Thursday night at YBCA and ran through the weekend.

Teaming bluegrass/old-time string band The Crooked Jades with nine superb ODC dancers, World’s on Fire, created by associate choreographer Kate Weare and expanded, with co-direction of ODC founder Brenda Way, from its original quartet state, is kinesthetically as generous and iconoclastic as the instrumentation and harmonies the Jades bring to the stage.

Old-time country music is often marked by haunting, edgy harmonies that play off against the melodies, the better to resolve its intentional discords in a gorgeous unanimity of spirit. So it is with the dancing.

The piece has ambitious goals: to represent and reflect on rural America — what unites and divides it, and by extension the rest of the world, raising the burgeoning issues of culture wars, feminism, racism, homophobia, passion, and love — as well as the processes of growing, struggling, and rejoicing in community. Tall orders in any vocabulary, and the wonder of World’s on Fire is the speed, innovation and impact of what comes to the stage.

The hour-long show opens with Lisa Berman (no relation) playing the Dobro (a kind of slide guitar) and singing. She’s quickly joined onstage by Jeff Kazor, who founded the Jades in 1994, singing and strumming the banjo. The group is completed by Erik Pearson on guitar and banjo, Megan Adie on double bass, and Emily Mann on fiddle. There’s also a harmonium. The Jades’ skills encompass composing, storytelling, classical performance, and musical anthropology. Musicians are a curious lot, and these artists’ curiosity seems boundless.

Time to dance. One man is lying on the floor; one woman sits beside him, as if at his bedside. Two dancers grab her, sweeping her into plies and leaps. Now two of the women flutter their hands near their temples, as if picking up the band’s soundwaves, or flicking away some notion that’s just arrived upon them. They and the other women are in gingham-ish print dresses with full skirts that eventually will be taken off, revealing silky slips for more private moments; put back on for more public ones. Like life, these moments come and they go. The lighting shifts, rising and dimming with changes of tune and moods. We also see the women’s white underpants, modest yet openly on view in wide-legged lifts and turns. Men take off their shirts in candor or passion, and men and women both grab miscellaneous shirts as banners to wave — or, for one woman, to replicate the scandalous moment with the nymph’s scarf, from Nijinsky’s Afternoon of a Faun, and re-gendering it.

The men are in casual rural garb and some wear suspenders; two fellows with sport jackets and short hair are probably townies — and rabble rousers. Costumes are by Sarah Cubbage and Mary Domenico; stage design and lighting are by Alexander V. Nichols, and Greg Kuhn is the sound designer and engineer.

There is more sensuality to come, between men, women, or men and women, and it takes on various tones of defiance, stealth, openness, and joy. There are other tunes that signal drinking in a bar — you know because the song mentions it, for one thing, and also because of the reeling blows and throws the townies exchange with the rural menfolk, who sometimes instigate the conflict. There is vigor, excitement, and danger, but the women are not above whipping up their own conflicts, either, and temperatures run palpably high. So does restlessness. One man sings that he’s going “off to Cal-i-for-ni-a, and even Lucy Mullins will turn her eyes my way.” Another man leans back, eyes to the ceiling, then drops into a backbend as the double bass keeps him company. Another fight, between a black guy from the country and a menacing white guy in a jacket, a bully, grows rapidly into a four-man rumble.

There’s a lovely moment — perhaps not as funny as it seemed to this viewer in the middle of the quiet house — when a woman exacts revenge on her prideful partner for his misbehavior, straddling his back and gradually, strike by strike, hammering his head down to the floor. You’ll likely find striking moments of your own in World’s on Fire’s rich brew of encounters, alliances, tensions, fissures and reunions.

As an encore, Jeff Kazor offered his lyrics to the audience, who enthusiastically clapped along with the entire cast in his call-and-response “Heaven’s Gonna Be My Home”:

The venerable performance space inaugurates its fifth decade with a full slate of exhibitions, parties, and special events.

Choreographer K.T. Nelson’s piece Dead Reckoning is a delight, while the troupe’s work based on Ai Weiwei looks confined outside of Alcatraz.