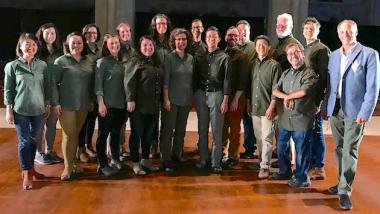 The Camino de Santiago — the Way of St. James — has been the route of pilgrimage to the Cathedral of St. James in Compostela, in northwestern Spain, since at least the 12th century. Even today, more than 200,000 pilgrims annually walk one of the traditional routes to Compostela, in faith and fellowship. On Friday, you could get a taste, however small, of what it’s like to be a pilgrim, if you were lucky enough to be in the tiny 175-member audience for Path of Miracles, performed at San Francisco’s Grace Cathedral by ODC Dance and Volti, the superb contemporary-music profession chorus.

Path of Miracles is nominally a dance choreographed by KT Nelson to a choral score by the British composer Joby Talbot, but that description is far too dry and literal for this magnificently integrated piece. Gesamtkunstwerk — total work of art — comes much closer, if you stretch your understanding of the term so that the artwork encompasses the audience and the very bones of where it’s performed.

It’s not that Path of Miracles is site-specific, because it could be adapted for performance in many large ecclesiastical spaces. It would surely lose some of its historical, religious, and emotional resonance if performed in a secular space. But it’s more than a choral work and more than a dance. It’s a dance whose choreography includes the singers. Not only do the singers and dancers move through the same performing spaces, around and between each other, but at times they interact physically, with the dancers touching, lifting, carrying, directing the singers. And because the audience moved in procession with the performers around Grace Cathedral, we became a part of the performance as well, pilgrims in the space, though our physical involvement was obviously far less than that of singers and dancers.

Nelson’s choreography possesses a language all its own, a broad repertory of deeply expressive, yet ambiguous, gestures and moves. I could not begin to say what a particular shake of a hand near the dancer’s neck might mean, or represent, and yet it had a touching power. The dancers slid on the stone floors, wrapped themselves around each other, shook, tangled and untangled on the floor, walked regally, carried each other, explored each other, depended on each other. Their focus, their intimacy, their community, all reflected the community and intimacy of a pilgrimage, where the pilgrims’ lives become intertwined and intimate for the duration of their travels together, and drew the audience deeply into the performance.

Path of Miracles, the choral work, is a narrative about the pilgrimage to Santiago de Compostela. Both Talbot and Nelson have walked the Camino de Santiago, Talbot following the death of his father, but before he composed Path of Miracles, Nelson after first hearing Path of Miracles. The text is partly written by Robert Dickinson, partly drawn by Dickinson from the Codex Calixtinus, a medieval manuscript associated with St. James and the pilgrimage.

Divided into four parts, corresponding to important locations on the pilgrimage, the text recounts the story of St. James, the dangers pilgrims face, the companionship of the pilgrimage, miracles performed by saints, the beauty of the landscape through which pilgrims pass on their way to Compostela, and the spiritual voyage of a pilgrimage.

Those four locations are Roncesvalles, Burgos, Leon, and Santiago, and they had their analogs in Grace Cathedral. For the first section, the audience members were led by guides to the seats in the choir area at the front of the church. The chorus sang from the very front, most of the dancers danced between the benches where the audience sat. The music started with a deep rumbling from the chorus; you might have thought they were just warming up, but no, it was truly the beginning.

The guides then led us to the northern arm of the transept for the second section. For the third section of Paths of Miracles, the dancers split into several groups of two or three, and danced in separate areas of the Cathedral: a side chapel near the front of the church, the labyrinth at the back, the north aisle. During this section, the chorus sang from above, at the very back of the church, with conductor Robert Geary leading from the floor, and the audience was free to wander from dance group to dance group.

Path of Miracles is richly conceived, written for a chorus divided into 17 parts (SSSSSAAAATTTTBBBB) and unaccompanied except for crotales (antique cymbals). Each chorister must be a fully independent soloist within the chorus, and the singers performed the 80-minute work heroically, with beautiful sound, stupendous musicianship, and superb tuning. All this, while moving around Grace and becoming a part of the dance. The only fault one could find wasn’t really the fault of the singers: because of the resonant acoustic of the cathedral, the words came through only occasionally. The program didn’t include Dickinson’s beautiful and powerful text, a copy of which Volti kindly provided to me.

In Talbot’s music, I heard echoes of chant, Arvo Pärt’s “holy minimalism,” calypso, medieval polyphony, and other styles. I would not have been at all surprised had the chorus burst out in the joyous cascades of Notre Dame polyphony. Whether Talbot routinely deploys so many styles within one work I can’t say, but somehow there was unity within the variety, and enormous beauty within the unity. The choral work is in no way diminished when performed with Nelson’s choreography, and yet it would be good to hear it on its own, to give it all of one’s attention.

Path of Miracles: a choral drama, a dance, a participatory ritual, a work so deeply integrated and powerful, at conscious and subconscious levels, that the only possible comparison is with Einstein on the Beach, another unclassifiable theatrical work combining dance, theater, and music into a seamless whole, both leaving their audiences exalted and elevated to another realm.

Choreographer K.T. Nelson’s piece Dead Reckoning is a delight, while the troupe’s work based on Ai Weiwei looks confined outside of Alcatraz.

Volti Sings of Longing and Desire

Three world premieres are featured in Volti's concert "Want Me: Songs of Longing and Desire" at the visually arresting St. Gregory of Nyssa's Church.

The ensemble achieved sublimity in their rendition of a movement from Joby Talbot’s Path of Miracles.