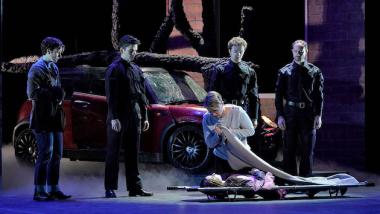 When an opera company decides to stage Christoph Willibald Gluck’s Orphée et Eurydice there are any number of issues that have to be considered beginning with which version: the original 1762 Italian or the 1774 expanded French version with its multiple ballets. And if you go with the French version, you’ll need the choreography and dancers to sell it.

Los Angeles Opera is currently presenting an updated, radically different interpretation of the opera. It is adapted, directed, choreographed, designed, and costumed by John Neumeier, since 1973 the director and chief choreographer of Hamburg Ballet.

Neumeier’s production makes Orphée a closeted homosexual. His lamentation over the death of his wife, Eurydice, his perilous journey to the Underworld and last-moment failure to bring her back, are a desperate attempt to deny who he really is and then to come out. Neumeier, it should be noted, is gay and notorious for rocking the boat when it comes to reinterpreting the classics.

The production, which opened Saturday at the Dorothy Chandler Pavilion and plays through March 25, also marks the Joffrey Ballet’s first collaboration with L.A. Opera. As choreographed by Neumeier, the staging takes full advantage of the Joffrey’s diverse skills, from athletic modern angularities, with bent-knee lifts, crooked elbows, and martial arts jabs, to classically pure lines and serenely beautiful ensembles. The principal dancers include Victoria Jaiani (as Eurydice’s double), Temur Suluashvili (as Orphée’s double) and Yoshihisa Arai (as the guardian of the Underworld, Cerberus).

In this co-production with Lyric Opera Chicago and Hamburg Opera, Orphée (like Neumeier) appears as the director/choreographer of a modern ballet company. As the overture begins, conducted sumptuously by James Conlon, the corps is deep in rehearsal, with every plié scrutinized by Monsieur Orphée, sung by the bright-voiced tenor, Maxim Mironov. His doting (but nameless) male assistant is effectively sung as a pants role by soprano Liv Redpath. She also doubles as the opera’s third principal character, Amour, the god of love.

“Amour,” Neumeier writes in the program, “will always accompany Orphée. I think he, Amour, is in love with Orphée. This is why he has this idea, to take him on his imaginary journey.” Neumeier’s direction heavily implies that Orphée is also in love with his assistant.

Enter Eurydice, sung with spirit and pathos by soprano Lisette Oropesa. She is the company’s feisty prima ballerina. A heated (unsung) argument ensues climaxing with her viciously slapping her director/ husband’s face. She storms out.

Moments later, to the sound of screeching brakes and shattering glass, her car slams into a tree and she dies. When Orphée receives the news on his cell phone, his reaction is strangely vague and confused. There is no emotional outburst. Is he in shock? Or, is he, perhaps, weighing his options? When the members of the company attempt to console him, he spurns their attention. It’s at this point that Amour (now in the guise of his assistant) convinces him to undertake his “imaginary journey” into the Underworld.

Passing through a mirror (a nod to Jean Cocteau’s version of the myth), he encounters the women of the corps de ballet as the Furies. After seducing them with his dulcet voice he arrives in the Elysian Fields, which oddly resemble a monochromatic community of postmodern condos. Eurydice doesn’t know what to make of her husband’s arrival. Just moments before she had been singing about how nice it is being dead — no more anxiety, no more domestic strife. She’s clearly ambivalent and wondering whether her husband undertook this journey out of guilt.

Warned not to look at his wife, Orphée labors to bring her back to the “real” world, while she complains about his apparent indifference. When the fateful glance finally comes, it seems more an act of frustrated relief (for both of them) than some expression of uncontrollable passion. In fact, passion is the one aspect in their relationship that’s sorely lacking.

Gluck’s opera, unlike any other telling of the story, offers Eurydice a third chance at life. But in Neumeier’s staging, she returns like one of Bluebeard’s wives, zombie-like in a ghostly white wedding dress. As the company dances the finale, it’s the loving Assistant/Amour at Orphée’s side, not Eurydice.

During the course of the opera, I found myself conflicted, trying to unravel Neumeier’s intentions and how they did, or did not, relate effectively to Gluck’s opera. This was particularly an issue in his treatment of Eurydice, who would certainly be better off dead by the end of this production. And if the intention was to transform the opera into an ode to gay identity and male bonding, why not do so without ambiguity? Take a cue from Matthew Bourne’s Swan Lake.

Throughout the performance, James Conlon’s conducting combined a sense of period elegance with bright orchestral focus, accentuated by impressive off-stage choruses performed by the members of the Los Angeles Master Chorale prepared by Grant Gershon.

Neumeier’s choreography proved playfully effective in the context of the rehearsal room, emotionally compassionate in the scene when the dancers (in black) console their director, and spirited in the characterization of Furies and the Underworld. But by the time the final ballet arrived, the tool box was empty, as was the choreography.

Orphée et Eurydice offers audiences an opera and a ballet bonded to an intriguing theatrical experience. It would have been better with a clearer and less one-sided production.

L.A. Opera and Beth Morrison Projects explore the intricacies of Ingmar Bergman’s film in an opera by Keeril Makan and Jay Scheib.

A Strangely Wonderful Trip to the Moon From Disney Hall

The L.A. Philharmonic's production of Andrew Norman's opera for children is a joy.