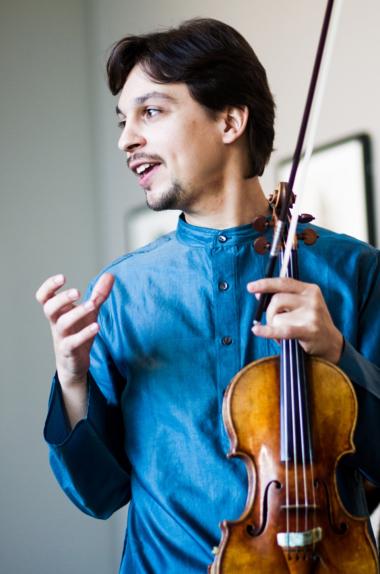 Delirium Musicum Shows Off Its Versatility

The string orchestra Delirium Musicum has a fantastic, nourishing sound. Their performance of Iannis Xenakis’s Aurora was exquisite to listen to with eyes closed — Xenakis’s shapes came out so clearly, much like watching flocks of starlings in murmuration. This self-conducted ensemble is very efficient in its emotional and textural blend, which suits works like Xenakis’s and also Arvo Pärt’s Silouan Song perfectly, where composers rely on an ensemble’s ability to turn on a dime, play as one, and to disappear into each other entirely.

Artistic Director Etienne Gara, a violinist, has a clear vision and musical sensibility, which is a desirable trait in an ensemble leader. As the concert progressed, however, I began to wonder if it was tasteful to approach all the pieces with such a heavy Romantic hand. In its mission statement the group touts “creative and unapologetic interpretation,” which is certainly enlivening to watch in an ensemble, but their dramatic bent ended up leaving me with a feeling of homogeneity despite the differences in the music of the evening.

This is not to say their sound lost impact. Despite being distracted by the effusiveness of Gianluca Bersanetti’s arrangement of J. S. Bach’s Chaconne from Violin Partita in D Minor, Delirium Musicum’s bright and unified sound continued to be shiver-inducing.

On the program, on Friday night at USC’s Cammillieri Hall, a concert sponsored by USC’s Brain and Creativity Institute, was Steve Reich’s now classic (now classic ...) Clapping Music, performed by the whole group divided in three parts. One of Reich’s early “process” or “phase” pieces, its aesthetic is mechanical and deadpan. The joy comes from hearing the starting rhythm appear, disappear, and appear again, to get lost listening. Delirium added accents and dynamic changes, including accents on the downbeat of every bar. It was fun, but they obviously felt that they had to inject drama into a piece that is fundamentally about the joys of natural intricacies, a rhythmic pattern that becomes offset and then returns to a unison.

Florence Price’s Andante Moderato from her Quartet in G Minor really did deserve the extra sauce served by Delirium. Price (1887-1953) was an American composer who trained at the New England Conservatory with George Chadwick and this movement was rich with what felt like Golden era Hollywood sighs. All the playfulness of the middle section, sly rubato, and bounciness was well-matched with this over-the-top approach; I wish they had performed the entire quartet.

(born 1964), Delirium Musicum’s resident composer, is an Italian-born American who primarily writes in a Baroque style. No matter how seamless the work is or how well it is performed, I don’t think he should ever expect to not be asked, “Why?”

In a 2010 interview with the online magazine Stay Thirsty, Bersanetti defended his art by calling it a pursuit of craftsmanship, which he finds more productive than the constant pursuit of innovation. I appreciate the investment in honing early kinds of craftsmanship, though I admit, as a composer I would never have thought to base a career in this kind of historical production. (Many musicians have, however, as Brett Campbell shows in this SFCV article.) Last night, they performed his String Concerto in E Minor; sprinkled throughout the program were Bersanetti’s arrangements of Rameau, Bach, and, as an encore, Brahms.

It’s hard for me to form an opinion of a new Baroque piece because I don’t know the language and conventions of Baroque music that well. We, the audience, are meant to take the experience at face value, but when the composer dedicates so much of his time and effort into historical craftsmanship, the details of the construction become important. The showy variety in dynamics and occasionally wild stretching of time were surprising. Near the end of the first movement, there was a giant deceptive cadence that was the sonic equivalent of a false nose. The music never really shocked me out of thought.

Delirium Musicum shows its mettle in a wide-ranging program with a world premiere.