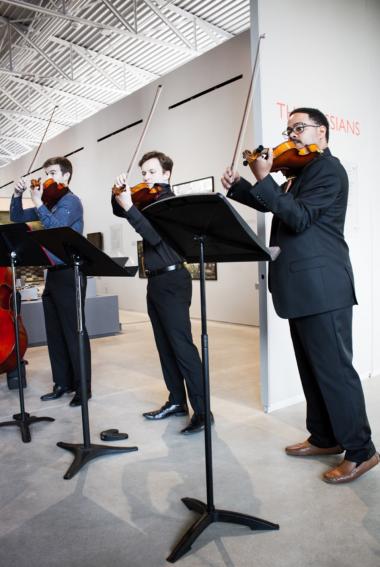 Delirium Musicum’s Sunday program at the Greystone Mansion was dominated by the sound of violins. The young string ensemble made their way through a difficult program with ease as the guests of the Music in the Mansion event in Beverly Hills. The violinists in the group far outnumbered the other instruments, giving the ensemble a bright and brilliantly quick sound.

French violinist and leader Etienne Gara proved an energetic presence in front of the small orchestra, bantering with the audience between pieces. His violin playing was particularly on display during works by Brahms, Vivaldi, and the world premiere of a Concerto for Two Violins by composer Gianluca Bersanetti, the ensemble’s composer in residence.

As Gara explained to the audience before the premiere, Bersanetti often writes in a style deemed “contemporary Baroque.” True to the description, the concerto celebrated the harmonies and rhythms of the period, while featuring standout playing by violinists Gara and YuEun Kim.

At moments together, at others dueling, the violinists shared a similarly bright and light tone which lent itself to the rapid Baroque passages. Most importantly for a double concerto, they matched each other’s intensity and volume.

Of all the three movements, the second felt the least Baroque. A modern melody on the cello formed a repetitive bass line beneath the two violinists. The movement was clean and effective, using a dance-like rhythm to space out the fast playing between the first and third movements.

It was notable that Gara thought it necessary to explain the style in which the work was created. For me, the work felt fresh enough that no explanation would have sufficed. The premiere was a success. Even juxtaposed with Baroque music on the program by Vivaldi and Locatelli, this piece held its own in a way that many premieres fail to do. The composer’s presence lent an air of excitement to the intimate concert in a small hall in a mansion tucked away in the hills.

Brahms’s Hungarian Dance No. 4 was a clear highlight of the afternoon. Gara and violinist Kyle Gilbert traded off on Brahms’s rhapsodic and brilliantly fast violin lines. The performance careened with a gypsy energy that left the audience smiling.

The piece features Hungarian folk melodies, rapidly accelerating before slowing down for added effect. The first melody of the piece, although in a folk style, is cradled by the wondrous Romantic harmonies of the German composer.

Gara, playing the role of the showman, smiled and turned around to face the other violinists as he performed the flying passages. Both soloists played with a notable precision in these rapid moments, invoking the rhapsodic fiddling of Hungarian violinists.

Minimalist composer Steve Reich’s 1972 Clapping Music provided a change of pace. The whole ensemble put their instruments aside and split into three groups that clapped different versions of the same rhythm, changing with each repetition before coming together at the end.

Although in a style completely different form the previous pieces on the program, the work explored rhythm in a way that felt appropriate alongside the Hungarian Dance. After the music ended, several audience members clapped the rhythm from the piece during the applause.

Gara continued to impress on Vivaldi’s “Summer” from The Four Seasons. The ensemble brought a ferocious and rhythmically mesmerizing account of the work. The small hall pulsated with energy.

The players encored with the “Skip” movement from Andrew Norman’s Peculiar Strokes. The non-melodic piece features bows skipping and bouncing across the strings in a chaotic chatter. It was as far from Vivaldi as we could get yet celebrated the stylistic range of these string players.

Delirium Musicum, in just its first season, is a promising ensemble. They managed to make a program of non-related music sound cohesive. They play with a bright and balanced tone, suited well for the early repertoire they chose for this program. I will be curious to see if they can maintain this balance if they add more players to their ranks.

The hip, conductorless ensemble ranges seamlessly from a contemporary work based on an Indian theme to a Mozart classic.