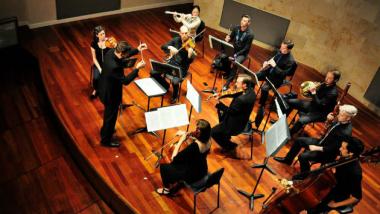 Be'eri Moalem on September 1, 2015
With his “Curious Flights” concert series, clarinetist, impresario, and British cultural ambassador Brenden Guy has been injecting rare and exciting music into the local music scene. The season-opener, on Saturday, August 29, at the San Francisco Conservatory of Music combined a diverse program of 20th-century U.K. compositions and top-quality musicianship by almost 50 participants.

Soprano Julie Adams kicked things off with John Ireland’s Songs Sacred and Profane (1929-31), accompanied by veteran pianist Miles Graber. Adams has a powerful operatic voice and a dramatic, glowing stage presence. However, she sometimes gave too much volume for the intimate acoustics of the hall and the lullaby character of several of the songs.

Herbert Howell’s Rhapsodic Quintet, Op. 31 (1919) was fascinating. An ever-flowing stream of textural ideas and layers of melody kept me interested throughout the piece, and was complemented by excellent playing from  the One Found Sound string quartet (Christopher Whitley, violin; George Hayes, violin; Danny Sheu, viola; and Laura Gaynon, cello). Composed mostly of recent SFCM grads, the expressive energy flowed naturally. The quintet was led by Whitley, who gave it his all, huffing and puffing louder than Guy, on clarinet. The heaving was more than excusable because it inspired the rest of the ensemble to match his efforts. Guy blended seamlessly with the strings. The choir sang with heartwarming enthusiasm, their voices glowing in happy harmony.

Simon Berry, conductor of the St. Dominic's Schola Cantorum, chose some better-known 20th-century British composers: Vaughan Williams, Benjamin Britten, and the lesser-known but for his joyous hit My Spirit Sang All Day, Gerald Finzi. The choir sang with heartwarming enthusiasm, their voices glowing in happy harmony. In Britten’s The Shepherd Carol, members of the choir sang some mesmerizing solos — like pure and genuine folk songs from the green, English countryside.

By the end of the first half, my ears started to pick up the distinct patterns of first-half-of-the-20th-Century English classical style. Smooth voices lead across pandiatonic harmonies where intervals of seconds, sevenths, and fourths are favored. The “dissonances” create a foggy soundscape upon which quirky, chipper melodies or long, lugubrious ones are overlayed. These techniques still sound fresh — some of the compositions sounded contemporary even though they have been around for at least two generations.

The grand finale was Britten’s Sinfonietta, Op. 1 played by the Curious Flights Chamber Ensemble. It’s a fun and interesting piece, especially for a first opus — sounding already up to par with the composer’s more famous operas. The relatively new ensemble of young musicians likewise sounded very good, on par if not better than some of the local chamber orchestras that have been around for decades. John Kendall Bailey did a great job conducting the ensemble, keeping the music light, crisp, and energetic.

Only in its second year, “Curious Flights” is living up to its mission of seeking out rarely-performed works played by talented local musicians. Three more concerts are planned for this season, including a Veteran’s Day recital with music composed around the time of the World Wars, a composer in residence from England in March, and a huge symphonic-choral production in May.