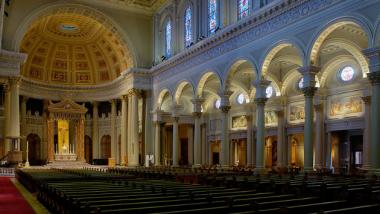 Gloriously situated atop Lone Mountain with views of the Pacific Ocean and the bay, St. Ignatius Church is a magnificent setting for a concert. With over 100 singers filling the apse of the lavishly ornate church on Saturday, August 15, the San Francisco Choral Society performed Mozart’s Requiem with a grandeur that equaled the surroundings.

On the program were actually two works by Mozart: the Vesperae solennes de confessore and the immortal Requiem. The Vespers service was written in 1780 when the composer was 24 and still in service to the Salzburg court. Charming, yet not quite representative of Mozart’s later potential, it was a nice warm-up piece. Keeping the large vocal ensemble together, conductor Robert Geary laid down a boldly muscular beat. The orchestra felt a bit hushed and subdued in this introductory piece.

After intermission, it was a different story. It sounded almost like a different composer — a different era even. The Requiem, famously unfinished at the composer’s death, shows nearly a complete transformation of his style, 11 years after the vespers. The choir sang with focus and an intensity that is more often heard in enthusiastic, “amateur” groups than from professional singers.. The raging “Dies Irea” was particularly good, fired by Geary’s impassioned direction. Geary conjured the Romantic side of the work, rather than its Classical roots. Beethoven usually gets credit for kicking off the Romantic era in music, but after this concert, a case could be made for Mozart.

Soprano Shauna Fallihee was stunning, with a clear tone and artfully phrased lines. Alto Kindra Scharich, sang with a sweet sound and pure focus. Tenor Michael Desnoyers’s solos were beautiful and direct. Bass Eugene Brancoveanu sang with a strong and steady voice that was occasionally grating and overpowering.

The California Chamber Symphony, a loosely associated collection of local freelancers held their own. The strings accompanied the vocalists with sensitive tone and tight articulation, which cut through without covering the singers. The winds and brass were situated across from the the strings rather than behind them, infusing the orchestra with richer colors than usual.

The Requiem, well-performed, has a mesmerizing effect and the S.F. Choral Society’s playing of it sent me into a sort of musically-induced trance.