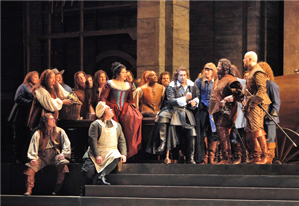 Conventional buzz has it that Franco Alfano’s Cyrano de Bergerac is a second-rate opera that has been revived solely as a vehicle for 69-year-old tenor Plácido Domingo. While it is doubtful that anyone is going to walk down the street whistling one of the 1936 opera’s extended love duets, the combination of Théâtre du Châtelet’s gorgeous production and an extremely strong cast have created the indisputable highlight of San Francisco Opera’s fall season thus far.

First, there is Domingo. Having broken all records in the annals of great operatic singing by giving nearly 3,500 performances of more than 130 leading roles in operas by some 40 composers, he sounded wonderful at Sunday’s opening matinee at the War Memorial.

Despite General Director David Gockley’s announcement after Act 1 that the tenor was feeling indisposed, Domingo carried on. The bit of a hard edge that I could detect from Row H soon vanished, leaving Domingo’s prized, darkly shining tone unblemished by illness or age. I know it sounds as though I’m respectfully overlooking inevitable signs of vocal decline, but in this role, I didn’t hear them. Domingo sang magnificently through the opera’s conclusion, with no signs of fatigue or pushing.

As Roxane, the woman from whom Cyrano hides his love until it’s too late, soprano Ainhoa Arteta produced exceptionally strong, gleaming tone. The voice may lack vulnerability, but Arteta’s physical beauty and ease onstage made for a powerful portrayal.

Making his SFO debut as Christian, tenor Thiago Arancam sounded suitably young and ardent, and his lighter instrument contrasted well with Domingo’s. Handsome, to boot, he was coached by director Petrika Ionesco to overact just enough to appear dumb.

In the opera’s well-stocked baritone department, season staple Brian Mulligan sang as beautifully as ever, and made the most of his comedic scenes. Timothy Mix’s dark instrument was ideal for Le Bret, while Lester Lynch’s mellifluous top made for such a beautifully sung Carbon as to bring into question why he was the only major baritone in the cast not to step forward for second bows at opera’s end. Stephen Powell sang quite well as De Guiche; Adler Fellow Austin Kness finally had his opportunity to stand out from the pack by singing three smaller roles; and former Adler Fellow Bojan Knezevic mustered a few lines before falling down drunk in yet another opera.

What’s It All About?

The opera is about love, of course. More specifically, love, lust, and death — but in grand proportions. Just like Aida, Werther, Madama Butterfly, and, if you consider the end of deception as a death of sorts, Le nozze di Figaro.

Librettist Henri Cain’s adaptation of Edmond Rostand’s play Cyrano de Bergerac may begin in a theater, yet it follows a long-standing operatic convention by sending its leading lady to a convent. In between comes a love rectangle, in which the supreme swordsman, freedom fighter, and poet Cyrano is prevented from realizing his love for the beautiful Roxane because of his ugly nose. Instead, he finds himself pledged to defend his rival, the young and handsome recruit Christian. Unable to express his love directly, Cyrano sublimates it in a never-ending series of enrapturing love letters that he sends Roxane on Christian’s behalf.

Although Cyrano maintains the pretext of Christian’s romantic eloquence until the end, the young man’s life is cut short in a battle set up for defeat by yet another of Roxane’s wannabe lovers, the despicable De Guiche. Fifteen years later, during Cyrano’s final visit to Roxane at the convent, she realizes that the man who wrote the letters that won her heart is dying in her arms. As hackneyed as that ending may read, the final scene is beautifully executed and quite touching.

Thanks in no small part to a spectacular production and enrapturing orchestral playing, many scenes linger in the memory. In addition to energetic direction and original lighting design by Ionesco, more spectacular lighting from Christopher Maravich, and wonderful period costumes by Lili Kendaka, the beautiful, massive sets are a feast for the senses. Silver, gold, sparklers, and fire; flying dancers, master acrobats, and swordfighters coached by François Rostain, Jonathan Rider, and Lawrence Pech; and striking visuals — all make the opera as entertaining as it is moving.

Alfano’s lush score sweeps the action along, then lingers when tenderness comes to the fore. Conductor Patrick Fournillier’s ability to coax the violins into translucence, and percussion into exclamation, all but guarantees his return to the pit in San Francisco.

Should you expect to cry your heart out as at Madama Butterfly? No, but you may, nonetheless. You may feel no burning desire to buy the DVD, other than to savor Domingo up close, but you will definitely want to stand and cheer. A tour de force in every respect, Cyrano de Bergerac is a must-see.