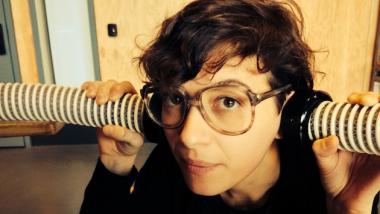 Take a walk down the hallway at a busy music school and you’ll hear bits and pieces of music-in-progress. Alongside snippets of familiar works, you’ll hear the more humdrum sounds of music being put together: the tricky leap from one note to another, a tone being coaxed into its proper intonation, a bow stroke repeated on an open string until the articulation is just right. These are the sorts of sounds that came to mind as I heard Czech composer Lucie Vítková’s OPERA at Roulette in Brooklyn on Wednesday evening. It was easy to imagine myself wandering through a practice-room-lined hallway, just happening to come across these noises. Vítková’s reliance upon such quotidian sounds represented both the piece’s most interesting dimension and its limitations as a “whole evening piece,” as it was described in the program notes. 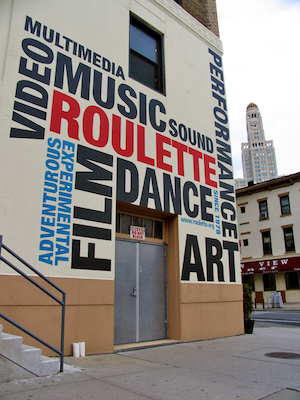 The piece was a world premiere commissioned by Roulette. It features six singing instrumentalists, all women, who play accordion, harp, theremin, oboe, flutes, piano, whistles, and saxophone. The composer performed, as did musicians Sophie Leetmaa, Sydney Viles, Martha Cargo, Carolyn Hietter, and Sky Macklay. The piece unfolds in several self-contained sections with conventional operatic titles — arias, recitatives, scenes, and so on — and distinctly unconventional content. The libretto is perhaps the piece’s most experimental aspect. It draws from texts by the philosopher Adriana Cavarero that deal with ideas about vocal expression, which Vítková has rendered effectively inscrutable by translating them into Morse code.

OPERA includes an array of genuinely fascinating sonic ideas. A vocalist held a sheet of plastic near her mouth, singing directly into it. A harpist played while other musicians wandered across the stage to attach ribbons, cloth, and what looked like a knit hat to the strings; these accouterments sank to the base of the instrument, changing its sound as they accumulated. An accordionist, playing and singing at roughly the same pitch, shook the instrument gently back and forth and wavered her voice to match, creating an engrossing multitimbral blend.

Alongside these unusual experiments, OPERA features a variety of more familiar sounds. Voices collided and coalesced in the microtonal spaces around a central note. Performers inhaled and exhaled loudly, making their physical effort audible. These were the noises that reminded me most obviously of the music-school-hallway effect; they sounded like music being put together via its essential building blocks. Other elements of the production evoked a similarly quotidian feel. Performers brought water bottles and iPhones onstage. They appeared at first in casual clothing, looking as if they had strolled in directly from the trendy Brooklyn streets. (This everyday look meshed well with other artistic elements of the piece, so I was a little perplexed when the performers appeared later in the piece in high-fashion getups.)

Vítková’s sound-world might be described as music turned inside out. Through sounds both strange and unremarkable, she puts the seams of music-making on full display. You hear the stuff in the nooks and crannies rather than the glossy facade. Yet I often wished that the surface would come more clearly into view. While many of these sounds were individually captivating, it was difficult at times to figure out what the parts had to do with the whole.

I wonder if my desire to hear more of the whole had to do with the fact that Vítková defined the piece as opera. While I don’t wish to venture into debates about what opera is or is not, I do know that this framing influenced my expectations as a listener. Yet the piece seemed more like an experiment or a happening, to borrow a 1960s-era term. There was a substantial gap between what I expected from a piece titled OPERA — basically, some sort of readily discernible narrative, and a sense of cohesion among the piece’s various aesthetic elements — and what I heard, and this gap felt more puzzling than productively dissonant. Would a different title have made for a different listening experience? Opera or something else, though, Vítková’s music made for a satisfyingly strange sonic excursion.