The long knives have already come out for this one — Lang Lang’s first (and second) go at what the publicity is calling the “Mt. Everest” of the classical keyboard literature, J.S. Bach’s epic Goldberg Variations. We expected that. Maybe he did too.

After all, the flamboyant Chinese pianist has been an easy target for attacks on his grandstanding manner in the Romantic piano repertory; his unabashed embrace of pop culture at the Olympics, the Grammys, and elsewhere; his premature stab at an autobiography in his 20s — and of course, his immense popularity. For me, Lang Lang has sometimes been a source of amusement, one of his best qualities — like the videos he made of playing Chopin’s “Black Key” Etude with an orange or demonstrating martial arts moves in the middle of a frenzied bout with Prokofiev (a.k.a. “Lang Lang Gone Mad”). 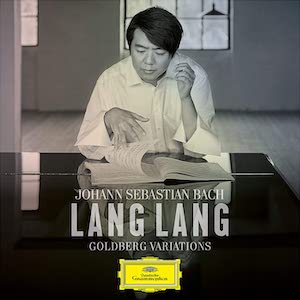 Now at 38, after recovering from a case of tendinitis in his left arm that sidelined him for a year, Lang Lang is trying to bolster his credentials as a serious artist by going deep into the symmetrical, contrapuntal, spiritual world of the Leipzig cantor. He has gone right to the source — recording the Goldbergs live on March 5 in one take in Leipzig’s Thomaskirche where Bach worked and lies buried, following it up 10 days later with a painstakingly assembled “studio” recording in Berlin’s Jesus-Christus-Kirche.

So that Lang Lang’s fans don’t have to decide, Deutsche Grammophon has issued both performances in a compact four-CD “book” with a 48-page photo-filled booklet suitable for gift-giving this holiday season. (The double-LP and two-CD editions contain just the studio version). This is not an altogether new way of marketing the Goldbergs; CBS and its current owner Sony did the same for Glenn Gould’s two famous studio recordings after his death — first in an LP box and then in a three-CD set A State of Wonder, including Tim Page’s interview with Gould as a bonus. Yet while the Gould set offers two diametrically opposed interpretations from 1955 and 1981 spanning his entire career, there isn’t nearly as much difference in the Lang Lang performances.

Lang Lang is mostly respectful to the monument — observing every single repeat, usually applying ornaments more elaborately to the repeat statement of each stanza as per Baroque performance practice. While the studio performance of the opening Aria is slow, limpid in tone, and the closing Aria much slower and hushed in volume, the live ones are a little faster and easier to listen to. We hear some variations through 19th-century filters — in particular No. 3 with Romantic rubatos and especially No. 25, phrased as if it was Chopin and taking over ten yawning minutes to complete its tedious course. Others go like the wind; No. 26 unleashes all of Lang Lang’s ability to play clearly at breathtaking speed in both renditions. He is not afraid to rewrite Bach in a few tiny instances — like adding a new 16th-note figuration in No. 7 in the left hand in the first pass while curiously playing the music as written in the repeat (he does this in both performances).

Clearly Lang Lang’s claim to have been thinking about this music for 20 years is borne out in the overall consistency of his ideas in both performances. If anything, the live one is somewhat freer in expression, more aggressive in attack in places, not as precise in execution, and I hear more joy in the playing, particularly the burst of high spirits after coming out of the doldrums of No. 25. One can sense the acoustics of the Thomaskirche (I’ve been there; it’s not a huge space and the reverberation is not overbearing) — and the real emotional impact of being in the same room as Bach must have influenced Lang Lang’s performance.

Ultimately, Lang Lang’s performances probably rank somewhere in the middle of the huge pack of Goldbergs that have come down the pike since Gould created a mass market for them (it’s now Bach’s most recorded keyboard work). You could do much worse; Simone Dinnerstein’s strangely-celebrated recording is laborious and drifting. My own favorites among piano Goldbergs remain the Goulds — with an edge for exhilarating 1955 over more reflective yet still stimulating 1981 — and Murray Perahia’s wonderfully shaped account.

As pianist Lang Lang hits the revered age of 30, he’s started to teach others hard-won lessons gleaned from his childhood studies in China.

He radiates joy in music, but is introspective in person. Here’s an interview with a musician who continues to inspire millions.