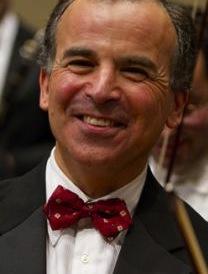 The popularity of one of J.S. Bach’s better-known works, Goldberg Variations, undoubtedly was spiked by two monumental recordings by the late Canadian pianist Glenn Gould. His 1955 recording launched his career, and along with it he took the work into the music world’s consciousness, after its having been largely dismissed as esoteric études for over 200 years. Since Gould’s initial album, it has garnered the attention not only of other pianists but also of arrangers and ensembles. In the last 50 years or so, particularly after Gould’s second recording in 1981, no fewer than 10 arrangements have been written for ensembles, ranging from a jazz trio to an orchestra. That should come as no surprise, since the music is full of polyphony, lending itself to ensembles.

On Friday at Herbst Theatre, the San Francisco Chamber Orchestra, under the direction of Benjamin Simon, presented a 1984 orchestration of the work by the Russian violinist and conductor Dmitry Sitkovetsky. Considered to be the most successful of all the orchestrations, it uses the principal chairs as soloists in a number of variations, a strategy that can be seen as solving the problems presented by the challenges of orchestrating a virtuosic keyboard work.

In fact, Gould’s recordings themselves were a transcription, because no instrument resembling a modern piano existed when the work was originally published in 1741. It was written for a harpsichord with two manuals, with no mechanism to control volume or timbre. Thus, Goldberg Variations and other Bach work were altogether radically different from how we usually hear them on a piano. Gould’s approach was not to mimic harpsichords but to interpret the variations as a full-fledged piano work.

In the hands of the SFCO, the quiet “Aria” was performed by a quartet consisting of the principal string chairs. The original was written in four parts, so the orchestration itself was straightforward. It was presented with a sense of purity, the concert mistress performing the aria with full ornamentations.

The joyously vivacious first variation in two parts was then performed by the entire orchestra with an impactful sonority that bloomed in the air. The second variation, in a trio, was performed without the viola section, then the tranquil third variation by the principal chairs again.

And so it went for 30 variations in a little over an hour — a journey in itself. Music Director Simon possesses a keen awareness of the voices and their distinct colors in the work, and he succeeded in teasing out various threads of different sizes, from the finest of the silks to the toughest of yarns. They were woven into a single cohesive work that presented the lines and phrases extremely clearly. Although I could not actually see the use of Baroque bows or gut strings among the orchestra, the purest of the tones were brought out through light pressure on the strings without the overzealous vibrato that often contaminates too many modern performances.

In It to Win It

Of all the variations, the 19th made perhaps the most effective use of the orchestrations. It was performed entirely in pizzicato except for the contrapuntal line that was played quietly coll’arco (with the bow). The pizzicato had the effect of a harpsichord with a lute (mute) stop: bubbly, with a silky backdrop. It was clearly the orchestra’s favorite variation, as it was mine.

Some difficulties were encountered along the way, however, due to the differences in the way the instruments produce sound. The harpsichord and piano being percussive instruments with a sharp attack, they obviously were more articulate in the fastest of the passages. In the 17th variation in two parts, distributed over four instruments, there was a tendency to rush in the descending-sixth intervals because of the difficulties in articulating the notes. Also, given that violins are more articulate than cellos, there was an overall tendency for the rest of the orchestra to be drowned under the brilliance of violins.

I am grateful to Benjamin Simon and the orchestra for casting the now-well-known work in a different light.

Yet the orchestra had a distinct advantage that may not be obvious to many listeners. It’s the question of intonation and temperament, which had a profound impact on the sound in the very chromatic 23rd variation. Tuning of keyboard instruments is inherently a compromise and often leaves various intervals quite out of arithmetic “tune.” Perhaps in well-temperament, which is still a compromise but optimized for one key, the variation could sound quite “out-of-tune” but may be a desirable effect, giving much discomfort to the listeners in an attempt to showcase the conflict and tension. However, the orchestra members, with their ears carefully adjusted to performing in different keys, succeeded in maintaining the purity of the sound, something that’s not achievable on keyboard instruments.

As a pianist and a harpsichordist, I listened to the performance with much pleasure, and I am grateful to Benjamin Simon and the orchestra for casting the now-well-known work in an entirely different light. Perhaps the fact that the work has garnered so much interest in creating arrangements for it is a proof of its greatness, and that Glenn Gould inspired interest in the long-neglected work was proof of his own. In turn, the San Francisco Chamber Orchestra on Friday proved its greatness by presenting a reinterpretation of the work in a very different world from where it originated, a monumental task in itself.