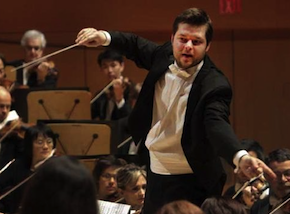 Guest conductor Juraj Valčuha gave the downbeat and led the San Francisco Symphony in a burnished performance of the opening tutti of Dvořák’s Cello Concerto in B Minor, Op. 104, to begin Wednesday’s concert at Davies Symphony Hall.

Then featured cellist Gautier Capuçon entered with his first solo, and it was like a visitor from another planet had dropped in. After the full, smooth sound of the orchestra, his high, light tone was so pinched and nasal that it cut through like a buzz saw. At times he appeared to be bowing very close to the bridge. When he applied heavy vibrato, which he did only in the slow passages, it produced a rattling stutter. At least his tone was so high and strong that Dvořák need not have worried about his main technical concern when writing the piece, that the cello would be drowned out by the orchestra.

Gradually, either Capuçon modified his playing style to better mesh with the orchestra, or I got more used to hearing it. It became easier to appreciate his mastery of expression of line. In the finale, he matched up well in energetic double-solo duets with Associate Concertmaster Nadya Tichman. Add to this Valčuha’s energetic leadership and some fine work by the orchestra — including robust orchestral cellos and a flawless solo by principal horn Robert Ward — and it was enough to convince me that this often soporific work really is a good cello concerto.

Capuçon applied a jaunty rhythm and rough humor to his encore, legendary cellist Gregor Piatagorsky’s arrangement of the March from Prokofiev’s set of children’s piano pieces, Op. 65 (possibly better known from its adaptation in the orchestral suite Summer Day).

After Capuçon’s departure at intermission, Valčuha, who is from Slovakia, turned from the Czech Republic on his west to the country on his south and gave us two 20th-century Hungarian classics. He enlivened Zoltán Kodály’s already jumpy Romany-tune casserole, Dances of Galánta, with jerking pauses, abrupt tempo changes, punchy phrasing, and sharply cut-off notes. Nudged by this approach, the music turned almost goofily comic and threatened to fly apart. What Valčuha also provided that held it together was enthusiastic drive.

The thoughtfulness he put into detail work was also apparent. For the many clarinet solos, sometimes he dropped his arms and let Carey Bell play ad lib. At other moments, Valčuha actually shaped the clarinet line in detail with his hands. The same cello section that had played so fluidly in the Dvořák displayed that same quality in its unaccompanied opening to the Kodály, with crisp attacks on the notes adding a sting to the melody.

The remaining work was Béla Bartók’s The Wooden Prince, here played as an abbreviated, continuous suite. It’s a ballet based on a fairytale of a prince who makes a wooden puppet of himself to woo a princess. Unfortunately for him, she falls in love with the puppet instead. Written between 1914 and 1917, it immediately predates the composer’s only other ballet, The Miraculous Mandarin. With a light and whimsical scenario instead of its successor’s brutally violent one, it serves music that feels like the Mandarin with the rough edges filed down. It further resembles a paler version of Stravinsky’s The Rite of Spring, which was also written around the same time (and whose centenary of the first performance was also on Wednesday).

Taken on its own, The Wooden Prince has much to offer. It has intense action sequences and interesting sonorities. It is, for instance, the only music I can recall seeing with a four-hand celesta part. To appreciate it on its own merits, however, would require ignoring thoughts of its contemporaries in composition, and some other things as well. The opening is so obviously a copy of the prelude to Wagner’s Das Rheingold that it’s embarrassing to have to point it out. Other sections are equally obviously deeply indebted to Ravel’s impressionistic shimmering, and there’s also much that sounds like a dim echo of Prokofiev’s Cinderella, even though that wouldn’t be written for another 25 years.

Nor did it help that the Bartók had to follow the Kodály, which it also resembles while being less concise, less tuneful, and less witty. A reverse ordering would have done Bartók a lot of good, and it might not have hurt Kodály, either.