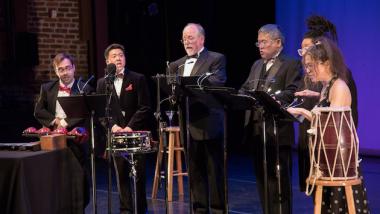 As a child, I had an irrational fear that everyone around me would suddenly begin speaking another language that I wouldn’t be able to comprehend. On Wednesday night at ODC Theater, my Tower-of-Babel phobia became a terrifying reality as vocalists gibbered and jabbered onstage in imaginary tongues as part of Other Minds’ 23rd-annual festival of new music.

This year’s program, titled “Sound Poetry: The Wages of Syntax,” explores musical works that occupy the no-man’s-land between speech and song — chanted declamations with nonsensical grammar, strings of meaningless phonemes recited with raplike precision, and compositions consisting of bestial howls that unsettlingly betray our species’ simian origins. Wednesday’s concert featured experimental pieces from the early 20th century, providing a historical context for the contemporary sound poems that were performed over the week-long festival.

At the forefront of this eccentric genre was German artist Kurt Schwitters. In the 1910s, he began producing dadaist collages from newspaper clippings, bus tickets, and other ephemera — a style he termed Merz. His 1932 Ursonate (Pre-sonata) is a kind of aural equivalent of these works; syllables are assembled like scraps of paper into ridiculous, unpronounceable “words,” such as “fümmsböwö” or “rinnzekete.” Schwitters was not concerned with the semantic side of language, but with its percussive possibilities — in his own recording of the piece, he rattles off the rigmarole with an erratic rhythm that recalls some sputtering machine.

While Schwitters’s recording remains the standard, various vocalists have tried their hand at the virtuosic glossolalia. Few rival the legendary interpretation of Dutch composer Jaap Blonk (who performed his own sound poems on Other Minds’ Saturday program). I found myself utterly transfixed as this lanky man with John Lennon glasses and Andy Warhol hair navigated the bizarre landscape of Ursonate. There was a certain schizophrenic character to Blonk’s performance as he shifted suddenly from one affect to another — gentle coos of “kwii Ee” gave way to motorcycle-like growling, rabid barking, flutey falsetto tones, and creaking vocal fry. Little of it could be termed “singing,” but Blonk displayed the vocal control of a seasoned opera soloist.

There was an absurdist theatricality to the whole ordeal. Blonk’s gestures and facial expressions ran the gamut of human emotion, instilling this babble with meaning beyond its pure sonic qualities. At one point, he addressed the audience directly with a cool matter-of-factness, as if he were giving a TED Talk. But his inability to convey a message elicited an unbearable frustration — he phrased one incomprehensible line like a question, shrugging his shoulders when he received no answer from the spectators. This built up to a series of primordial screams, his eyes screwed up, teeth bared, and face a bright red. In the closing section, he repeatedly tried to recite the alphabet backwards, unable to pronounce the final (or rather, first) letter; leaning into the microphone, he mouthed “AH!” as if he were shouting, but no sound emerged.

Blonk’s epic rendition of the half-hour piece (from memory!) stood as a disturbing Beckettian representation of our inability to truly communicate with one another. It perfectly embodied my childhood fears of aphasia — fears which, in fact, aren’t so farfetched. People who suffer strokes or other brain trauma are sometimes left incapable of producing or processing speech; and immigrants, of course, often find that their mother tongue is useless in a new country. A few years after he composed Ursonate, Schwitters would experience this linguistic alienation himself as an exile in Norway and Britain when his radical works were placed on the Nazi’s list of Entartete Kunst (degenerate art).

Slightly earlier than Schwitters, avant-garde artists in Italy were developing their own strain of sound poetry intended for both the ears and eyes. The speech compositions of Filippo Tommaso Marinetti and Fortunato Depero took the form of complex typographical images, with text arranged into pictures or abstract designs. The sleek fonts and urban subject matter are typical of the Italian Futurist movement, which valued speed, technology, and progress. Unfortunately, their obsession with all things modern and mechanical made Fascism particularly attractive to the Futurists—Marinetti was one of the party’s first members and co-authored a Fascist Manifesto.

Nearly 70 years later, Enzo Minarelli published his own manifesto on “Polypoetry,” an electronically enhanced variety of sound poetry that is obviously inspired by the Futurists (but without the Fascist bent). Minarelli’s works were performed on Friday, but for Wednesday’s program, he read through poems by Marinetti and Depero. With the original texts projected behind him, it was fascinating to see how Minarelli treated aspects of the typography as interpretive directions for tempo, dynamics, and even pitch. He traced the arching “stanzas” of Marinetti’s Savoia (1917) with his voice, drifting higher or lower depending on which way the text twisted. In Depero’s Grattacieli (Skyscrapers, 1929), he sped through blocks of tiny print that traced the New York skyline, accenting the bold, vertically written phrases that hung as neon signs.

Much of Marinetti and Depero’s vocabulary consists of Schwitters-like scat syllables. They were especially fond of onomatopoeias that expressed momentum and dynamism — Minarelli reveled in the curved repetitions of “GRAN-GRAN” that stood for clacking train wheels in Depero’s Subway (1939). But unlike Ursonate, their sound poems also include stretches of coherent text. Unfortunately, no English translation was provided, so the poems remained entirely nonsense for much of the audience.

American singer/composer Cathy Berberian took Marinetti and Depero’s graphic scores to a humorous extreme with her 1966 Stripsody (a portmanteau of “strip” and “prosody”). The score is made up of little cartoon drawings and comic-book sound effects, like the explosive “BAM!” and “POW!” panels that accompany Batman’s punches.

Tenor Randall Wong’s channel-flipping execution came across as a more lighthearted version of Blonk’s Ursonate performance. Wong started to look like a cartoon character himself as he zipped his way through boings, crackles, grunts, oinks, stomps, and squeaks at a dizzying pace. In one passage, he realistically imitated a series of FM stations, “dialing” from a Verdi aria to a Beatles song to a weather report before switching the imaginary radio off. Sadly, Robert Zamarin’s amusing illustrations for Berberian’s score weren’t projected, but Wong gave some sense of the doodles on the page with his own colorful hand motions.

Following Stripsody, the tenor was joined by members of the Other Minds Ensemble to perform works by Jewish-German composer Ernst Toch, who, like Schwitters, was forced into exile after the Third Reich came to power. Though he would eventually become a Hollywood film composer, Toch briefly experimented with sound poetry in his pre-émigré years. “Geographical Fugue,” the final movement of his 1930 “speech chorus” Gesprochene Musik, has long been a favorite of community choirs; but the first two movements, “o-a” and “ta-tam” were only recently reconstructed by choreographer Christopher Caines.

Other Minds presented the American premiere of the complete three movements. The six vocalists had fun with the interlocking playground rhythms of “o-a” and “ta-tam,” which sounded like charming nursery-rhyme refrains. I especially loved the adorable little iterations of “tiddle-liddy, tiddle-liddy” from Amy X Neuburg and Pamela Z (both of whom have premieres in this year’s festival). The work was, of course, entirely spoken; however, I found myself hearing waltz, polka, and march melodies that weren’t there in a strange auditory gestalt illusion.

For the sake of authenticity, Other Minds Ensemble performed the “Geographical Fugue” in its original German, though this probably wasn’t the best choice. The work really is a full-fledged fugue, just without any pitch material—there’s an exposition, episodes, a stretto, and a sharply defined fugal subject (“Trinidad! And the big Mississippi and the town Honolulu and the Lake Titicaca”). The dense, four-voice counterpoint demands precise articulation of Toch’s atlas-like list of place names, which are often recited in rapid-fire, 16th-note triplets. The ensemble stumbled over the less-familiar German text, resulting in muddy polyphony and sections that didn’t feel in sync. The splendid English translation by John Cage and Henry Cowell would have made it easier to achieve the proto-hip-hop crispness of Toch’s “beats” (the composer’s grandson, former New Yorker writer Lawrence Weschler, recalled a conversation with Nicholas Slonimsky in which the conductor told him, “You know, your grandfather invented rap music”).

The concert closed with a more successful performance of Virgil Thomson’s Capital Capitals (1917–1927) from Other Minds Ensemble’s four male vocalists, joined by pianist Sarah Cahill. It was the only number on the program with specifically notated pitches, though the singers mostly sat on single reciting tones as Cahill played sparse, ascending and descending scales. Their liturgical delivery contrasted comically with Gertrude Stein’s whimsical texts; though her libretto is in English, its jumbled syntax and insistent repetition read like an online machine translation gone hilariously wrong.

The four men resembled a quartet of dignified politicians engaging in respectful debate. But what they were discussing wasn’t exactly clear — Stein’s surrealist, stream-of-consciousness dialogue is a series of ramblings that riff on the multiple meanings of the word “capital” (i.e. government seat, first-rate, upper-case letter, etc.). Baritone Joel Chapman and bass Sidney Chen struck a brilliant rapport, taking on contrasting personas: the former as an enthusiastic go-getter and the latter as the level-head voice of reason (though little of Stein’s text can be dubbed “reasonable.”) Chapman admirably maneuvered Stein’s endless, illogical statements at breakneck speeds without tripping up. After a particularly wordy tongue twister, he landed on the final cadence with a triumphant, Broadway-style belt. Tenor Kevin Baum should also be commended for braving the uncomfortably high tessitura Thomson wrote for the tenor part; his top notes had a gentle, floating quality in the self-contradicting arietta “Cannot express can express tenderness.”

While I appreciated hearing these rarely performed gems of early modernism, the evening’s Wagnerian length left me exhausted. Two-and-three-quarters hours is much too long for a mid-week concert. The endless onstage announcements and anecdotes would have worked better as program notes or preshow lectures. And the organizers might have prioritized the live performances and cut the two prerecorded works (Bernard Heidsieck’s 1970 tape piece La poinçonneuse and a clip of Stein reciting her 1934 poem “If I told him”). These sound poems are fascinating, but too much jabberwocky can drive you mad; by the end of the grueling event, I was convinced I really had succumbed to aphasia.

Exploring Depths in Other Minds

Recorder players and a bansuri flute virtuoso get their place in the sun at Other Minds. Here’s how the surprising, eclectic 18th Festival came together.