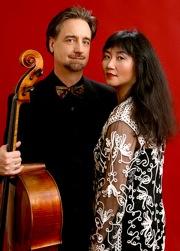 English Elusiveness and Steel at Menlo

After two centuries of an increasing reputation as a “Land Without Music,” whose homegrown composers weren’t considered worth importing by disapproving Germans, England suddenly flowered with a blossom of great composers starting around the turn of the 20th century. A garland of works by three of these masters formed “The English Voice,” the second of this year’s [email protected] chamber music festival main concert programs. I heard the last of three performances of this program, on Tuesday at St. Mark’s Church in Palo Alto.

The fun began, though, on Saturday at the Menlo School in Atherton. Professor R. Larry Todd of Duke University gave a thoughtful lecture on the search for English musical identity. Speaking so softly he was almost unintelligible even with a good microphone, Todd suggested that what rescued 19th-century English composers from greatness was an overly worshipful imitation of their German models. Edward Elgar, the first major composer in the modern English line, distinguished himself from his predessors by reimagining his German models, like Brahms, in an arresting and unworshipful way.

Before hearing the Elgar piano quintet on Tuesday, I calibrated my ears by taking a seat in the tiny Stent Family Hall on Saturday for a free "prelude" performance of the Brahms Piano Quintet by pianist David Fung and the Amphion String Quartet. It was a barn burner of a performance, pumped with steroids, and not subtle at all. Brahms' forthright and ordered music can take it, though, and the audience had a terrific time.

In the main concert on Tuesday, the Elgar Piano Quintet, Op. 84 (1919) showed its difference from Brahms and also in the style of the performers. Pianist Inon Barnatan took a gentle, almost soothing approach to the evasive, almost eerie, music. The Miró Quartet gave more bite to Elgar’s harmonically ambiguous figures. The effect still came across as ghostly and mysterious in the first movement introduction and its reprises, which seemed to me the most distinctive and effective part of the performance. The slow movement, centerpiece of the work, was presented with gracious élan. What could have been murky was clear and elegant. The entity revealed itself as a disturbing and provocative masterpiece, proof — as Professor Todd had said — that radical composition is not limited to the conventionally modernistic. This is one of those pieces that should be heard more often.

At just about the same time that the renowned and honored Elgar, then in his early sixties, was composing his quintet, an obscure, fledgling composer named William Walton, aged just 16, was beginning a piano quartet, which he completed a couple of years later. The generation gap between the two composers is wide. Cryptic as the Elgar quintet may be, Walton's is an even tougher nut to crack. I was glad I’d gone to the open rehearsal on Saturday afternoon, where the performers — Festival Codirectors Wu Han, piano, and David Finckel, cello, were joined by Ani Kavafian, violin, and Lily Francis, viola — worked on assigning leads, matching bowing patterns, and the tricky and unlikely entrances Walton specializes in.

While they learned to play this challenging piece, I learned to listen to it. Walton uses a full panoply of modernistic techniques — rhythmic irregularities and shifting tonality among them — and employs them in a restless, unsettled manner. True, there are touches of reference to Elgar in the music, and modal harmonies that give the slightest folk-music flavor here and there. During the rehearsal, Finckel even gallantly suggested that the work was as English as Stilton cheese or jugged hare. Nice try, though I don’t buy it: Whatever touches of pastoral style Walton may drop in, this is the voice of an Englishman who’s importing the latest continental European fashions.

With Kavafian and Francis slashing away at the fierce opening to the last movement, while Wu Han pounded out the heavy piano chords, this work could have been an assault on the senses. The players were careful, though, not to go overboard, and the softer moments — Finckel holding a drone, for instance, while Francis offered a gentle modal theme — gave some balance to this tough piece of music.

The remaining work on the program was by a yet younger composer, from a considerably later date. Benjamin Britten wrote his song cycle A Charm of Lullabies in 1947, just at the point he had reached his full maturity as a composer. Britten set five lullaby poems by as many authors. Though most of them are as gentle as could be expected, one, by Thomas Randolph, fiercely threatens the wakeful child, and could have been written today by the likes of Lemony Snicket.

Apart from the Randolph poem, which gets jumpy, and long, unaccompanied vocal parts in the final song (words by John Philip), Britten juxtaposes soft, light piano accompaniment — finely rendered by Inon Barnatan — with an equally lyrical vocal line. Soprano Sasha Cooke sang in a sumptuously matronly style, full of power and grace, the embodiment of a watchful nanny. She brought great expressiveness and consideration of the text to her excellent singing.

What makes this charming and unpretentious cycle as disturbing and unsettling as the other works on the program is the way Britten sets the otherwise simple piano and voice parts at cross-purposes to each other, forcing them to clash harmonically. Cooke and Barnatan never let this prevent them from achieving sublime cooperation, letting the clashes be merely a hidden undercurrent.

The free prelude concert on Tuesday featured two of the darkest and most disturbing works for piano and strings in the repertoire, Brahms’ Piano Quartet in C Minor, Op. 60, and Shostakovich’s Piano Quintet in G Minor, Op. 57. In each case the pianist — Michael Brown and Roman Rabinovich, respectively — took that darkness to heart, while the string players offered lighter, almost lyrical interpretations. Timothy Braun, violin; Molly Carr, viola; and Gabriel Cabezas, cello; in the Brahms made careful coordination of their playing into an art in itself. The quartet in the Shostakovich of Hye-Jin Kim and Michelle Ross, volins; Mario Gotoh, viola; and Alice Yoo, cello; interwove their playing to startling effect. As usual at Menlo, this prelude concert was as interesting as the main program that followed.