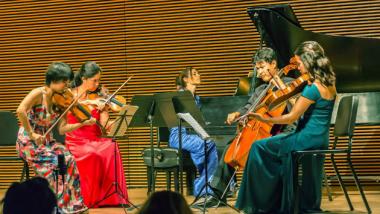 It’s gratifying when a cultural organization acknowledges and promotes classical music through concerts, and it's even better if it engages top-notch performers. The Alliance Française Silicon Valley, fulfilling its mission of promoting French culture locally, thankfully graced its second annual Festival of French Classical Music, co-directed by conductor Mark Starr and flutist Isabelle Chapuis, with the highly esteemed Ensemble San Francisco for a recital in the Finn Center’s Tateuchi Hall in Mountain View on Friday.

The program was billed as “Three Summits of French Chamber Music,” by César Franck (of Belgian origin, settled in Paris), Maurice Ravel, and Claude Debussy.

The concert began vividly with cellist Jonah Kim and pianist Christine McLeavey Payne in Debussy’s Sonata No. 1 in D Minor. This was an excellent performance, the best I’ve heard of this piece. It was a hard-edged rendition, communicating with pointed clarity. Kim expressed himself through graded levels of passion and in wide varieties of tone, from hard and metallic to gentle recitative. He took great joy in bending notes in the pizzicato sections of the “Sérénade” movement. Payne played crisply and vigorously in accompaniment.

Ravel’s Trio for piano and strings received altogether a more conventionally Impressionist performance. Kim played in a more even, controlled style with little open display. Payne’s piano was softer and gentler. Violinist Rebecca Jackson, who joined them, was the player with the pointed clarity in this work. Her long trills in the finale were firm and absolutely precise.

The work didn’t entirely melt away in soft fuzziness. The players brought the volume and the energy up for logically-placed climaxes, which this piece doesn’t always get. There was enough toughness here to avoid the coy or twee.

For Franck’s Quintet for piano and strings, the three were joined by violinist Livia Sohn and violist Jessica Chang. Again, it was one of the newcomers, Chang on viola, who gave the most conspicuously vivid playing. Though the Franck [quintet] can be powerfully energetic, this performance was more in the mode of the Ravel, gentle and relaxed.

Though the Franck can be powerfully energetic, this performance was more in the mode of the Ravel, gentle and relaxed. Little dramatic or abrupt disturbed these complex and substantive harmonies. Especially in the first movement, the interplay among the instruments gave off a sense of two separate works being played simultaneously, a piano solo over here and a string quartet over there.

Though I count the Debussy as the highlight of the evening, all the works were well-played performances of great French chamber music.

Tateuchi Hall’s bright, uplifting acoustics contributed to the clarity of the performances. The only hitch was the air conditioning, which was set to be cold and felt colder after intermission. It seemed to be setting an air flow across the stage, which kept flipping pages on Payne’s score. Her page turner spent more time acting as her page unturner. This was distracting, apparently more for the audience than for Payne, who kept playing unfazed.

The audience was few in number: Tateuchi is a small auditorium, which could still have held many more than it did. The second concert, this Saturday at 8 p.m., boasts a temptingly varied program, with chamber works by Ravel, Poulenc, Varèse, and Messiaen, plus vocal excerpts from Bizet’s Carmen, by performers including flutist Isabelle Chapuis and pianist Gwendolyn Mok.