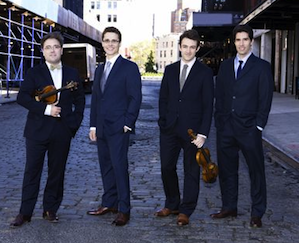 For the third time this season, the San Jose Chamber Music Society faced a medical crisis in its scheduled performing ensemble. And for the third time, the intrepid management arranged for a more than satisfactory solution. The members of the Escher Quartet had about a month to prepare to substitute for the Auryn Quartet in a two-program, all-Beethoven festival at Le Petit Trianon on Friday and Saturday. They swapped out a couple of pieces for ones they’d played more recently, and they put on a well-rehearsed and convincing show on Friday. I was unable to attend Saturday’s concert, after which the young and vigorous musicians were scheduled immediately to jet back home to New York on the red-eye to be ready for gigs there on Sunday afternoon.

At the postconcert conversation on Friday, the Escher’s new second violinist, Aaron Boyd, spoke of his admiration for the Guarneri Quartet, and of how much he had learned from playing chamber music at the Music at Marlboro festival with their cellist, the late David Soyer. First violinist Adam Barnett-Hart and violist Pierre Lapointe, the remaining founding members of the Escher group, stared at him in amazement. Soyer had been their first coach. Maybe, they suggested, this newly realized shared heritage is why Boyd fit so well into the ensemble.

Certainly Dane Johansen, the Escher cellist, snuggles in the same groove. His playing has the deep bass assertiveness that Soyer’s was known for. Johansen is so rocklike and secure in his deeper register that he sounds relatively strained and awkward at the high end, something that Beethoven calls for frequently in his Quartet in A Minor, Op. 132, which concluded this concert.

Rich, organlike sonority from the four sounding together … gave great intensity to much of the evening’s music.

Barnett-Hart, by contrast, soars like a hawk to the highest peak, playing with piercing intensity the notes that poor, deaf Beethoven would have been least likely to be able to hear. He sets an impression of shrillness, constantly surprising the listener by sounding actually less shrill than he seemed to be playing earlier. Boyd’s tone is far softer and more gentle; he is the most graceful performer in the quartet. Lapointe sits off to the side, and plays appropriately, with a varying, often gruff tone that sticks out.

The Escher Quartet’s resemblance to the Guarneri Quartet is perceptible in its general approach and style. These players perform with the sort of stiff grandeur that I associate with the older group. This is often a highly admirable thing. Rich, organlike sonority from the four sounding together, accompanied by powerful tension in crescendos and at other critical spots in the structure, gave great intensity to much of the evening’s music, in particular the first movement of the Quartet in E Minor, Op. 59, No. 2, which opened the concert. Fast exchanges of brief phrases in its finale, more fiery than in good humor, were lightning-quick and elegantly presented. What were too often missing were the melting beauty in Beethoven’s melodies and the eager bounce in his lighter fast music. The Escher Quartet spoke these parts fluently enough, just usually not as if it were a native tongue. It could only be called disappointing in contrast with the brilliance elsewhere.

The finale redeemed much. It was spoken quickly, with eloquent facility.

The grace and lyricism that seemed to be missing from the slow movement of Op. 59, No. 2, were found in the gentle opening movement of the third work on the program, the Quartet in D Major, Op. 18, No. 3. If only the Op. 59, No. 2, slow movement could have been played with such a winning mixture of heat and lyricism as was heard in Op. 18, No. 3! In this quartet, too, the slow movement was the least convincing part. Marked Andante con moto, and thus not very slow, it needs rhythmic flexibility. Again, the finale redeemed much. It was spoken quickly, with eloquent facility.

Any qualms were forgiven, however, after the Escher came to the central slow movement of Op. 132. This epically long “Convalescent’s Holy Song of Thanksgiving,” as the composer labeled it, interleaves long sequences of slow, hymnlike chords with two lighter episodes expressing cautious cheer at his return to health. If this was not quite the slowest possible performance of the hymn, it was entirely slow enough. Strong, wide voicing in the ensemble and profoundly deep notes on the cello kept it riveting. If Beethoven did not bound out of bed and dance in the intermediate episodes, never did he sound physically healthier than in this performance.

After that, Op. 132 wraps up quickly and, in this performance, most satisfactorily. A brief march was gratifyingly bouncy, the transition to the finale darker and full of expectation, and the finale insistently pulling forward, with the grace of the best performances.