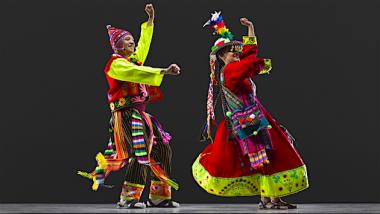 The Ethnic Dance Festival’s 40th anniversary season got underway at the War Memorial Opera House over the weekend, with the first of two programs that again showed the rich diversity of the Bay Area as well as the love and care lavished on the dance, the music and everything else that makes this remarkable gathering unmissable, year after year. Just as there is a seemingly inexhaustible supply of dance and music in the Bay Area, there are also common themes bringing ancient beliefs, hopes and traditions to the fore. Program One, with performances from 11 locales, frequently included circle dances, spinning dances, references to the ancestors, to orbital paths, planets, and animals. And then there are the common themes of departed spirits, love and war, kidnaping — wherever you go, there you are.

Program One began in ceremonial fashion, with a compellingly rhythmic, beautifully staged invocation by the Nunamia Yup’ik Eskimo Singers and Dancers. The group’s sole Bay Area resident is its founder and director Chuna McIntyre. He was honored with the festival’s Malonga Casquelourd Lifetime Achievement Award for Excellence in World Dance. The other three dancers live in Alaska. (There are also two drummers.) For The Shimmering Moon, the dancers arrive in heavy animal-pelt jackets — temperatures can reach 60 degrees below zero at home — which are doffed to reveal dressier white clothing, a tribute to the full moon that lights the arctic, and the goddess in the moon. This is a seated, eloquently gestural dance, where the hands, covered in white feathers, lead the torsos swaying in rhythm to hypnotic songs in praise of the moon.

Josephine Aloralrea, an Ursuline sister, wears a headdress of small white snowballs, gleaming like stars on a series of concentric planetary circles, inviting all to be “unafraid” to come into heaven’s light. She also wears a cruciform representation of all animals, “our earthly allies.” The ancestors are here too, as “celestial allies.”

As the three leave the stage, McIntyre, last to exit, walks in rhythm to his chant, even taking a moment to grin at the audience and wiggle his hips. Part Yup’ik, part YouTube.

Chitresh Das, a force to be reckoned with in Bay Area Indian dance, brought its junior company this year for Sare Nau, a world premiere of North Indian kathak dance to a speedy nine-and-a-half beat, or taal, generally used for drumming drills rather than dance. This is played on tabla and western drum kit and consists of blazing-fast, impeccably unified chakkara spinning and circling dances, accompanied by jati, the beat of the 15 dancers’ bare feet. It’s a playful conversation between the divine Krishna and the devotee Radha. The red and gold costumes are as stunning as the dancing; silk circle skirts, with tight trousers beneath. The choreographer is Charlotte Moraga, a disciple of Chitresh Das, who died in 2015; the musician and composer is his brother Ritesh Das.

Agua Clara Flamenco contributed a charming series of lightly airy dances from Seville, Aire de Romero, including virtuosic encounters with fans and a swirling shawl, expertly wielded by an expressive troupe of eight dancers in ruffled flamenco dresses, accompanied by song and palmas, or clapping, by a trio of two singers and a guitarist. Artistic director Clara Rodriguez choreographed for the Oakland-based troupe, founded in 2011.

A huge yellow lion materialized in the balcony, flapping its eyelashes, making its way to the stage, and capering about, thanks to the puppeteers of Leung’s White Crane Lion & Dragon Dance Association. The dance is 1500 years old, brought to China by travelers on the Silk Road. The three Leung Brothers — Kuen, Kwan, and Allen — brought it here in 1970. It’s followed by a spectacular “Celestial Dragon” dance, in which a 160-foot long white and day-glo dragon puppet, revealed in black light and supported by nearly unseen puppeteers in black shrouds with sticks, circles the stage, rising and falling, parting and rejoining, to electronic music. The presentation was a tribute to the dragon’s deviser, Ann Woo, who died in 2017, the founder and artistic director of the Chinese Performing Arts of America.

The Chinese Soul, a solo dance by Ye Feng, leader of her eponymous dance company, was an unusual entry. Feng collaged it together with multiple references to Chinese culture, traditional music from 400 B.C., martial arts, and modern dance, and for all its grace and innovation, it seemed out of place in this showcase for more traditionally-based dances.

The all-woman Arenas Dance Company’s Afro-Cuban dance — big-hearted, confident, and soulful — was a delight. Manos de Mujeres a la Obra (Women’s Hands at Work) ranged from the rhythms of Santeria, the Cuban religion based on traditional Yoruba worship practiced by enslaved West Africans, to the sultry yambú, a rumba also from African and Spanish musical genres, which developed in the late 1800s. Women, strong and worldly wise, are depicted dancing with brooms and singing proudly of their womanly power, even in housework. Women are the choristers, too, and stunningly, the drummers. As choreographed by artistic director Susana Arenas Pedroso, it’s a lively combination.

Parangal Dance Company’s dance was based on a legendary 14th-century poem from the agrarian Maranao people of Mindanao, the Philippines. Part of oral tradition and originally in Sanskrit, it translates to “The Abduction of Princess Lawanen.” This huge group of dancers and musicians on native instruments formed stunning vignettes thanks to a wealth of brilliantly colored silk and satin costuming, umbrellas, and décor.

The men have an affinity for jumping up onto each others’ shoulders or being borne perilously on twin poles; the women sway with fans and unswayable vivacity. Processions abound. The action, in four quick scenes: The princess is carried away from her brave and true prince. There’s a war for her return until the queen sings a plea for peace, saying the opposing sides are brothers. The princess is returned and there is rejoicing in the land, including singkil dancing, the feet dodging intersecting bamboo poles.

Can you tap dance in sandals? The women of Bolivia Corazón de América can and do in the course of Pachamama, three dances from Andes communities by artistic director Isidro Fajardo honoring Mother Earth, who encompasses all life. The women step heartily on her in the Zapateo Potosino. The men do their heavy stepping, even stomping, in platform shoes during a warrior dance, Pujillay. There’s a dance based on farming, filled with partnered speedy turns and stomping. The dancers are garbed in silver threads, headdresses of wool and feathers, and lovely embroidered fabric. There’s a lot to wear, a lot of gestures and patterns to coordinate, and the dancers are steadily, smilingly spot-on.

The southeast coast of Mexico, ancient Olmec homeland now the state of Tabasco, is the source of Ensambles Ballet Folklorico de San Francisco, which brought a premiere of a suite, Tambores de la Chontalpa, four regional dances of richly Mayan heritage, emphasizing the speedy, challenging footwork of zapateo, danced in hard shoes for rewarding sounds and maximal vitality. The suite paid tribute to the harvest and depicted the fiesta that follows. The dancing is laced with historical references to gods, wars, and conquests, as well as the Spanish colonial era.

The chiropractic student to my left was practically salivating as she watched the dancers, especially the men, on legs continually flexing at the knee, seemingly forever. There were significant parallels between the footwork here and Irish step dancing. The music came from ceramic whistles (Chontals) and reed flutes (carrizos) as well as drums, or tambors. The men, in blue shirts, white pants, and red kerchiefs, whirled their straw sombreros into the air, and the women, in embroidered white shirts and twirling red skirts with gorgeous floral headdresses danced flawlessly in red high heels.

A stunning Tahitian dance troupe, Te Pura O Te Rahura’a, 56 strong, offered an elaborate tale of sorcery and transformation, not dissimilar to the plot of Swan Lake. In the contemporary O Mo’emoe’e (Curiosity), created by Adrian DeCastro, Marilou Ubaldo Lafon, and Shanna Pineda, women in thrall to an evil sorcerer, become birds by day, forbidden to touch humans. When they do, they become beasts. The prince Onoono who has fallen in love with one of the gorgeous birds, Maruono, seeks her out among the flock (see Swan Lake, Act II or IV), but she lunges at him, either a sorry ending where they are forever apart, or the launching of an apotheosis, where the lovers live in a banyan tree in eternal embrace, as in some versions of Swan Lake.

The stunning and traditional hip-shaking women undergo an amazing transformation into horned, crouching monsters in black. It’s a relief when they return to their gloriously colorful costumes and that amazing, gestural, hip-shaking state, embodying a sorcery all its own. It’s of a piece with the Ethnic Dance Festival’s annual magic. Next weekend, it’s a whole new show. You’d be lucky to see it.