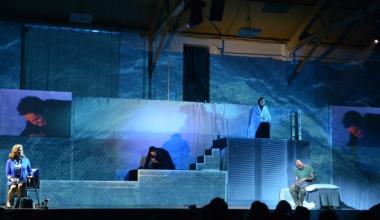 Fallujah the Opera Viscerally Exposes the Casualties of War

Long Beach Opera has never been afraid to tackle controversial subjects. Fallujah, a world premiere production, which opened Friday at the Army National Guard armory in Long Beach, is inspired by the real-life combat experiences, PTSD suffering, and multiple suicide attempts of Marine Gunnery Sergeant, Christian Ellis, who fought in the bloodiest conflict of the Iraq war, the second battle of Fallujah, in 2004. With its powerful libretto by Iraqi-American playwright Heather Raffo, and propulsive multi-dimensional score by Canadian composer, Tobin Stokes, Fallujah is a shock-and-awe experience that opens eyes and rend hearts.

The initial stimulus for the project grew out of a therapeutic retreat for vets organized by Explore.org, a division of the Los Angeles-based Annenberg Foundation. It was at this Idaho fly fishing retreat that philanthropist Charles Annenberg met Christian Ellis. Annenberg was impressed and deeply moved by the fact that the former Marine had been trained as a classical singer before joining the military and encouraged him to write an initial treatment for an opera based on his experiences.

City Opera, Vancouver and its conductor/ artistic director, Charles Barber then decided to produce a workshop of the unwritten opera. Stokes and Raffo were selected to create the score and libretto. Each consulted with Ellis. And each came away from the encounter with insights that add depth and dimension to the work. The result, so ably demonstrated by LBO, is an opera set amid the chaos and violence or war, that is as much about healing as it is about loss— for Americans and Iraqis.

LaMarcus Miller, a resounding young baritone whose voice can hit like a howitzer, plays Philip, a USMC Lance Corporal who is confined at a medical facility on 72-hour watch following a second suicide attempt. His adopted mother, Colleen, played with devastating intensity by Suzan Hanson, has come to be with him. But Phillip, literally and metaphorically, is incapable of unlocking the door to let her in.

He is not, however, entirely alone. In addition to a well-meaning orderly (Arnold Livingston Geis) who tries to give him solace, Philip is visited by a succession of ghosts from the past. Again and again his memories return to two horrific incidents. One involves the death of his best friend and platoon brother, Lance Corporal Taylor (Todd Strange) who Philip literally sees blown away. The other revolves around a confrontation with a young Iraqi boy, Wissam, sensitively played by Jonathan Lacayo, and his radicalized mother, Shatha, sung powerfully by Ani Maldjian. It’s a confrontation that initially suggests the possibility of building a bridge between combatants, but ultimately ends in tragedy.

Long Beach Opera excels in making the opera fit the clime. And the decision to place the action of “Fallujah” on a raised stage inside an Army National Guard Armory makes a powerful statement. The action is bathed in projections, which include photographs taken by Marines in Fallujah and nightmarish artwork created specifically for the production by a pair of PTSD-suffering Iraq war vets, Jon Harguindeguy and Michael Hebert.

Musically, Stokes’ score is a powerful, exceedingly listenable mélange of orchestral atmospheres, which ebb and flow in a manner that reflects the chaotic, battle-torn state of Philip’s mind. Combat sections are driving by rhythmic intensity, accentuated by a small rock ensemble reflecting the type of thrash metal music that was favored by many of the soldiers in Iraq. These moments of crisis, chaos, and confrontation are balanced against interludes of calm and reflection with a hint of Middle Eastern musical influence. There are introspective arias and ensembles, including a climactic quartet sung by the two mothers and their sons.

The brilliantly executed set design and projections were the creation of Andreas Mitisek, Long Beach Opera’s artistic director, lighting designer Dan Weingarten, and video artist Hana S. Kim. The opera also opened with a series of interviews, which serve as an overture. The 11-piece orchestra (which was set off to one side) was skillfully and propulsively conducted by Ktistof Van Grysperre.

Every performance of Fallujah is followed by a Q&A exchange with the cast. And while the best way to experience the visceral power of the opera is to experience it live, there is an alternative. Friday (March 18), Fallujah will be televised live on KCET, Link TV, DirectTV channel 375, and DISH Network channel 9410.