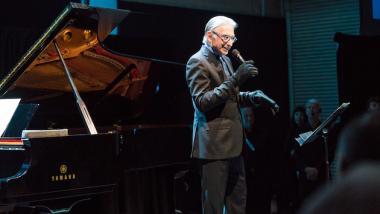 Three years ago this month, the San Francisco Symphony debuted its immersive performance space and intermittent concert series SoundBox. Of all the delights this repurposed rehearsal hall and purpose-driven programming has delivered, from new audiences to a vital new way of hearing and “seeing” music — wall and ceiling projections are an integral component of the experience — perhaps the most striking one is how fresh it still feels.

I attended Friday’s “Connections” program with a SoundBox newcomer. By the first of two intermissions we were both grinning at each other as if we’d discovered a secret portal at the back of Davies Hall into an unexpected and artfully arranged cabinet of curiosities. By evening’s end we’d sampled everything from an eerily reverberant Dutilleux cello solo (performed with haunting focus by Oliver Herbert) to the infectious schmaltz-fest Sketches from Kazakhstan, to a virtuostic and chaotic father-son duet for amplified bassoon (San Francisco Symphony principal Stephen Paulson) and electric guitar (Greg Paulson, of the death metal band Arkaik).

Family ties were the running theme of the concert, with music director Michael Tilson Thomas as the genial host and occasional keyboard performer. S. F. Symphony principal flutist Tim Day was accompanied by his son, pianist Britton Day, in a pair of caressingly lovely miniatures, by Fauré and Ibert, as part of the all-French opening panel of the evening. Mother-daughter violinists Chunming Mo and Alina Ming Kobialka performed an equally touching pair of short works by Shostakovich (a heartbreaking Präeludium from the 1955 Five Pieces for Two Violins and Piano and Ligeti (the glassily fragile Ballad and Dance of 1950).

Michael Tilson Thomas, who made the point several times that musical families aren’t only genetic ones, teamed up with Britton Day on a propulsive and wittily deployed account of Poulenc’s Sonata for Piano Four Hands. Making music together forged the connections at the heart of this SoundBox edition.

The middle section of the program was devoted to the four atmospheric Sketches, a tribute piece that was a labor of love by S.F. Symphony violinist Raushan Akhmedyarova for her father, a skilled player of the dombra, a plucked two-stringed Kazakh instrument. Composer Sam Post, who was in the hall Friday, was commissioned to write a string quartet based on Karshyga Akhmedyarov’s whirling folk tunes. It was subsequently reworked for the chamber orchestra that carried it off in lively fashion here. A mini video-documentary of the father performing and his daughter wandering the hillsides of her native country added a special piquancy. Never mind that the music, which brought Rimsky-Korsakov to mind, was more about atmosphere and accelerating tempos than anything more sustaining. The link across the generations came through eloquently.

The final portion of the evening was the weakest. An ill-considered and not particularly well-performed Scherzo from Schubert’s great String Quintet D. 956 felt like a decontextualized outlier. So, even though it was liquidly performed (to an overbearing projection of falling and pooling water), was Paulson’s bassoonized Prelude from Bach’s Cello Suite No. 2.  That noisy conversation with his son’s electric guitar may have suited others’ tastes more than mine as an evening ender.

With the intentionally eclectic selections, the SoundBox curators almost invite listeners to care more for some things than others. The brevity of the pieces, which had running times of two minutes to 19, with most tending toward the shorter end, is a key component. Strikingly, the format seems to concentrate listening rather than divide or divert it. Even though the audience is scattered about on bar stools, banquets, and ottomans, many with drinks and cell-phone video cams in hand, SoundBoxers are clearly focused on the music. They listen. They react. They’re ready to devote their attention to whatever’s next.

The Meyer Sound Constellation system, which has been a key SoundBox player from the start, makes no small contribution to that music-audience dynamic. Without it, the acoustics would never work in the cavernous industrial space. With the Constellation, which can control and alter the sonic environment in countless ways, the listening experience is heightened and enhanced. That may be the most important connection of all.

Despite wrinkles in the format, the Symphony's hip new series continues to impress.