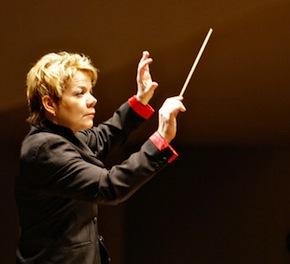 Fast and Furious at 50: Cabrillo Festival

At the beginning of Saturday night’s concert at the Cabrillo Festival of New Music, in the Santa Cruz Civic Auditorium, several members of the Festival Orchestra’s cello section came out wearing party hats and carrying balloons and a banner reading “Happy 50th Birthday,” in honor of the 50th season. Music Director Marin Alsop happily accepted the congratulations, noting with some astonishment that she’d been with the festival for 21 of those years.

Then she told that audience that, as is her privilege, she was reversing the halves of the program. By the end of the concert, which was entertaining, but not particularly deep, it was clear that she’d made the right decision, which put the stronger works on the second half of the program.

The concert opened with Dylan Mattingly’s I Was a Stranger, commissioned for the festival by John Adams and Deborah O’Grady. Mattingly, age just 21 and a Berkeley native, now studies at Bard College, where his teachers include George Tsontakis, Joan Tower, and Kyle Gann. He has composed an impressive number of works, starting when he was a child. The program notes refer to Mattingly as an emerging composer, and that’s a fair description. He has ideas and reasonable command of the orchestra, but in I Was a Stranger his own voice hasn’t quite emerged.

The composer himself appears aware of this: In a short spoken introduction, he termed his piece “an inhale … about becoming” and about possibility. The exhale might include some tightening up of the work, which has an awful lot of postminimalist arpeggiation, much too much stopping and restarting, and not quite enough ideas to maintain interest or momentum over the length of the work. Some dissonances in the high winds and brass emerge from the orchestral texture for no apparent reason, a Rossini-like crescendo toward the end isn’t well-prepared, and the chiming mallet instruments at the close are right out of the end of Stravinsky’s Les Noces.

Mattingly has ideas and reasonable command of the orchestra, but in I Was a Stranger his own voice hasn’t quite emerged.

Lou Harrison’s Third Symphony, also a Cabrillo commission, dates from 1982, with revisions in 1983 and 1989. It might be called a symphony, though the movement titles, the listener’s ear, and Harrison’s own notes make it perfectly clear that the Third is more a dance suite than a symphony.

Each of the six movements has its charms, but there’s not much by way of development or the kind of complex structure typical of symphonies. Instead, we get big, modal tunes — you would think you were in Vaughan Williams or Hovhaness territory if you didn’t know who the composer was — and updated Baroque, and even medieval dance forms. It’s all very pretty, yet at perhaps more length than the material can sustain.

First up on the second half of the program was the shortest, and far and away the most successful, piece on the evening’s program, Andrew Norman’s witty and supercharged Gran Turismo. Written for a most unusual ensemble of eight violins, inspired by both an auto racing video game and Baroque string music, Gran Turismo is tremendous fun to hear and to watch. Norman bounces his material around the equal-voiced ensemble with enormous virtuosity, constantly varying the texture with various string techniques and groupings within the ensemble. Most of Gran Turismo is in a kinetic moto perpetuo style, but Norman cannily intersperses lyrical interludes, providing balance, variety, and some repose. It’s a terrific piece, and was brilliantly performed by eight unnamed violinists from the Festival Orchestra.

What to say about Osvaldo Golijov? His 2007 work Rose of the Winds, for orchestra plus Galician bagpipes, kamancheh (a small, bowed string instrument from Persia), clarinet, and “hyper-accordion,” exemplifies all that’s good and bad about this enormously gifted composer. It’s multicultural, incorporating music (or musical styles) from several world cultures. It’s handsomely orchestrated and includes unusual instruments. Parts are danceable, parts are hummable. And two movements of this four-movement piece are based on an older Golijov work, Ayre. This is notable because of Golijov’s well-publicized pattern of reusing music by himself and others (with permission) in commissioned works.

Andrew Norman’s Gran Turismo is tremendous fun to hear and to watch.

The faster-moving first and third movements came off the best, dominated by raucously joyful and intense leads in the bagpipe and clarinet, which often dueled with each other across the stage. Spanish bagpiper Cristina Pato whooped and grinned and danced around with her gaudy black and gold pipes, obviously having a great time; David Krakauer met her note for note in klezmerlike clarinet and alto clarinet solos. The third movement, “Tancas Serradas a Muru” (Walls are encircling the land), sounded more like Scottish war music than anything, and was played as an encore.

The slower, dirgelike, second and fourth movements came off rather worse, sounding more like a series of effects than coherent movements. I sometimes thought that the new-age Irish songwriter Enya was about to float on stage. The close of the piece, with members of the brass section picking up shofars (ram’s-horn instruments used in some Jewish services), registered as laughable kitsch.