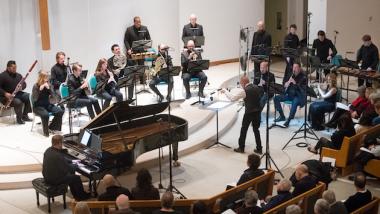 If you went into an art museum and saw a wispy Watteau hanging next to a splashy Jackson Pollack, next to a shadowy Rembrandt, you’d find the juxtaposition jarring. But when it comes to programming classical music concerts this kind of nonsensical mix-and-match is the norm.

To actually curate a concert is an art. It is one of the qualities that sets apart the Los Angeles music series Jacaranda. For15 years, under the leadership of Artistic Director Patrick Scott and Music Director Mark Alan Hilt, Jacaranda’s concerts have been conceived as musical journeys of discovery, featuring the highest standards of musical performance accompanied by Scott’s encyclopedic program essays that hark back to the golden age of liner notes. The range of musical inclusion is wide ranging. But the emphasis is placed on music of the second half of the 20th century, with special attention paid to the music of Oliver Messiaen.

Saturday’s Jacaranda concert, “Extrasensory,” was a perfect example. Combining a variety of instrumental ensembles and vocalists, the concert traced a through-line from the impressionism of Claude Debussy to the birdsong-inspired creations of Messiaen; his close association with composer André Jolivet; the academic modernism of Betsy Jolas (who studied with Messiaen and his second wife, Yvonne Loriod); to the contemporary, Messiaen-influenced, composer, Eric Tanguy. It also delved into the color-sound brain condition known as synesthesia —chromesthesia (sound to color), which affected Messiaen, in particular.

The concert began with Jolivet’s 1944 firecracker of a composition, Chant de Linos (Lamentation song, for flute, harp, violin, viola and cello). The piece with its dynamic, high-flying writing for the flute became a stepping stone for the early career of Jean-Pierre Rampal. The work’s three sections abound in color-filled writing, with the flute performing high-flying acrobatics as part of the swirling dialogue. It was played with avid attacks and virtuoso fluency by flutist Rachel Beetz, accompanied by Alison Bjorkedal (harp), Alyssa Park (violin), Luke Mauer (viola) and Timothy Loo (cello).

The program then unfolded like a wrinkle in time, moving back and forth in contrasting eras connected by musical, historic, and interpersonal themes. The time leap from 1944 to Tanguy’s 1999 Sonata for Two Violins felt connected and seamless. Its three sections are defined by metronome mark: Half Note = 104, Quarter Note = 72, and Quarter Note = 152. The performance by Park and Shalini Vijayan combined exactitude with flowing emotional coloration.

It all built up to the first act climax, a ceiling-raising, gong-peeling, pulsing rendition of Messiaen’s, Oiseaux exotiques (1956), the second of his five “bird concertos.” Like a modern Siegfried, these concertos represent the composer suddenly freed to enter the realm of birdsong. Of the five, Oiseaux Exotiques is the most concise, a brilliantly constructed example of the composer’s ornithologically inspired vocabulary.

The 18-member ensemble, conducted by Hilt, combined with the bright acoustic of the First Presbyterian Church in Santa Monica, proved dazzling. The instrumental colors, particularly from the piano, percussion, and multiple clarinets emerged as if the first birdcalls of dawn, then evolved into a full-blown dialog of mixed species with the gong providing supernova-scaled crescendos.

The mood of the second half was considerably more subdued. It began with an early melodic lament, Messiaen’s La Mort du Nombre (The death of number, for soprano, tenor, violin and piano) from 1928. Suzanne Waters and Timothy Gonzales were the featured, high-flying vocalists reflecting that we are “Lighter than feathered birds, lighter than emptiness. Lighter than nothingness, we will float above a dream.”

Quartet III: Nine Etudes (1973) by Betsy Jolas, performed by the Lyris Quartet, made sense thematically, since it illustrates Jolas’s connection to Messiaen and Loriod. But as a self-described “fellow traveler of Boulez,” the nine-section piece (each one designated by a string technique) was as dry an experience as crossing the Mojave Desert. During its performance the energy level in the hall dropped precipitously.

The mood was only partially recaptured by the concert-ending performance of a 1920 reduction of Debussy’s Prélude à l’apres-midi d’un faune (for 10 instruments) arranged by Arnold Schoenberg associate, Benno Sachs. At its best, the reduction points up colorful details, but it could never approximate the lushness of Debussy’s full orchestration.

In the four full pages of notes devoted to the music, Scott manages to connect the symbolist poet Stéphane Mallarmé with the young Debussy, the Dreyfus Affair, Monet’s paintings in Giverny, the Ballet Russe, the growing French infatuation with jazz, and Arnold Schoenberg’s Society for Private Musical Performances.  A woman behind me told her friend, “I always wait until I get home to read Patrick’s notes.”

Jacaranda’s next concert, devoted to music by Xenakis, Messiaen, and Jean Barraqué will take place March 17.

Decoda Enchants With Clarinet Quintets Between Courses at Town Hall

In martha & monica’s concert at Old First Church, contemporary composers held their own against heavy hitters from 100 and 200 years ago.