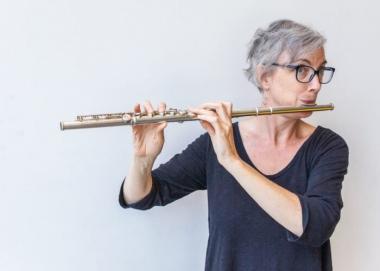 Since the pandemic began, Left Coast Chamber Ensemble has admirably led the way online. The group played its March 9 concert to an empty hall at the San Francisco Conservatory of Music, livestreaming the performance on YouTube. (The Berlin Philharmonic and The Philadelphia Orchestra would do something similar a couple days later.) Then in June, the Left Coast musicians put together a program of solo and duet repertoire, “Sheltering Music,” the only music anyone was playing at that time.

This week, the ensemble shared the first concert of its 2020–2021 season — still online but inching closer to the kind of program Left Coast would have played live less than a year ago.

“Soft-Spoken” — streamed on Sept. 21 on YouTube, recorded before then at the Women’s Faculty Club at UC Berkeley — put Left Coast’s flute player Stacey Pelinka front and center. Conceptually, the program took advantage of its recorded setup; in a concert hall, even the gnarliest flute playing takes on a uniform soft sweetness. So the chance to hear the instrument “up close” (on video) justified things, splitting the difference between a standard chamber-music program and the still somewhat strange online format.

In performance, the spotlight didn’t always stay on target. The two standard works on the program showed why they’re standards: because they showcase the flute. Albert Roussel weighted the parts equally in his Trio for Flute, Viola, and Cello, Op. 40, but in a way that brings out the character of each instrument. High sustained lines and punchy accents in the flute, alternating motoric rhythms and melodies in the viola and cello — the Left Coast players broadly caught the shifts from part to part and mood to mood, and there are a lot. Roussel’s version of French salon music is particularly schizophrenic.

Beethoven’s Serenade for Flute, Violin, and Viola, Op. 25, is more obviously flute forward; it’s the kind of piece where you think, “Ah, there’s the violin solo.” Pelinka, violinist Anna Presler, and violist Kurt Rohde started each movement high-energy, though the six-movement work, which came at the end of the concert/recording session, lost steam in its middle sections. The Serenade is an early Beethoven piece, and so a minuet and a theme and variations lie at its center.

For the Left Coast players, Zeppelin, by composer Laurie San Martin, brought out some of the same instrumental strengths as the Roussel and Beethoven trios. The three-movement piece, for flute/alto flute and cello, succeeds especially on the power of allusion. The flute dives onto a long trill after a chaotic section, much like the “Spring Rounds” music from The Rite of Spring. Pelinka and cellist Leighton Fong captured many such transitions and ends of phrases stylishly.

The other new music on Left Coast’s concert got caught between instruments and internet. The program’s title piece, Soft-Spoken by David Dominique, here in its world premiere, had alto flute, viola, and cello moving mostly as one. It’s a conceit that would work in the blending of a concert hall but, under the scrutiny of a microphone and camera, came off as decidedly viola heavy.

Two “remixes,” by violist and composer Rohde, got more out of the alto flute but similarly needed a different space. blued, after Joni Mitchell’s “Blue,” was pleasant, almost Appalachian sounding — the sort of music you’d want to hear outside. Ave, after Hildegard von Bingen’s Ave Maria, was packed with extended techniques, extra music stands, even found sounds (the UC Berkeley Campanile ringing in the background). The spatial setup was daring but needed to get past the computer screen.

In Search of Harmony: Audio and Visual at Left Coast Chamber Ensemble

Music and film combine in a concert presented by Left Coast Chamber Ensemble, challenging the eyes and ears to find harmony between the two.

Congratulations to the winners of the annual SFCV readers’ poll.