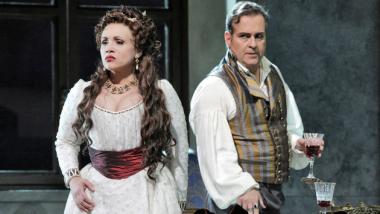 Anyone who watched her without attending to her singing might have thought soprano Carmen Giannattasio was playing a soubrette role as the title character in San Francisco Opera’s new production of Tosca. In the first act she flounced and pouted and toyed with her lover, the painter Cavaradossi (tenor Brian Jagde). She picked up one of his paintbrushes and playfully brandished it like a weapon, then proceeded to treat him like a coloring book, daubing and stroking his beard like a naughty child. Her ostensible respect for a statue of the Madonna got a laugh from the opening-night audience — it seemed more pose than piety.

Even when things heated up to a murderous pitch, in her confrontation with the villain Scarpia (baritone Scott Hendricks) in Act 2, Giannattasio retained a certain girlish, impetuous air. The way she chose the dagger to kill her menacing adversary was not played as some surreptitious calculation but rather as an idea that sprang on her full-blown. She yanked the blade free from a shield bristling with others and seemed to thrill at the sight of it. In the final act she bustled around impatiently to get the supposedly staged shooting of Cavaradossi underway.

The soprano was singing throughout, of course, and that’s where the dramatic weight and momentum of this sometimes sluggish and mannered Tosca took hold. In both her role and company debut as Puccini’s tragic heroine, Giannattasio brought a ripe and captivating immediacy to almost every note she sang — and sometimes strangled out in a hoarse, stricken whisper.

In her exchanges with Jagde, who was reprising a role he played here with authority and a thunderously exciting voice in 2012 and 2014, the soprano made her expressions of ardor flicker with alternating currents of eroticism and jealously. Her voice searched out, scoured out every unstable molecule of feeling. The two lovers sounded urgent and rawly exposed together, never more so than in their unison and parallel lines of exultation just before the Act 3 execution.

In “Vissi d’arte,” the defining test case of the role, Giannattasio filled that meditation on art, love, and fate with quiet, pressing conviction. She began the number when she was down, all but face-down on the floor from the force of Scarpia’s threats as the aria began. Rising eventually to her knees, she was at once outwardly prayerful and inwardly consumed by her own thoughts. It was a marvelous centerpiece of a complex and coruscating performance.

Jagde more than held his own, whether he was belting out a torture victim’s defiant “Vittoria!” at the news of a military reversal for Scarpia or caressing his way through “E lucevan le stelle.” While Hendricks lacked a measure of vocal thrust and sneering poison — his “Va, Tosca!” at the end of Act 1 never took fire — his languorous self-absorption in Act 2 was freshly sinister. Tenor Joel Sorensen’s nasty, nasal voice was just right for Scarpia’s henchman Spoletta.

In another and decidedly less auspicious San Francisco Opera debut, conductor Leo Hussain led a largely charmless and under-characterized reading of the score. His tempos were slow, and the phrasing often flaccid and inexpressive. The brasses let out some arresting and suitably alarming exclamations. But they weren’t enough to redeem the steady drag on the proceedings from the pit.

Directed by Shawna Lucey, with sets and costumes by Robert Innes Hopkins, this new Tosca is distinguished primarily by a new color palette and some directorial flourishes. More compressed and less spacious than their Thierry Bosquet predecessors, the sets feature red church walls in the first act and a blood-red Roman sky glimpsed through Scarpia’s Palazzo Farnese windows in the second. Paintings and sculptures proliferate, chiming with the opera’s preoccupation with art.

Lucey’s direction is better with small touches than blocking and crowd control. In one subtle moment, she had Scarpia wipe his own, sweaty face before faux-graciously offering Tosca his handkerchief. A boy playing with a soldier’s gun, miming a shooting just before it took place, added a premonitory shiver. The shadow projections of Cavaradossi’s offstage torture were a misstep: the awful power of imagination built into the libretto and score is more effective than literal illustration. The big “Te Deum” scene in the church looked chaotic and lacked dramatic focus, even as the stage was suffused in a rancid yellow light (design by Michael James Clark). As the sacristan, Dale Travis indulged in arm waving and broadly physical humor that verged on parody.

In the end, this Tosca is largely about the Tosca that Giannattasio etches so forcefully. It’s fitting that she makes her famous final exit from a very high wall. This brilliant soprano aspires to great heights all the way.

Letter From London: There Will Be Blood in English National Opera’s Salome