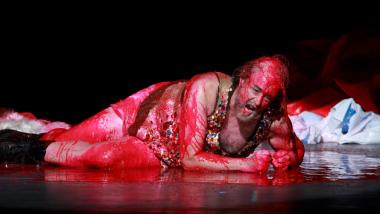 Letter From London: There Will Be Blood in English National Opera’s Salome

There was blood — lots of blood, and lots of sliding around and wallowing in blood — on the stage of the London Coliseum during English National Opera’s (ENO) Sept. 28 opening night performance of Richard Strauss’s Salome. Even the plastic bag which held the severed head of John the Baptist oozed blood when squeezed.

Those who tried to make sense of the “boldly feminine production” from Adena Jacobs likely bled as well. According to statements by ENO’s Artistic Director Daniel Kramer and Music Director Martyn Brabbins in the program book, Jacobs’s Salome was one of five productions in the company’s fall season that “explore the idea of masculinity: what a healthy masculine might encompass, what an improved balance of masculine and feminine might look like, and the changes we need to make for this to be possible.” The men also claimed that the production “fortifies [Jacobs’s] canon…from her native Australia…where her theater work is celebrated for its questioning of conventional patriarchal attitudes as she reframes mythic stories through a lens that is radical, contemporary, and feminine.”

None of this fully addressed why both Narraboth (tenor Stuart Jackson), the young Syrian warrior who slays himself over Salome, and King Herod, Tetrarch of Judea and Salome’s stepfather (tenor Michael Colvin), wore lipstick and, in Herod’s case, somewhat feminine garb, unless Jacobs associates lipstick with weakness, and Salome’s seduction with strength. And that was just the start of one puzzling effect after another that seemed an outré attempt to put a feminist spin on a sensationalist work of art that is hardly feminist to begin with.

Also questionable was the suitableness of the London Coliseum’s theater acoustic for Brabbins’s all-out, “no note left behind” conducting, which often covered the voice of his Salome, mezzo-soprano Allison Cook. At the start of the first season that fully bears his imprint since he became ENO music director, Brabbins was unable to address the Coliseum’s bright but fragmented, midrange-deficient acoustic, in which the orchestra’s different parts never fully cohere. With his forces blaring away, he made it extremely difficult for Cook to be heard over the din.

Making her house and role debut, 20th-century music specialist Cook may have been relatively young, thin, and attractive, but there was nothing remotely sensual about her voice. Admirably secure, albeit with some occasional range breaks, its sounded neither like a madwoman, a rebel seductress, or someone to whom a king might have offered half his kingdom in exchange for a dance. A mad king might have fallen for this Salome, perhaps. But audiences are not filled with mad kings.

Nor did Cook do much more than slide, slither, and pose as she sang. She certainly “passed the test,” as it were, in her brief turn as a bare-breasted adolescent early in the opera, but once she covered herself, she shed neither top nor veils during her famous dance scene. There is certainly artistic precedent for having someone other than Salome do the Dance of the Seven Veils — here we had four young women doing extremely athletic, modified disco moves choreographed by Melanie Lane. But what Cook’s lounging about on the huge, beheaded stuffed pink horse (or was it a pig?) that hung from the rafters as she played with its garlanded entrails during the dance signified, and what it had to do with feminism or patriarchy, is one of many questions left unanswered by the five impressively written program articles that included not a single quote or explanation from the director.

When I sought clarification about the pink creature from ENO’s press agent, Fred Maynard, he replied, “I’m afraid I am not at liberty to comment on the director’s meaning other than to say that Adena was looking heavily at images associated with femininity over the years.” That does, in a way, explain the flowers, and suggests an oversized pink toy horse rather than a pig, but nonetheless.

Moving on from a production that frequently drew attention away from the singers, much of the cast was exceptional. In his house debut, young Jackson sang with such tonal beauty, sweetness, and surety as to elicit cheers and guarantee a lovely career. He also sounded sensitive enough to kill himself when he recognized his complicity with Salome’s evil.

Colvin, in turn, sang with force and impressive tone as he tore up the stage with his riveting portrayal. He was superb. Herodias (Susan Bickley), his wife and Salome’s mother, sounded and looked apt, and smaller roles were handled perfectly. The only vocal disappointment, besides Cook, was the frayed top of John the Baptist (bass David Soar), which sounded especially worn when amplified during his time in the cistern. Given that Soar wore a curious cordless video camera contraption on his face — it looked a bit like a metal beak — that projected his unusually sensual lips onto a large screen. I wonder if he was cast specifically for his physiognomy.

When all was said and sung, ENO’s Salome was yet another case of a runaway concept taking its toll on great music and thoroughly dedicated singing artists. Enough.

Letter from Paris: Kaufmann and Jaroussky, Back to Back

The absurd wealth of the Parisian music scene is only hinted at with a pair of recitals by two of the best male vocalists in the world.

Dido and Cleopatra are warp and woof of an entertaining recital of Baroque gems.