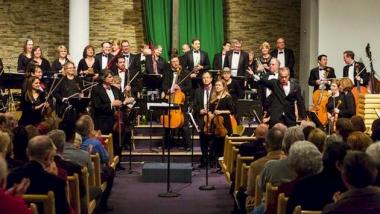 The Fremont Symphony Orchestra began its season on Saturday, September 26, with a sparkling, imaginative, even exotic program. Jung-Ho Pak guest conducted a concert of six works that included two by East Asian composers, as well as an unusual work of a different kind: a 20th-century organ concerto. The concert was held at the symphony’s current home, the Prince of Peace Lutheran Church near the Fremont Hub.

Pak, an American of Korean ancestry, is possibly best remembered here for his stints directing student orchestras at UC Berkeley and the San Francisco Conservatory of Music in the 1990s. He gave lucid, descriptive introductions from the podium for each work. He emphasized the contemplative qualities of the two Asian compositions, Romance of Hsaio and Ch’in by Chen Yi, a Chinese-American known locally from some Women’s Philharmonic concerts years back, and excerpts from Toward the Sea by the renowned Japanese composer Toru Takemitsu.

Both were brief, quiet, and gently layered works of great beauty. Takemitsu’s composition emphasized Debussy-like harmonies and fragmented phrases, while Chen’s had a more broadly-knit lyricism in the pentatonic scale. They shone in the church’s sanctuary, a space whose bright yet gentle acoustics mirror its luminous, open appearance. Both works featured soloists from the orchestra: concertmaster Philip Santos and violinist Sergi Goldman-Hull in the Chen piece, and Marian Concus on alto flute and Randall Pratt on harp in the Takemitsu. The orchestra’s strings melded fluidly with the horn, and the oboes buzzed engagingly.

More musical beauty was on display in works by two of the greatest purveyors of beauty in the repertoire, Mozart and Tchaikovsky. Meredith Brown, one of the most sterling of local hornists, played Mozart’s Horn Concerto No. 2, K. 417, with a warm, smooth tone, a particularly impressive command of trills, and such mastery of the famously difficult instrument as to avoid entirely any tension over whether it would behave properly. The orchestra’s strings melded fluidly with the horn, and the oboes buzzed engagingly.

Tchaikovsky’s Serenade, Op. 40, was the big all-string work of the evening. Here the medium-sized orchestra demonstrated heft and body in its playing on its own. This wasn’t the most subtle of performances — ritards in the waltz movement were somewhat abrupt and hairpin — yet it was well-executed. The rich sound quality in Tchaikovsky’s mature late-Romantic language and the long-spanning phrasing were the winning qualities here.

The string players gave further demonstration of their sensitivity to phrasing in the oddball ringer on the program, the Allegretto from Palladio by Karl Jenkins, known for its use in jewelry commercials. This was guest-conducted by Judy Lam, who had won some sort of raffle for the honor. Lam is the director of a group called the Virtuoso International Flute Ensemble, but this was, she said, her first opportunity to conduct a symphony orchestra.

The program placed Jenkins’ pop-derived chugga-chugga rhythms right after the Mozart, not the best place for a lesser composer to demonstrate Mozartean mastery of profundity within simplicity. Yet the orchestra’s sensitivity to phrasing kept the music from sounding incongruous.

The toughest work on the program was Francis Poulenc’s Concerto for Organ, Strings, and Timpani, a long single-movement cascade of moods from serious and introspective to jaunty. Pak suggested that the quieter parts of the concerto bear an Impressionistic air resembling Takemitsu’s. I did not hear much of such an air. I did note a smoothing out of the more jagged parts of the concerto, making them less alarming than they could be, and more appealing as they should be. This was particularly true of Michael Touchi’s gentle touch in the extensive solo part.

Organists are often invisible to the audience. Here, thanks to the ingenuity of church management, a video display of the organ’s three manuals and Touchi’s fingers flashing over them appeared overhead. This brought the organ intimately in to the performing circle of this gracious concert.