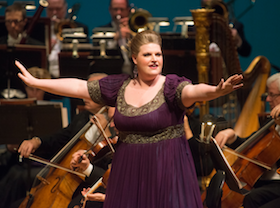 Yet again, the aptly named annual Adler Fellows Gala Concert, "The Future Is Now," confirmed that San Francisco Opera’s year long training program prepares apprentice artists for greatness. Not even the concert’s date, Thanksgivukkah Eve; the distinctly un-central location, the Scottish Rite Temple at 19th Ave. and Sloat; nor the persistence of an annoying electronic hum throughout the evening could dim the luster of some of the finest singing heard from the San Francisco Opera Adler Fellows since 2011, when Nadine Sierra, Ao Li, Leah Crocetto, Susannah Biller, Maya Lahyani, and Brian Jagde all participated in the program at the same time.

Without discounting the estimable contributions of each of the 11 singers showcased in the 2.5 hours concert, three stood out: soprano Erin Johnson, who begins her second year residency in 2014; departing baritone Ao Li, whose three-years as an Adler equipped him for his 2013 Operalia Competition triumph; and baritone Joo Won Kang, who departs after a phenomenal showing. If these three do not score leading roles in major houses well before the end of the decade, something is very wrong with the world.

Given that it’s Thanksgiving weekend, let’s focus on what’s right. Johnson bowled us over with the power, depth, and dignity of Cassandre’s “Malheurex roi” from Berlioz’ Les Troyens. Her bearing is classic, and her voice is prodigious in volume, plush on the bottom and throughout the midrange, and filled with heroic colors.

Johnson confirmed her versatility by returning with Hélène’s coloratura showpiece, “Mercé, dilette amiche” from Verdi’s I Vespri Siciliani. Here, her combination of coloratura flexibility and voluminous beauty brought to mind the great Anita Cerquetti. Not everything was perfectly placed, but so much was sensational, and her growth so notable over the year, that another year of training just might propel her to Verona, La Scala, and onto our main stage.

Li must have bowled over Plácido Domingo and crew with his handsome, dark sound and gravitas. Beautifully supported by the San Francisco Opera Orchestra, whose glorious sound pealed forth from behind him on the large stage, his performance of “Vyes’ tabar spit” from Rachmaninoff’s Aleko confirmed his excellence. Even in ensemble appearances, Li stood out, not only for the quality of his voice, but also for his absolute delight in mugging up a comedic storm.

In Kang’s two Verdi scenes, first as Simon Boccanegra to soprano Marina Harris’ Amelia, and then as Rodrigo to tenor A.J. Glueckert’s Don Carlo in “Son io mio Carlo … Per me giunto,” he confirmed that he is, if not the Verdi baritone of the next decade, then one of the select few who will inherit that mantle. Not only does he have a tremendous voice that projects a fireworks display of dark colorations, but he also possesses the impeccable control needed to taper Boccanegra’s final utterance, “filia,” to a breathtaking thread

Two handsome first-year bass-baritones who remain with us through 2014, Philippe Sly and Hadleigh Adams, made a significant impact. Adams’ voice has always impressed with its strength and beauty; to these attributes he added a surfeit of engaging personality in both Count Almaviva’s “Hai già vinta la causa” from Mozart’s Le Nozze di Figaro and “E il dottor non si vede … Pronta io son” from Donizetti’s Don Pasquale, where he was joined by first-year soprano, Jacqueline Piccolino. Sly’s voice sounded tailor-made for Leporello’s Catalogue Aria from Mozart’s Don Giovanni, but in both it and “Eh, mais, quelle triste observance! ... Dans ce lieu solitaire” from Rossini’s Le Comte Ory, his facial expressions proved more telling than his unchanging color and somewhat deadpan delivery.

First-year tenor A.J.Glueckert’s aria from Gluck’s Iphigénie en Tauride was over much too fast, but his fine rendition of Walther von Stolzing’s Prize Song from Wagner’s Die Meistersinger von Nürnberg evidenced his potential as a Wagnerian lyric tenor. The voice, at present, seems a bit small and lacking bloom at the top, but the intrinsic beauty of his tone in his second foray into Wagner this fall suggests that he will blossom in 2014.

If anyone has bloomed in their final year in the program, it is departing mezzo-soprano Renée Rapier. The richness and gravity of her “Fia dunque vero, o ciel … O mio Fernando” from Donizetti’s La Favorita, graced by impressive low notes and a solid albeit brief high ending, won us all over. Equally gratifying was her heavenly blend with Harris in Puccini’s Butterfly / Suzuki duet, “Scuoti quella fronda di ciliegio.” She also won the Best Dress of the Evening Award.

Beautiful mezzo-soprano Laura Krumm, always a delight onstage, shone in Rossini’s great closing aria from La Cenerentola, “Nacqui all’affanno … Non più mesta.” Her tone was handsome, the coloratura fluent, and the trill quite good. But was this showpiece taken at such a fast clip to avoid exposing the shortness of her climactic high note?

Harris, who has completed her two-year Adler Fellowship, stole my heart with the sheer loveliness of her tone. The voice isn’t that large, but the fragile beauty and idiomatic inflection she brought to her Boccanegra scene with Kang, Agathe’s demanding “Wie nahte mir der Schlummer … Leise, leise fromme Weise” from Weber’s Der Freischütz, and the Butterfly duet are major assets. First-year Fellow Piccolino sang with laudable solidity and beauty. Signs of nerves — she was forever adjusting her dress in her duet with Adams — suggest that as confidence grows, the voice will open up.

Stephen Lord proved a true singer’s conductor. With the orchestra freed from the confines of the pit, he allowed it to bloom gloriously in aria after aria without ever overpowering the singers. Lord’s acute awareness of his singer’s strengths and limitations enabled each and every Adler to shine.