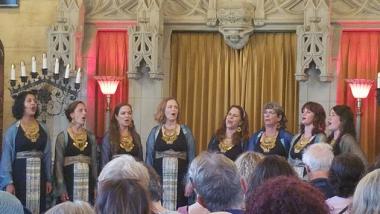 The quick and the dead have come together since what had been a Key Car line station was converted to a crematory and columbarium, in 1909, at the north end of Piedmont Avenue in Oakland, where, if you will, it dead-ends into cemeteries.

What is now called the Chapel of the Chimes received attention from notable architects, among them Julia Morgan, who expanded the buildings into a series of several chapels, cloisters, alcoves, gardens, and so forth which, since 1996, have hosted the Garden of Memory, a summer solstice walkthrough. New Music Bay Area coordinates the event, which favors live performances by what the organization’s mission statement describes as “composers, performers, and presenters of new musical, mixed media, and performance art works.”

With my first-ever participation in the event this past Friday, I discovered that it’s really not that quick for the quick. Parking places fill up long before the 5 p.m. start, and crowds crowd in early, filling up the myriad hallways, staircases, and seats for the most popular of the sit-down acts. The assembled seemed mostly as if they didn’t have to tolerate rush hour traffic across the Bay Bridge as I did, because they already live on the right side: middle-aged and elderly folk, mostly white, who, if they didn’t currently teach at Berkeley or Mills, might well have attended those schools and acquired somewhat exotic musical taste. There were also younger couples, some wreathed in flowers, and the occasional curious kids. The best — or maybe the only — way to go, I figured, was to merge with the swarm in the benign appreciation of the rather rococo beauty of the place and the certifiably summertime climate entering with them through the large open front door.

Pianist Sarah Cahill, a member of New Music’s board of directors, had packed the pews in the so-called Chimes Chapel on the first floor of the building, her New Agey arpeggiations invoking a reverent but not somber reflection on the transience of life, her flaming hair cheering the chromatically noncommittal room. She moved on to a rag, which I think had something to do with Terry Riley; although the chapel had been fitted with speakers, she didn’t make use of them for her announcements, and thus wasn’t clearly audible beyond the first few rows of pews.

It can be said that Cahill’s approach to her musicmaking there rather paralleled the approach of the designers of this space, referencing tradition but in a disparate manner. Consider the rose windows, which meekly suggest the stained glass of a church, and Cahill’s inclusion of a piece by Theresa Wong, where koto-like glissandi and allusions to Asian pentatonic modes give way to Brittenesque tone-poemy musings.

Cahill’s set in the Chimes Chapel, where no act was booked for more than 20 or 25 minutes, was followed by the East Bay Eastern European women’s chorus Kitka, which brought songs selected because of their estival origins in the old countries, where the solstice is a bigger deal than it is here. The loveliness of the melodies, plaintive but fragrant, and the power of the diaphonic delivery served both to render the space more venerable and to transcend any boundaries of language, place, and style. Through the windows, external foliage seemed to be yearning toward the many-body-heated celebration on the inside. After the last song of the set and a standing ovation, the crowd oozed slowly out into the vestibule, chatting as if having witnessed a sermon auguring happier times.

As far as I could make out, there was no complete schedule of performances for the 50-plus participating acts, and even if there had been, finding particular performers and their positioning among the two-dozen-some locations within the labyrinthine, three-level building seemed virtually impossible, despite the “Performance Map” handed out at the front door. Some of the individual venues had lists of acts and times displayed in their entranceways, but of course you had to find the places in the first place. I realized yet again that I’d have to surrender to the circumstance, and to aleatory audible clues.

This process led me up one of several staircases and into what was labeled on the map as the California Columbarium. A man with an electronic control pattern twiddled dials for a performer on alto clarinet, identified for me as Dan Plonsey, tooting his reed wildly among the compartmentalized brass urns of the departed. Among the living and familiar, I recognized and greeted Bruce Ackley and Larry Ochs of the Rova Saxophone Quartet, scheduled to succeed Plonsey at the same location.

In what I think was the Palm Garden, further back, I came upon an idyllic setting for the calmest music I’d hear, made by cellist/composer Dylan Mattingly and violinist Eli Wirtschafter. The few folk attending felt like a bit of a relief from the madding crowd, and the mode evoked North Indian classical music, with drones and alluring vibrato.

A different stairway led to the Julia Morgan Chapel, where Paul Dresher and Joel Davel constituted a much louder duo, deploying tuned percussion and electronic effects, amplified through speakers. As with the Chimes Chapel, this was a larger, crowded venue, with overflow seated along the central aisle. As minimalist musical patterns echoed the patterns hanging on the wall behind the players, one audience member treated her partner to a massage.

No way could anyone see everyone everywhere at the Garden of Memory, particularly those of us having to fulfill others of the evening’s obligations on the other side of the Bridge. But there’s always the chance for a better-prepared revisit a year from now.

Renowned critic, commentator, and radio host and longtime friend Derk Richardson, whom I encountered in a hallway, pointed out there was considerable variety among the offerings, including big band jazz and many kinds of world musics. About a third of each year’s bookings are new, he said, though the many repeat attendees expect to find their favorite acts returning also. Richardson was relieved that this year’s Garden was far less daunting in terms of temperature and numbers of people than had been last year’s.

But, as my companion and I ambled out along Piedmont Avenue through the persistent but settling light of the solstice evening towards our lucky parking spot, there were many more smiling pilgrims headed in the opposite direction, towards the remains of the day and the music.

The local power violin-piano duo explores contemporary music in a way that everyone should celebrate.