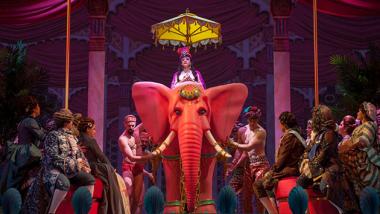 Ghosts of Versailles Back From the Dead

Aaron Copland once advised a young John Corigliano “never bother with writing an opera,” pointing out that in the amount of time it would take to put it all together he could write three symphonies.

Corigliano took the advice to heart. So when he was initially approached to compose a celebratory opera for the Metropolitan Opera's 100th anniversary, he politely declined. The Met, however, had the power (and the checkbook) to make Corigliano an offer he couldn’t refuse. The result was The Ghosts of Versailles, an opera so vast in scale that Corigliano and his librettist, William M. Hoffman, did not deliver the finished product until seven years after its initial deadline.

That very size (which wowed the audiences at the Met) made the opera too much of a challenge for most companies to produce. A chamber-sized version received several productions. But in its original form, much like its spectral characters, the opera disappeared.

That is until Saturday, when L.A. Opera summoned The Ghosts of Versailles back from the netherworld and presented it in a grandly scaled new production, which showed by its musical quality that the work is worthy of many more revivals.

It was a gamble that pays off brilliantly thanks to the exceedingly adroit direction by Tony Award-winner Darko Tresnjak (A Gentleman’s Guide to Love & Murder); the architectural grandeur of Alexander Dodge’s set design and its fisheye lens view of Marie Antoinette’s Petit Trianon theater; the lavish period costumes by Linda Cho; the choreography of Peggy Hickey; the sculptural lighting by York Kennedy; and the illustrative projections by Aaron Rhyne.

A cast of 80 singers, dancers, and acrobats, along with one playful, pink pachyderm, filled the stage of the Dorothy Chandler Pavilion, enacting a libretto whose interweaving plotlines span the centuries, freely interpolating the comedies of Pierre Beaumarchais in a surreal context, with a dash of zaniness worthy of the Marx Brothers thrown in for good measure.

Under the leadership of James Conlon the orchestra and singers evoked the operas of Mozart and Rossini; the grandiosity of Wagner and Strauss; the modern atonal and aleatoric (chance) techniques of John Cage; with a splash of Leonard Bernstein’s Candide. But Corigliano's score is no mere pastiche, it's a beautifully integrated kaleidoscope of historical styles and influences, unified by Corigliano's knowledge and craftsmanship, which allows him to fluidly crossfade between styles.

Corigliano's score is no mere pastiche, it's a beautifully integrated kaleidoscope of historical styles and influences
The Ghosts of Versailles plays out on three different time planes. The first realm is the netherworld of Versailles where the ghostly aristocrats of France pass the time in a succession of nostalgic reveries. Having lost their heads to the guillotine, the singers (dressed in black) are accompanied by their headless body doubles (dressed in white with their heads shrouded under black hoods). Marie Antoinette (Patricia Racette) is particularly distraught, unable to stop thinking about the world she’s lost, the horrors of the revolution, her trial and brutal execution.

Enter the playwright, Beaumarchais (Christopher Maltman), who proposes to restore the spirits of the queen by presenting a performance of a new opera based on the third drama in his Figaro trilogy, The Guilty Mother, which takes place 20 years after the events depicted in The Marriage of Figaro. “My words,” he proclaims, “have the power to change history!”

The plotlines collide when Figaro (Lucas Meachem), Susanna (Lucy Schaufer) Count Almaviva (Joshua Guerrero); Rosina (Guanqun Yu) and Cherubino (Renée Rapier) run headlong into the madness of the French Revolution and the lassitude of the ghosts of Versailles. But there is also romance and all the antics familiar to opera buffa, including a madcap climax to Act 1, (a Turkish delight) that provides an eight-minute star-turn cameo for Patti LuPone as the Pasha’s seductive songstress, Samira.

The third realm is the French Revolution (circa 1793) and the bloody Reign of Terror personified by the opera’s arch villain, Citizen Bégearss (Robert Brubaker), truly a rat among men.

The Ghosts of Versailles is by turns fascinating, musically provocative, lyrically entrancing and laugh-out loud outrageous — a feast for the eyes and ears. The plots, however, are so complex they become baffling — a situation even the ghosts find exasperating. There are also times, particularly in Act 2, when less could definitely be more.

Patricia Racette gives a commanding performance as Marie Antoinette, combining wistfully naïve nostalgia with nightmarish horror. It’s a dialectic personified in her opening aria, “Once there was a golden bird.” Intensity is the key to Racette’s performance, accentuated by a voice that can float on the air or slice like a blade.

Patricia Racette gives a commanding performance as Marie Antoinette, combining wistfully naïve nostalgia with nightmarish horror.Her confidant and would-be rescuer, Beaumarchais, is sung with elegance and flair by Maltman. But it’s Meachem’s Figaro who towers over the action, complete with a patter aria that would make Rossini smile and a cross-dressing scene worthy of Groucho Marx.

The wistful nature of romantic love is personified in the dulcet singing of Guanqun Yu as the Countess and the thwarted lovers Florestine (Stacey Tappan) and Léon (Brenton Ryan), who are also the illegitimate offspring of the Count and Countess.

Ideally the evil figure of Bégearss should combine the nastiness of Wagner’s dwarf, Mime, with the imperious power of Puccini’s Scarpia. Unfortunately Robert Brubaker is not really able to fill those demonic shoes.

The successful production finally expiates the financial specters that resulted from the production of the Ring and the recession which took the company to the financial brink. The Ghosts of Versailles is a bold declaration that the company has returned. When Figaro proudly proclaims, “I’m home,” Los Angeles Opera is making the same claim.