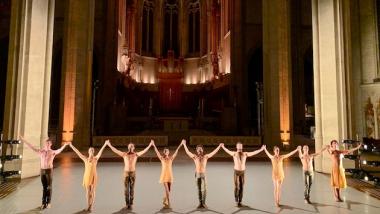 By the Grace of Alonzo King

Heaven knows, we need a little grace right now. So how striking it was to see it so generously brought forth at San Francisco’s Grace Cathedral, no less, last weekend. Choreographer Alonzo King, wrapping up a year as Grace’s artist in residence, brought 11 dancers of his Lines Ballet to the cathedral’s nave for a program of three offerings — interesting how a word like “offerings” just seems to fit in this context — in the space of an hour. The final and longest work, Grace, was a world premiere, but if you missed it, it will be on at YBCA April 10–19, during the Lines spring season.

It remains to be seen whether the magnificent space of Grace can be theatrically duplicated. The pillars surrounding the cathedral’s nave, in their seemingly infinite height and lengthened shadows, reflected the dancers’ attributes — many, whose backgrounds are as diverse as their appearance, are stunningly tall and slim. Those who are not are every inch their equals in their devotion to the highest, the widest, the tightest, the fastest, the slowest—in short, the very best expression of King’s work, set to wildly varied composers and musicians.

Grace’s net impact, then, draws from brilliance — or aspirations to it. There are 15 sections, each a work unto itself; it was possible to think of these creations as being separated and reassembled to suit the needs of other performances, Merce Cunningham Events-style.

The opening piece was set to a traditional Native American song, “Aiyana,” led by dancer Madeline DeVries and dancer Michael Montgomery, doubling on lead vocals. The dancers aren’t trained singers, but they could have fooled this onlooker.

Energy pervaded, whether at allegro or adagio or stock-still moments; the dancers moved seamlessly from solos to ensembles, floorwork to airborne. The women were occasionally on point (a Marley dance surface covered the stony floor) but usually in slippers.

The vigor of some movements was extraordinary, seemingly dangerous; men and women leapt twice their heights, or so it often seemed, and definitely three times their breadth in the grandest of grand jetés. The phrase “acrobats of God” is not misplaced here; look up Martha Graham and you’ll see it again. But the most tender and reflective adagio moments seemed equally compelling, suited to the spiritual shelter of this space and the music soaring within it.

Sculptural arrangements — there were eight or nine dancers in one chain — reflected the effort, risk, and security of mutual support, physical and spiritual; curling around, over and under each other’s arms and legs and torsos, these tableaux seemed right at home, like marble sculpture in a niche, glowing in the dimness.

The dancers of the ensemble each came bearing gifts. They included Adji Cissoko, the tallest ballerina, 5-foot-11 and grace’s embodiment. The tallest man, Lorris Eichinger, looks slightly involuted, and as a mover absolutely stunning. Robb Beresford is a fine and supportive dancer, seemingly always there at the moment he’s needed. Alvaro Montelongo, from Guadalajara, Mexico, is a cum laude grad of USC’s Glorya Kaufman School of Dance. And so it goes; sometime singer Montgomery is a graduate of the Lines BFA program at Dominican University. Shuaib Elhassan, from New York’s lower East Side, pops off everywhere, high and low, from a tightly corked center; Madeleine de Vries, lit from within and propelled as if by wings; Ilaria Guerra, gentle and then bitingly staccato; Ashley Mayeux, formerly with Alvin Ailey American Dance Theatre, and wait a minute, James Gowan didn’t start dancing until he was 16. Impossible.

Here are some of the creators and performers of music, rhythms and chants, songs and arias: Poulenc, Fauré, Thomas Aquinas, Handel, Bouchaib Abdelhadi, Yassir Chadly, Hafida Ghanim, Al Hamadeen, Trevor Lawrence and Gabriel Meckler, Kathleen Battle, and Etta James. (Leave it to her to wrap the whole thing up.) And here are thank-you’s to Danielle Colburn for the inspired and inspiring lighting, and to Robert Rosenwasser for the exquisitely fluid, neutrally colored costume designs.

There are times when the cynic might feel that King is overdoing, or perhaps overreaching, or that the dancers appear — well, slightly overawed; that if you want to send a message, Western Union, or its social-media successors, might be best. But at this juncture your reviewer needs whatever King’s company’s got in mind, even, or at the very best, if it’s a mind at work, as Hamilton would have it.

Alonzo King, said Malcolm Clemens Young, the cathedral’s dean, in a preshow talk and prayer, is a man of many gifts: “He has shown me how physical gestures are often more profound than words, that what we do with our body has a fundamental effect on our spirit.”

What did such a glorious mixture mean, to its creator, its dancers, the church on California Street, its audience on Saturday night? Let’s just recall the full company, moving across the floor as if searching from its center to its most obscure corners. The accompaniment was a chant, “Affirmation,” by Paramhansa Yogananda: “For the disease of ignorance, the only cure is knowledge.”

Alonzo King: The Individual Dissolving into the Universal

The choreographer is still stretching boundaries in his collaborations with jazz artist Jason Moran and now Charles Lloyd.

The singer takes center stage with the company for the world premiere of The Propelled Heart.