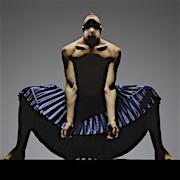 Alonzo King: The Individual Dissolving into the Universal

From October 1–6, Alonzo King and his Lines Ballet bring to Yerba Buena Center another in their ongoing series of collaborations with some of the great musicians and artists of our era. This time, King reunites with jazz pianist Jason Moran (b. 1975), who has spent the last 12 years alternating between solo gigs and work in a band led by King’s other co-collaborator, mind-bending tenor saxophonist and multi-instrumentalist Charles Lloyd (b. 1938). A light installation by Jim Campbell will add further dimension to an exploration that began with the 2016 Lines Ballet collaboration, SAND.

The seeds of King’s work were planted by art-loving parents whom he describes as people lovers who fought against racism. “What my parents preached they actually lived,” he said at the start of a wide-ranging, hour-long phone conversation. “They were ready to die for what they believed in, which stayed with me.”

King’s mother, who danced in Oberlin College’s dance program, taught him movement. His father, who was a civil rights worker who “worked with everybody and contributed to a ton of movements,” introduced him to yoga, which he says “changed my life completely and opened the doors to metaphysical thought. It helped me understand that so many of the classical ballets are metaphysical fairytales that contain truths that most people have gotten confused about.” If that doesn’t give you a hint of what’s in store when the curtain opens on King’s latest exploration, please read on.

This is not the first time you and Jason Moran have collaborated. How did the circle expand to include Charles Lloyd?

Jason’s wife, Alicia, is a singer who brought Jason to a Lines performance in New York for his birthday. He really loved it. We met afterwards, I heard his music, and that was it. After we collaborated together several times, he said, “I’ve been working with Charles. It’s amazing. Let’s do something.” And I said, “Great.”

Does this performance involve precomposed music or free-form jazz?

Both. I described some of the kinds of music that I thought would be interesting in terms of texture, tone, harmony, dissonance, and who was dominant at any given time. I asked for solos from each of them as well as combinations, and they composed music and sent it. They've sent far more than we can use.

But that’s just part of it. There’s also construction where I create work that they look at and construct music for. Because they’ll be here for such a short time, I will send them video of some sketches and opening passages that will have no other audible music. They’ll look at it rhythmically, examine the ideas that exist in the movement, and compose. Then we’ll talk about who is the lead and who is the orchestra. Sometimes the dancers will be the orchestra, sometimes the soloists will be, and sometimes times the dancers will be the lead singers. I want to make space for everyone to participate.

If we just follow the bouncing ball of tempo, it’s not very interesting. So we set up situations where we dialogue. Often the dancer is playing counterpoint. We figure out when to go against the music and when to fall into the music and let it lead. We set up a conversation where we all have space to respond and to lead.

How much time will you actually have together?

We just premiered a work with Jason at the Vail Dance Festival, commissioned by Damian Woetzel, who runs the festival and is also president of Juilliard. He asked me to premiere something, and I said that it would be really helpful if I had Jason Moran as the composer. I adore Jason’s music, and he responds to our choreography’s melodic content. There’s an understanding about each other’s aesthetic that began with our first collaboration, and that mediates issues of time and distance.

What is the possibility that what you start out with on day one will be very different by day six?

That’s always the hope. We have tons of plans and ideas – we put down concrete shapes of what we’re going to do in terms of order, development, contrast and tone – but once we’re all together and onstage, we can’t close the door to what the piece is actually saying and demanding. We’re no longer in a 40 x 40 rehearsal room; we’re seeing it for the first time from a distance that enables us to see what it really is. It’s kind of alarming to move from working in a studio to the stage and see how things how things communicate in a very different space, from a different perspective.

We work speedily, so we change things when there needs to be a remedy. It’s just like writing a novel, where you have to shift things. It can be nerve-wracking, but it’s an inevitable part of the process. If you ignore what the piece is saying is required for it to be alive and radiant, it’s not going to work. Dancers don’t have the luxury of a Broadway show, where you have a year to work things out. We have occasionally received support where we have extra time in the theater, but it’s usually not the case. It’s super high-pressure, so we have to be incredibly calm so that accuracy will prevail.

One of the reasons I like working with brilliant artists is that their intuition is so keen. It has to be. You can’t repeat what happened the night before, thank God. Often, we’ll try to repeat what happened on an incredible night and it doesn’t work. One of the wonderful things about live performance is what people call “mistakes,” where what you planned on doesn’t occur the way you want it to. Those are the most creative places that exist. You have to live in the spontaneity of making choices.

Growth for me is the same as expansion. With making art, you’re hoping to expand the capacity of the mind and heart in a creative way that has no circumference and no borders or boundaries. That’s really the work: how to expand the mental consciousness, and the consciousness of the heart.

Classicism is the aspiration for the Divine. Bach shows you clearly how we should reason and how we should feel, and they are in balance. Great art shows where the heart should be, filled with aspiration for ascendancy from gross matter. When people are dancing, they begin every day listening to the western masters in their head, lifting up their consciousness and actually changing their brain. That kind of absorption can miraculously change who people are; it can work out kinks and bring health to the body and mind.

Music is thought made audible, and dance is thought made visible. Visionary physicists all claim that our universe is one substance, manipulated through vibration to appear different. Matter, liquid, what we call solid is all the same substance, shifting at different rates of vibration to appear like different things: trees, chairs, human beings. The body is an electromagnetic wave. If you know that we live in a vast non-stop ocean of activity, how can you not play with those ideas in your movement?

We live in miracle, but we ignore it. They say that the greatest sin is ignorance. We are in a state where we are achieving these vast technical discoveries, and yet, as human beings, our heart hasn’t continued to expand. There is no compassion. We still see people as aliens who look different than us. There’s an imbalance between our heart and our head. If the head is overly active, art is dry, predictable, flat. If there’ an imbalance in feeling, it can be indulgent, illegible, and chaotic. But if head and heart operate together at a high level, that is intuition. That is the goal for the artist – to make a work of art that is definitive because it is how it should be.

What can people expect to see in this performance?

They’ll see dancers who share the depth of Charles Lloyd and Jason Moran, who work at the highest level. You will see people who are fully concentrated, fully dedicated, involved in depth, accuracy in idea and feeling that is moving. The way our dancers move is quite unusual, and the music of Jason and Charles is different. I can’t tell people how to feel, but I do trust the power of the artists that I’m working with.

There’s a quote from Christ that you never hear Christians say: “Know ye not that ye are gods?” The highest level in all works of art is the statement that we are not weak, limited, whining mortals. We’re gods. Artists have a huge responsibility to recognize, realize, and uncover. Works of art can shake us out of dullness and selfishness; they can shock us aesthetically so that we recognize our power and ability to be larger than what we think we are.

The Talmud says, “We don’t see things as they are; we see things as we are.” With that in mind, I’ve been trying to train myself to have no judgment, to have no idea of how I want it to be, feel, taste, experience, and to just observe. When people are able to come to something and observe without judgment, there’s subliminal vibration going through them visually and audibly that is transformative.

Lines Ballet collaborates with Jason Moran and Charles Lloyd in the Blue Shield of California Theater at YBCA, 700 Howard Street, San Francisco. Performances are October 1–6 at 7:30 p.m., with a family experience on Saturday starting at 11:30 a.m. and matinee at 2 p.m. Performances on October 2 and 3 include post-performance Q&As.
Tickets are $45–95.  (415) 392-4400, www.linesballet.org

The singer takes center stage with the company for the world premiere of The Propelled Heart.