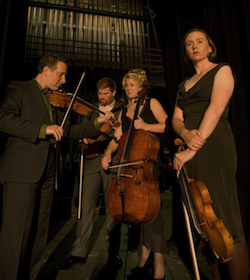 A Graceful Second Response to Call

The Cypress String Quartet has been running its “Call and Response” series for 14 years now, long enough for the commissioning of a new work, an essential part of the process, to come around to one composer for the second time. Since Cypress commissioned Jennifer Higdon’s Impressions 10 years ago, the then lesser-known composer has won a Pulitzer Prize, a Grammy Award, and many other accolades. On Friday, the Cypress concert at Herbst Theatre in San Francisco offered the first performance of a new Higdon work.

The idea of “Call and Response” is that the commissioned work should respond in some way to the call of one or two classic quartets in the repertoire. In this case, the call was from an idea, the melding of poetry and music. Both of the older works on the program — Dvořák’s Cypresses, the work for which the Cypress Quartet is named, and Schubert’s “Rosamunde” Quartet in A Minor — incorporate inspiration from their composers’ earlier songs. Schubert includes reminiscences of two of his lieder, as well as quoting from the incidental music to the play that gives the quartet its name. Dvořák’s work is actually an adaptation for string quartet of an entire song cycle for voice and piano.

Higdon goes further. She actually adds a soprano to her string quartet, a combination of sounds which works gratifyingly well, and one which had been done by other composers before, though not by Schubert or Dvořák. Higdon takes five poems, all with musical references in their texts, by W. S. Merwin, also a winner of the Pulitzer Prize. The work she makes out of them, titled In the Shadow of Sirius after the Merwin collection from which the poems come, is not a string quartet with soprano added. It’s really a song cycle which happens to have string quartet rather than piano accompaniment. (The concert’s encore was the third movement, “To the Point,” from Higdon’s Impressions, full of canons and pizzicato. This work is a string quartet for its own sake, and the difference in approach from the song cycle was immediately apparent.)

Higdon’s writing is so skilled and versatile that she sets one poem, "The Nomad Flute," twice in the cycle in completely different styles of accompaniment.

In keeping with Merwin’s poetic idiom — he writes irregular modern verse and almost entirely eschews punctuation — Higdon’s song cycle consists of chromatic through-composed modernist lieder. Soprano Christine Brandes, the star of the piece, took the poetry strongly and smoothly in a textured, slightly nasal voice. It would have been nice to hear her sing some Schubert and Dvořák songs as well, for a further comparison among the composers.

The quartet’s role in this was no more prominent than that of the piano in a typical song cycle. That’s not to say it was unimportant: The accompaniment sets the style of a song before the voice even enters. Higdon’s writing is so skilled and versatile that she sets one poem, "The Nomad Flute," twice in the cycle in completely different styles of accompaniment. The one is a slow regular pulsing focused on Ethan Filner’s viola and Jennifer Kloetzel’s cello, and the other is high-pitched and piercing, focused on Cecily Ward and Tom Stone on violin, and quite fragmented in rhythm.

Each of the other four songs has a distinct accompaniment style, yet they all sound like Higdon: a hum and buzzing for “Grace Note,” deep wide Americanist harmonies for “Parts of a Tune,” choppy rising phrases, with a most emphatic ending, for “The Laughing Thrush,” and floating post-impressionist harmonies for “From the Start.” The songs were presented in a different order than listed in the program book, suggesting that Higdon is still tinkering with the work, and indeed she mentioned in a pre-concert interview that she often revises compositions after the premiere in the light of how they actually sound in performance.

Dvořák’s Cypresses, in its string quartet form, is a cycle of 12 short songs. Although the first violin carries most of what would be the vocal line, all four instruments get a chance to participate. Because of the pieces’ brevity and beauty, quartet ensembles often use one or two for encores. It’s rare, though, for anyone to play the entire set in one performance. It’s a substantive work of music, a full string quartet in 12 brief movements.

The Cypress Quartet played these largely melancholy pieces in a quiet, contemplative manner, and reinforced that approach in the Schubert. True, the “Rosamunde” is Schubert’s gentlest and most reserved mature quartet, yet nobody else performs it with such stillness and enervation as the Cypress players on this occasion. They felt distant and sluggish, as if they were playing from inside an aquarium tank. In the scherzo, they sort of sidled sideways into the rhythmic groove. Ward as first violinist was particularly reticent; Kloetzel’s cello occasionally broke out for some vigor.

The audience included a large contingent of schoolchildren, brought by the lesson plans based on “Call and Response” that Cypress distributes. Trained, apparently, to clap at every full stop, they applauded every one of the 12 Cypresses songs, as well as each movement of everything else, and even the cadence finishing up the exposition section of Schubert’s opening Allegro, perhaps under the impression that it sounded like the end of a movement.