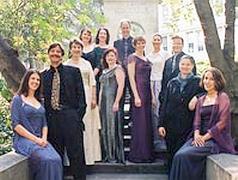 A Great Composer Finds Her Advocates

Kathryn Miller on April 17, 2007
Early-music enthusiasts have been known to say that it's not the size of the voice that counts, but rather the interesting things that it can do. The adage was bolstered by Magnificat's presentation of motets by Chiara Cozzolani on Saturday evening at St. Mark's Church in Berkeley. Encouraged by Music Director Warren Stewart, each of the singers brought individuality, drama, and commitment to the challenging program, and the eight women invested the difficult repertoire with color and nuance. Over the last several years, Magnificat has been recording and performing all of Cozzolani's surviving works, which are found in two volumes: Salmi a otto voci concertati (Psalms for eight concerted voices) and Concerti sacri a Una, Due, Tre e Quattro voci (Sacred concertos for one, two, three, and four voices). A nun (and later abbess) at the Santa Radegonda convent in 17th-century Milan, Cozzolani is thought to have studied with the Rognoni family — well-known music teachers in the city at the time. Her published works originally spanned four volumes, all of which were written for the use of her convent, which was famous at the time for its choir. Cozzolani's distinctive style focuses on contrasts. Long, spun-out homophonic lines turn suddenly to quick moving polyphony, out of which a soloist will emerge, only to be drawn back into the ensemble. These musical contrasts are also paired with dramatic shifts, and the women of Magnificat deftly crafted each moment, infusing phrases with freshness and spontaneity. Each new motive or dynamic bloomed and grew. The opening ensembles started out slightly bottom-heavy, but the group soon found its bearings and the sound became even and balanced. Each singer's voice remained distinct, even in plainchant unisons. While all of the singers were given solo moments in choral pieces, several were featured more prominently in the small ensembles and solos. Soprano Catherine Webster sang the solo motet O quam bonum, O quam jocundum (Oh how good, oh how joyous). The text focuses on the joy of living with the love of Jesus, and Webster gave us not only joy, but elation. Although her diction could have been clearer, her dynamics were impressive, particularly the pianissimos, which sparkled even at the top of her range. Her crystalline phrasing at the words "Ibi gustabunt dulcedinis Paradisi" (There they will taste of Paradise's sweetness) raised the hair on the back of my neck.

While the choral works showed Cozzolani's skill at complex polyphonic writing, several of the small ensembles proved her genius at the dramatic. In the first of these, Ave mater Dilectissima (Hail, most beloved mother), we witness a conversation between the risen Christ and Mary. Christ, sung by Margaret Bragle, began the duet, asking his mother to stop her grieving. Bragle sang warmly, with great expression. Jennifer Ellis Kampani, also prominently featured, portrayed Mary with a delicate touch and arching phrases. The two played off each other wonderfully in the last stanza, with its repeated lines: "Let us all say: Farewell, tears: come, joys. " The other moment of passionate drama came later in the evening in the lush, often sexy Maria Magdalene stabat, performed by Webster, Bragle, Suzanne Elder-Wallace, and Elizabeth Anker. It is the story of Mary Magdalen mourning at the tomb of Jesus, and asking the angels where to find him, only to be told that he has risen. The opening narration, sung with great depth by Anker, presents the situation. We are then treated to passages in which the saint (sung by Webster) refers to Jesus in the language of the famously sensual Song of Songs. The music uses increasing dissonance and phrase lengths, as Magdalen describes her longing for the love of Christ. The reassuring angels were well sung by Bragle and Elder-Wallace. While the choir of Santa Radegonda was particularly known for its development of the lower reaches of the female voice, it was the higher voices that were primarily on display in Magnificat's concert. The plainchants featured Elder-Wallace quite often, but otherwise the low altos (Kristen Dubenion Smith, Elder-Wallace, and Elizabeth Anker), all of whom possess wonderfully rich, dark timbres, were not heard as often as the higher voices. Stewart conducted in a relaxed manner, looking as though he was simply enjoying the moment. He stepped aside for the solo pieces, allowing the singers to work with the three-piece continuo ensemble, as would have been normal in the period. These instrumentalists — Yuko Tanaka on portative organ, John Dornenburg on the violone, and David Tayler on theorbo, — worked well together, giving a strong and stable base to the often busy vocal happenings. They alternated for the solo movements, giving each piece a more individual character, depending on the instrument used and its interplay with the voice. Clearly, care was taken to present Cozzolani as a major 17th-century composer, rather than a little-known novelty. The detailed and complete program notes, by Cozzolani scholar Robert Kendrick, provided insight, not only into Cozzolani herself, but also the religious and musical life of Milan in the middle of the century. We will undoubtedly be hearing much more of this composer in the years to come.