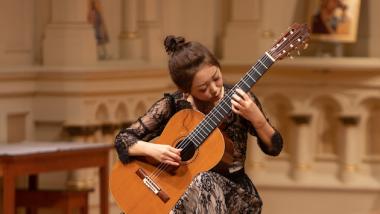 The young Korean guitar virtuoso Kyuhee Park, popular in Japan, Korea, and Europe since winning the Agustin Barrios International Guitar Competition several years ago, made an outstanding San Francisco debut in at St. Mark’s Lutheran Church presented on Saturday by the Omni Foundation. A varied recital reached its apex with works by Barios Mangoré and Alberto Ginastera.

After opening with a finely etched rendition of Fernando Sor’s miniature Etude 6, No. 11, Park performed that composer’s early masterpiece, Grand Solo, Sonata No. 1 in D Major, Op. 14. The large proportions of the work and its many moods gave Park an opportunity to showcase the sensitive musicality and flawless virtuosity that characterized the whole concert. She played the dark and lugubrious introduction with rhythmic flexibility, taking full advantage of the diminished chords to create a haunted landscape. The heroic rhythms of the first theme of the Sonata, the introspective second theme, and the surprising modulations of the development section were emphasized with a superb use of instrumental color.

Four Sonatas by Domenico Scarlatti were enlivened by a sure sense of Baroque style. Park performed the Sonata in D minor, K. 32 as an aria with ceremonial, lyrical qualities and an exquisite sense of rubato; the playful Sonata in A Major, K. 322 with great rhythmic drive and finely shaded articulations; the impetuous Sonata in D Major K. 178 with lively dance rhythms and rapid arpeggio figurations; and the Sonata K. 391 as an exuberant minuet.

The legendary Francisco Tárrega made transcriptions of Isaac Albéniz’s piano music, and his practice of performing Albéniz’s music established a tradition. Park performed Capricho Catalan with an exquisitely long melodic line spun over a gently rocking accompaniment and created a sense of timelessness and love of home that was far from today’s headlines of civil strife. Her interpretations of Cordoba and Sevilla were rich with evocations of traditional Spanish idioms. She was equally convincing in Federico Moreno Torroba’s Sonatina, where she brought out the Spanish folk music influence and expressive color, while making the underlying structure absolutely clear.

But it was Park’s  performances of the South American music that  was sublime.  Barrios Mangoré was one of the greatest virtuoso guitarist composers in history but fame and international success eluded him during his life. Born in Paraguay far from the centers of European culture, Barrios wrote music rich in romantic charm in the years 1912–1944.

An almost exact contemporary of Bartók and Stravinsky, his work was more reminiscent of Chopin. His Valses (Waltzes), Op. 8, composed in Paraguay in 1923, are worthy of the comparison. This is Barrios in a Viennese mood and Park created an atmosphere of enchantment and romance. Un Sueño en la Floresta (A Dream in the Forest) is Barrios’s programmatic description of the creation of the guitar by the gods of the indigenous South American Guarani people. Park’s musical telling of the story was masterful.

The concert finale was Alberto Ginastera’s Sonata,his only work written for guitar. The first movement, Esordio (Beginning) consists of a solemn prelude based on the open strings of the guitar followed by a song which was inspired by music of the indigenous Kecua people. It concludes with a short combination of the two ideas. Scherzo, the second movement, was described by Ginastera as “an interplay of shadow and light, of nocturnal and magical ambiance, of dynamic contrasts, distant dances, of surrealistic impressions.”. Park captured these mystic associations with eerie effectiveness. Canto (Chant), the third movement, is a rhythmically free exploration of the first movement themes written without bar lines. Park’s outstanding feel for improvisation and her reading of the audience allowed her to captivate the room with the haunting piece. Ginastera’s  rondo finale contains a complex interchange of strummed chords, struck strings, metallic colors, and percussion effects, and was a stunning conclusion, in Park’s interpretation.

The Omni Foundation supports young musicians in a variety of ways and opened this evenings concert with a performance by students from the Austin Classical Guitar Youth Orchestra, the Ruth Asawa San Francisco School of the Arts Guitar Orchestra, and students from the San Francisco Conservatory of Music Pre-College Chamber Music Program. The resultant ensemble of 32 teenage musicians gave beautiful and engaging performances of Verano Porteño by Astor Piazzolla and Ellis Island by Benjamin Verdery.

Segovia Tribute Is a Chance to Hear the Repertory He Popularized

From Haydn to contemporary Brazil, the two musicians were obviously simpatico.

In his first solo recital for the Omni Foundation, the guitarist took his audience on a journey of ardent emotional complexity.