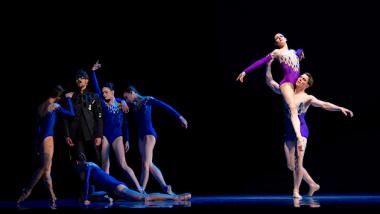 Yuri Possokhov’s new “... two united in a single soul ...” is an aesthetic mess. It had its world premiere Wednesday night on San Francisco Ballet’s mixed bill, which the company has titled “Lyric Voices.”

Almost nostalgically reminiscent of the worst of the Soviet-era Bolshoi ballets, where artistry was nightly sacrificed to the narcissism of the state, it featured the superb young countertenor Aryeh Nussbaum Cohen, the wonderful dancers Joseph Walsh, as Narcissus, and Yuan Yuan Tan and Sofiane Sylve, partnered by Aaron Robison and Luke Ingham respectively.

Where to start? Perhaps where resident choreographer Possokhov did, with those great basics, including the Narcissus legend and how perfectly the reflecting pond relates to the mirrors of the dance studio; Handel’s richest arias, and funds for décor (Ben Pierce), lighting (Jim French) and costumes (Christopher Read).

The ballet opened at the end of intermission, with a quote from Ovid on the painful duality of Narcissus as artist and human, blessed by the gods yet consigned to mortality, projected at the audience. A figure in black punkish attire appeared on set, with a black half-mask on his face, wearing a mic at his neck. He opened with a recitative from Handel’s Tolomeo. Confusion set in — were there technical difficulties? The mic picked up ambient noise, adding clicks and taps to the recitative. Next, Handel’s Rinaldo music, supplied by the ballet’s orchestra led by Martin West, was accompanied by an insistent and rising underbeat, as well as what sounded like high-hat cymbals. No, there were no crossed wires. Let Daria Novo, the “two united ...” composer “after George Frederic Handel,’’ have a moment: She integrated original Handel music “with electronics and my own music, so that it sounded interesting — and still like classical music.” Well, if she was after Handel, she brought him to his knees. Other Handel works included an aria from Giulio Cesare in Egitto and that wonderful allegro movement from the Concerto Grosso No. 6 in G minor, which survived more or less intact.

I’ve never found Handel to be uninteresting. On the other hand, that insistent drumbeat can send me to a different restaurant in a San Francisco minute. Lacking that option, your onlooker awaited the dancers as Cohen, singing from a podium beside a huge reflective silver ball, did what he could, with the vocal purity that made him winner of the prestigious Metropolitan Opera Auditions in 2017 and a fellowship at San Francisco Opera for the 2018–2019 season.

As Narcissus, Walsh, in a jeweled leotard, rests at a pond and stares at his reflection. He rises and tours the stage in graceful ecstasy, soon joined by couples Tan/Robison and Sylve/Ingham, also in jeweled leotards in deep purple. The women are lifted in generous, open poses and gorgeous head-over-heels somersaults, ending solid and high on their pointes. The fine corps of eight soloist couples arrives and eventually divides, dancing the same energetic ensemble phrases from the two sides of the stage. The mirroring metaphor extends later on, as Narcissus, in frustration, punches the silver ball, and the stage lights illuminate its reflection of the proscenium arch, eloquent testimony to the mirrors that haunt the artist, as well as the audience’s reflections, physical and mental. There are some interesting passages for the men that include tidy little grapevine steps leading to huge, manly jumps, either in parody or tribute or both to Paul Taylor’s Aureole and his other Handel-inspired dances. Wherever he is, he might have loved it.

There was more, and it was hard to figure out, especially the moment when the countertenor yanked off that weird mask and hurled it into the wings. Was that in the libretto, or was Cohen simply fed up? He then presided at the passing of Narcissus, kneeling empathetically at his side in a rare moment that felt direct and true.

It would be negligent not to mention how enjoyable the first two ballets, which both premiered at last April’s Unbound Festival, were. Soloist Benjamin Freemantle, leading off in Trey McIntyre’s lovely Your Flesh Shall Be a Great Poem, is more than ready for a promotion to principal rank. He also danced in Christopher Wheeldon’s funny, fluent, and poignant take on our cellphone addiction, Bound To, partnering Dores André. Other superb performances came from — well, everyone. Martin West conducted.

No Sleeping Through This Beauty

S.F. Ballet’s The Sleeping Beauty shows the company at the top of its world-class form.

S.F. Ballet Makes the Time and the Space for Artistry

Cathy Marston’s Snowblind is the dramatic highlight in a splendid evening of dance and music.