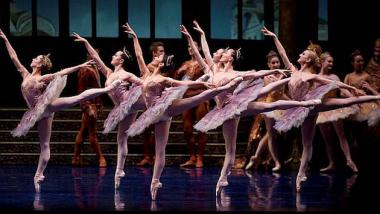 No Sleeping Through This Beauty

The Sleeping Beauty, playing this week at San Francisco Ballet, adds neatly to the company’s burgeoning credentials for all-round great dance. This season’s mix of full-length classical story ballets (Don Quixote, Beauty, and yet to come, The Little Mermaid), and mixed bills of newer and favorite older neoclassical pieces is worthy of huzzahs, and then some.

The Sleeping Beauty, seen last Sunday afternoon at the War Memorial Opera House, had it all going on: Peter Ilyich Tchaikovsky; Marius Petipa’s 1890 choreography for the Mariinsky Ballet, revived and revised for San Francisco Ballet for the 1990 centenary by Artistic Director Helgi Tomasson, coaching by Lola de Avila and Larisa Lezhnina; and Jens-Jacob Worsaae’s delightfully opulent, stirringly gorgeous costume and scenic design. And the best for last: a fantastic company, dancing their souls, soles, hearts, and everything out. “What are you saving it for?” George Balanchine would chide. These dancers could have answered, “absolutely nothing.”

You know the “Sleeping Beauty” fairytale, or you read it as thoughtfully retold in the program. At the christening, the Fairy of Darkness casts an evil spell on baby Princess Aurora. When she comes of age to marry, she will prick her finger on a spindle and fall into a deep sleep. The Fairy of Darkness wanted to kill her, but was overruled by the kind, beautiful, and gentle Lilac Fairy: Princess Aurora, and the rest of the kingdom, will sleep for 100 years, until she is awakened by a kiss from a handsome prince.

Mathilde Froustey was a brilliant Princess Aurora. Your scribe has been privileged to watch many fabled Auroras (Aurorae?) over a period of — let’s just say a long time — and Froustey’s became my absolute favorite in just one performance. She captured Princess Aurora’s dynamics, moving among speeds and and temperaments with exquisitely calibrated naturalness, unflagging precision, and energy. Her passion, grace, and classicism seem inborn. In short, she displayed total mastery of one of the longest, most demanding, and breathtaking roles in the canon. Her performance in the Rose Adagio, balancing easily and endlessly on pointe in turns in arabesque as one-by-one, four suitor princes present her with pink roses, was perfect. Too, Froustey ably sustained the charm of Aurora’s personality, one of the adagio’s most difficult demands. But Aurora has many solos, many allegros and adagios, and these she sailed through, perfection of form and character surrounding her every move.

Her Prince Desiré, Vitor Luiz, is a superb danseur, whether in his ruminative solo in the Vision scene before the Lilac Fairy (lovely WanTing Zhao, of the beautifully expressive arms) leads him to Aurora’s bedside, where he awakens her and pledges his troth, or soaring through the Wedding scene with impeccably rounded circles of grands jetés, not to mention a generous and attentive nature in all their pas des deux.

The soloists were particularly varied and delightful. Part of the fun is provided by the challenging choreography; the nuance and the nerve come from the dancers themselves, beginning with the Prologue’s deluge of spiritual gifts for Aurora from the Fairies: Tenderness, Generosity, Serenity, Playfulness, and Courage, danced beautifully, respectively by Elizabeth Mateer, Madison Keesler, Isabella De Vivo, Jasmine Jimison, and Ellen Rose Hummel.

As the Fairy of Darkness, principal dancer Jennifer Stahl added another notch to her gift for character dancing, managing to look scary/evil everywhere at once. The costume, which looks like a spider web through which one dances like crazy, helped a lot. But Stahl is also blessed with a lovely glower, and she used it to perfection. Her attendants, three crows, helped, jouncing evilly on their birdy haunches.

A special mention to Jimison, an apprentice and, like most of the company, a San Francisco Ballet School alum. In addition to her Fairy of Playfulness, in the Act III Wedding celebration she was a fine Enchanted Princess (partner to Esteban Hernandez’s outstanding, highflying Bluebird). She dances with strength and precision, but also with a sparkling smile, charming the audience. Charm abounded too in the White Cat/Puss in Boots pas de deux, where Thamires Chuvas and Alexander Reneff-Olson had a fine time encouraging and chastising each other’s woo-fulness; playful, perfect puddytats.

Add to that the joyful corps of women, waltzing with floral half-hoops in the Garland Dance, further enhanced by six young San Francisco Ballet School students. In the Vision scene, the 18 nymphs danced in the twilight as one. Watching the ensemble is a chance to admire the confidence and unity of the corps de ballet, and how in larger groups, corps and soloists generously share the stage, enhancing each other’s performances.

Performances through March 16. Details and tickets at the S.F. Ballet website.

S.F. Ballet Makes the Time and the Space for Artistry

Cathy Marston’s Snowblind is the dramatic highlight in a splendid evening of dance and music.

The durable company production is infused with some new blood, and a deep supporting cast.