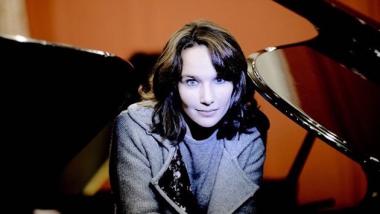 Hélène Grimaud and the S.F. Symphony Try a Little Tenderness With Beethoven

James Gaffigan, who was associate conductor of the San Francisco Symphony a decade ago, returned to Davies Symphony Hall last week to lead his old outfit in a potpourri of a program. I heard Friday’s performance.

The concert began with two gentle and reserved works by the most titanically aggressive composers in the repertoire — Beethoven and Wagner — and it concluded with some of the more dramatic utterances of two composers known for more dulcet tones — Mozart and Samuel Barber.

The Beethoven piece was his Piano Concerto No. 4, with Hélène Grimaud as soloist. The Andante of this work is supposed to be a dialogue in which a soothing piano tames a gruff orchestra, but this performance became a competitive exercise in dueling sweetness. Gaffigan didn’t go for the gruff, trying to negate it instead. But no matter how light and crisp the orchestra’s chords became under his direction, Grimaud, with Beethoven’s encouragement, easily outdid him with the softest and most tender pianissimos imaginable. It was so quiet that every ambient sound in the hall was audible.

In the faster, but not much louder, outer movements, the orchestra’s gentility was more evenly matched by a bright and frisky accompaniment by Grimaud, with trills coming out with the surety and regularity of pressing a buzzer.

The concerto was preceded by a 10-minute chunk of the Good Friday music from Wagner’s Parsifal. Though a couple of fortes occur in this stretch, overall it’s so calm and peaceful it makes the Siegfried Idyll seem dramatic by comparison.

Not all of Mozart’s symphonies are loud and declamatory, but he was a canny audience-pleaser and knew that listeners in Paris favored works with big tuttis and lots of timpani, so in 1778 he wrote his Symphony No. 31 in D for them to that specification. Again, Gaffigan preferred to take this in a sprightly fashion. With piping and crackling winds and whipping key changes, this heavy piece became almost frothy. Of the two competing Andante movements for this symphony, Gaffigan chose the one in 6/8, holding to Alan Tyson’s view that it’s the second version, the one that pleased the Parisians more.

Barber’s best-known music is typically either melancholy and wistful or lively and chipper. When he wrote his Symphony No. 1 in 1935–36, however, he decided it should be tough and muscular. It’s in one movement, and takes an ingenious form by which the various themes of the opening exposition recur as the principal themes of succeeding sections which take the place of other movements in a multimovement work.

It’s not always easy for listeners to follow this form because the angular muscularity of the themes keeps them from being very tuneful. The material is, at least, active and colorful, and this performance shone in those aspects. Gaffigan declined to dial down the heft of the music this time, treating this rather small-scale work as the large climax of the program. The climaxes at the ends of the sections were powerful and abrupt.

Barber’s symphony is a major statement in 20th-century American music, worthy to stand with similarly bold symphonies by his slightly older contemporaries Aaron Copland and Roy Harris. It was a surprise to read in the program that the Barber has been played by S.F. Symphony only once before, in 1963 under Howard Mitchell, then music director of the National Symphony in Washington.

On the Bench: Hélène Grimaud

The “formidable” pianist sits down to talk about her music, her advocacy, and her upcoming performances in S.F. with the Rotterdam Philhamonic and Yannick Nezet-Seguin.

Hélène Grimaud’s new solo disc Resonances comprises the recital program she has been touring this past season. It is a welcome change to find a pianist willing to risk the juxtaposition of Mozart and Berg.

The close connection between violinist and conductor made for an electrifying concerto performance.