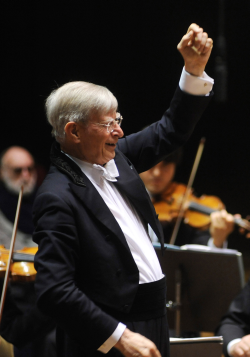 The second week of Conductor Laureate Herbert Blomstedt’s annual two-week visit to lead the San Francisco Symphony began on Wednesday at Davies Symphony Hall. The program was simple: two composers Blomstedt specializes in, Ludwig van Beethoven and Carl Nielsen, presented in rather atypical large works. The irascible, pounding Beethoven was represented by his gentle, melodic Violin Concerto, and the bounding, optimistic Nielsen by his tortured and erratic Fifth Symphony.

Alhough Blomstedt is often a great conductor, he has a characteristic failure mode, one usually inflicted on more energetic works than the Violin Concerto, this week’s victim. Sometimes his performances start out like gangbusters, and then the energy slowly leaks out over the course of the work, until the intended electric ending lies limp on the floor. It would have been incongruous to charge through this placid concerto at top speed, siren on and lights flashing, as Blomstedt did last week in Beethoven’s “Eroica” Symphony — a successful, if one-sided, interpretation. Instead, he began the concerto in a grand and stately manner, bringing heaviness to the music, which only emphasized by contrast how little passion came to the Larghetto or vivacity to the finale. Although the music had never been lively, the energy nevertheless leaked away.

Hadelich gave a pleasantly lyrical account of the Larghetto. Yet he absolutely refused to turn introspective, or to play in a darker or grittier tone, even in spots where Beethoven might have invited it. This may have contributed to the impression of dullness. He showed he was capable of audience-pleasing indulgence, digging into his strings and producing eerie tones, in a virtuoso show-off performance of his encore, the Paganini 24th Caprice, which came off as merely affected.

Nielsen’s Fifth Symphony, which rounded out the program, was completed in 1922. It’s a remarkable and dramatically gripping work. The music, if not its composer, appears to be suffering from postwar traumatic stress syndrome or some other form of psychiatric disorder. Typically Nielsenian moments of bouncy energy show up from time to time, only to be drowned by various dire events. World War I breaks out in the middle of the first movement, in the form of a violent percussion tattoo, part of it directed to be improvised. Elsewhere in the work, sections of the orchestra get into fierce arguments with each other over what music they are to play and which key it will be in. The plot eventually calms down after two successive fugues in the strings (other instruments join in later) — the first jagged and futile, the second gentle and productive. The music settles into E-flat major, the last available key that didn’t have something traumatic associated with it earlier in the symphony, and ends in a blaze of sunlight.

Or so it’s supposed to. In Blomstedt’s interpretation, though the energy stayed high, the ending came across as so harsh and questing, with honking brass, that, even after the final shining chord, the audience wasn’t sure if the piece was over. The first few seconds of applause sounded quizzical, as if the applauders weren’t sure they were not acting out of turn.

The applause should rightly have gone ahead with vigor. The musicians deserved it. The strings, in a thin and brittle tone appropriate for the cold beauty of much of their parts, traded low growls with piping winds and matched high D’s unerringly with Robin Sutherland’s celesta. The horns, though they had occasional problems in loud passages, produced that rare sound, a true pianissimo, in their opening entry in the first movement. Stunningly fine playing came from the winds, especially in some long solos for Carey Bell’s clarinet, and also Tim Day’s flute. And there was plenty of solid work from the back of the stage, from timpanist Jeremy Epp and the hard-working percussion section headed by James Lee Wyatt.

In brief, Blomstedt did not give a sufficient electric charge to his Beethoven this week, a problem reinforced by a naturally undemonstrative soloist, and he overcharged his Nielsen. A happy medium would have made a promising concert excellent.