If Hilary Hahn were an Olympic athlete, she’d climb the podium as a decathlon medalist. A phenom who made her solo debut with the Baltimore Symphony at age 11, the American violinist, now 41, is as celebrated for her mastery of Bach as she is for her advocacy for contemporary music. Her lush tone and commanding technique are just as much at home in the Romantic repertoire.

In one particularly noteworthy feat, Hahn turned her attention to the encore, often a sideshow devoted to musical chestnuts, assorted oddities, and flashy effects. For her 2013 album In 27 Pieces: The Hillary Hahn Encores, she commissioned 26 composers to write new concert-bonus pieces for the violin. (The 27th encore came from the winner of a competition.) Hahn toured extensively for the project, using her own chops and personal panache to ensure that these encores would get the best possible chance to gain footholds in the wider musical world. 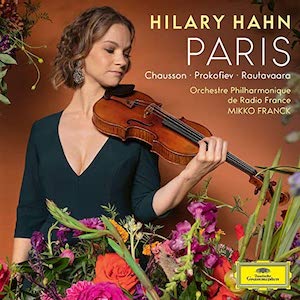 In her new Deutsche Grammophon recording, Paris, Hahn teams up with the Orchestre Philharmonique de Radio France in a program of Chausson (who was French), Prokofiev (Russian), and Einojuhani Rautavaara (Finnish). So what are the latter two doing on a bill devoted, at least by title, to the City of Light?

There are explanations, somewhat arbitrary as they may be. The Prokofiev work on the program, his Violin Concerto No. 1, premiered in Paris in 1923. Rautavaara’s Deux Sérénades was commissioned for this world premiere by the Orchestre Philharmonique’s music director and the composer’s fellow Finn, Mikko Franck.

More importantly, Paris is meant to convey the expansive international breadth of that city’s musical culture. No ambassador is better equipped to convey that message than Hahn, who delivers performances filled with emotional precision and range, musical discernment, and technical finesse — the reliable assets of an artist playing at the top of her game. The ensemble, with Franck on the podium, partners with her beautifully.

In an exuberant, positively theatrical account of the album’s centerpiece, Hahn and the orchestra make Prokofiev’s sparkling first violin concerto the main attraction. It begins, in the initially languid first movement, with the soloist’s innocently demure entrance to cavort playfully with the woodwinds. While things turn rhapsodic and even hectic later on, that early sense of calm and self-possessed equipoise remains.

Whatever she’s called on to do, from register-spanning sprints to a jaunty folk melody launched over a pulsing orchestral ostinato to giddy fiddle strumming, Hahn never seems to be taxing herself or her listeners. Great athletes, it’s often said, slow their sport down and make it come to them. Hahn exudes that kind of patient, graceful control. It all comes off with an air of limber spontaneity.

A short Scherzo, reminiscent of the composer’s Romeo and Juliet ballet score, conjures up assorted grin-inducing dance steps here. The ensemble teeters around on pianissimo tippy toes. A kind of folk dance breaks out, complete with tambourine. Hahn’s endlessly colorful tone goes raw and guttural near the end, like a dancer exhausted on her fleet exit into the wings.

There’s plenty left in the tank for a delightful final movement. Hahn does some of her most vivid playing here. There’s something buoyant, almost weightless about her phrasing, like a high-wire walker. She bounces on her strings a little, then goes into a kind of woozy sway, her choice double-stops creating the sense that there might be two of her up there on a dare. This brilliantly realized piece ends with a wistful chromatic exchange between orchestra and soloist, as if they can’t quite bear for it all to end.

By turns voluptuous and brusque, mournful and feverish, Chausson’s well-known 1896 Poème has the amplitude of a symphony in a single movement. Franck and the orchestra lay down a rich, loamy tone, the ground for Chausson’s organic, blooming inventions, now dreamily lyrical, now brightly focused. Hahn lavishes long, unbroken lines, those split-personality double-stops, and whirring trills to great effect. One especially high trill is a like a distant bird call, summoning the work to its placid tonic-chord close.

Rautavaara’s two serenades, one “pour mon amour” (for my love) and the other “pour la vie” (for life), are the weak links in this Paris chain. The one dedicated to “life” is the better of the two, more various and eventful. But both suffer from a lack of musical purpose. They’re all atmosphere, vaguely Grieg-like in spots and more like plush movie music in others, without a clear ambition. The performances are sensitive, but there’s not enough substance to work with.

It’s in the Prokofiev especially and the Chausson as well that Hahn and the orchestra soar over the high bar.

The violinist captures a quiet moment to reflect on her swirling world of sound, image, and nonstop creativity.

Play it again, Hilary Hahn: and she does, in a recital populated by encores from a myriad of composers.