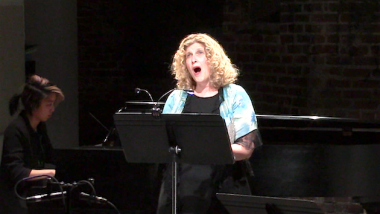 Ensemble for These Times whizzed through a marathon of miniatures on Saturday at the Center for New Music. Of the 12 works, though, only a few made a strong impression.

My favorites were the three selections from Nach Raum und Zeit by Derek Jenkins. The texts, all German, span from the 14th to the 19th centuries, yet each movement shares a character that’s both sumptuous and fraught. Chromatic clusters are suspended in “A dream,” whose harmonies recall early serialism yet are occasionally novel in their own way. “Spring’s faith,” whose text is warming in a setting by Schubert, here assumes an incongruously alarmist tone — one that’s decidedly current. E4TT’s soprano Nanette McGuinness effectively channeled this nervous energy, and guest pianist Taylor Chan beautifully shaped the late-Romantic harmonies.

Jenkins (who teaches at Arkansas State University) submitted the work to E4TT through their Call for Scores. Another highlight among the featured submissions was Eu urmo comigo (I sleep with myself) by Carlos dos Santos. Almost as soon as the gently chromatic harmonies grow ambiguous, they’re tempered by impressionist figurations. It’s almost disappointing, but then the text, by Angelica Freitas, is unambiguously feel-good: it’s a celebration of singledom.

A few other miniatures hit the mark. Dan Senn’s song “The Never Close,” at first luxuriously expansive, breaks without warning into jangling syncopations and percussive effects. It’s jarring in a good way. “Paper Money” by Scott Etan Feiner (a student at Yale) has the pacing of an engaging recitative and the vibrancy of jazz.

Both of these songs, among several others on the program, were performed with conviction by Chan and guest soprano Chelsea Hollow, who gave better performances of the works than some of them deserved.

Most out-of-place in this century was Prelude Variations by Elena Ruehr. The instrumental duo mixes Baroque figuration with rhythms and harmonies of Brahms — but the piece isn’t in on its own borrowing. It’s ungainly and sounds like nothing.

Several of the songs weren’t better. Works like Jerry Casey’s Anna’s Song — a kind of hobbyist’s oratorio — weren’t just derivative; they were disappointing, when the concert’s branding framed the music as current — at the Center for New Music, by the Ensemble for These Times.

Hearing new scores, I want to encounter new ideas. Certainly, plenty of opera companies in the Bay Area regularly program vocal music that’s thought-provoking — in theme (Laura Kaminsky’s As One), music (George Lewis’s Afterword), format (Linda Bouchard’s The House of Words), or, when we’re lucky, all three (Ana Sokolovic’s Svadba-Wedding). These are, of course, comparatively high-budget productions. But still, the choral ensemble Volti frequently sings interesting scores that truly sound new. And any singer could, I’m sure, quickly come up with many more examples of risk-taking vocal music achievable at any scale. Yet I hear an awful lot of purportedly new art song that just doesn’t seem relevant.

Again, it’s partly a matter of framing. In his Missed Connections, Sam Krahn sets texts from Craiglist’s Casual Encounters section (R.I.P.). You can’t make this stuff up, and Krahn’s music, full of tongue-in-cheek references, would be perfect for a cabaret. I’d go to that show.