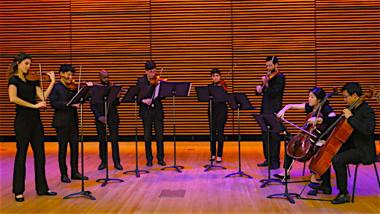 The limits of string playing were tested on Saturday night at Pasadena City College’s Westerbeck Recital Hall. In an evening of four pieces including a world premiere and a U.S. premiere, the 22 string players of Kaleidoscope Chamber Orchestra delivered an athletic performance. Three contemporary works were performed alongside Béla Bartók’s 1939 Divertimento, and inventive approaches to using traditional string instruments were on vivid display.

Kaija Saariaho’s Sept Papillons explored the outer ranges of cello technique. The solo piece prominently featured the use of harmonics — notes in which the string is partially held down, allowing only certain overtones to vibrate in the air, producing a transparent and ethereal sound. Cellist Juliette Herlin carried these out with technical accuracy while still bringing impressive artistry to the piece. She held the audience’s attention — no small feat for a piece that highlighted the grit and dissonance inherent in the extremes of extended cello technique.

Composer Chiayu Hsu’s Taiwan Miniatures received a strong U.S. premiere by eight of Kaleidoscope’s players. Rapid and dissonant passages of intensely high violins gave way to undulating waves of sound, and the musicians of Kaleidoscope were adept at navigating these sudden changes in tone. They played with admirable cohesion.

Cellist Stella Cho was featured prominently in a solo moment, allowing the piece’s first strands of melody to burst forth. Her tone was warm and her phrasing gave shape to a work that at times felt listless.

Kaleidoscope’s full ensemble delivered the world premiere of Gabriella Smith’s Hexacorallia. As the composer explained in a preconcert talk, she drew inspiration from recordings she made with a hydrophone — a microphone for underwater use — while in French Polynesia. Hexacorallia attempted to render these sounds in orchestral form.

All uses of the instruments were fair game in Smith’s portrait of the ocean. For an entire passage, cellists struck their instruments with their hands, transforming the cellos into drums. Moments such as these were heightened by juxtaposition when the score quickly shifted towards baroque music, in a style heavily influenced by 18th-century composer Antonio Vivaldi. Smith’s bright orchestration rang out in powerful chords between all players.

The ensemble often appeared split down the middle. Violins and violas seemingly approximated the sounds of small fish while the cellos and basses drew long chords, like the sound of the ocean itself. Kaleidoscope performs without a conductor, and violinist Alex Granger cued the orchestra with clarity and energy.

Smith explained before the performance that she recorded various strands of music on her violin and layered them over each other, before transcribing them for the orchestra. This layering added a sonic realism in its representation of the complicated and unpredictable sounds beneath the surface.

The program culminated with Bartók’s Divertimento, and Kaleidoscope didn’t disappoint. The ensemble played with a rhythmic tightness — a testament to Bartók’s vivid orchestration that allows the orchestra to ring out in unison on many of its melodies. While the program’s other pieces explored many forms of alternative techniques, this work probed the ranges of orchestral color. Kaleidoscope gave a muscular account of Bartók’s masterwork and they showcased their wide emotional palette. The final movement’s call-and-response theme between violins was a thrilling conclusion to an evening of strong playing.

If a commonality could be seen between the four works, it was the physicality that each piece summoned from the orchestra. Kaleidoscope’s musicians often move independently of each other, finding their personal rhythms within the music. It was as thrilling visually as it was acoustically. This style of playing was well-suited to the acoustics of Westerbeck Recital Hall, and the audience (which was on the younger side) fed off of the physical energy in the room.