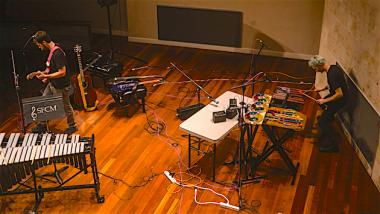 The little kids in the front rows of the Sol Joseph Recital Hall were a surprise to me as I walked in on session three of the student-run Hot Air Music Festival at the San Francisco Conservatory of Music. Well-behaved as they were, they were obviously excited, not recalcitrant like my 5-year-old self looking dubiously at a plate of greens.

They were there to see The Living Earth Show, a guitar-percussion duo whose percussion half, Andy Meyerson, was a co-founder of the first Hot Air Festival 10 years ago. SFCV was there to cover that show, and the good news is that the latest edition of the festival is true to the spirit of the first one: an all-day marathon of new music, where every style is represented and welcome, and that brings out the child in everyone.

Hot Air is only partially curated (which implies choosing themes and artists); it’s more like an artful arrangement of various performances. Faculty and veteran artists play alongside the Conservatory’s bright young things, and the festival incorporates both masterworks and brand-new student compositions.

The Living Earth Show (Meyerson and guitarist Travis Andrews, also an SFCM alum) is dedicated to unusual, ear-opening collaborations with experimental-minded composers. They’re also gearheads: Andrews brought along five electric guitars (including a pink Hello Kitty one) and Meyerson’s percussion instruments included boxes filled with jello that sounded like toms when amplified. “We had an argument this morning,” Andrews deadpanned. “We were like, ‘We don’t really want to bring the sink.’ — We brought the sink.” Not the proverbial kitchen sink, but an actual one.

Their three excerpts from a commissioning project called “American Music” began with “Family Sing-A-Long and Game Night” (2015), by Canadian Nicole Lizée. This short piece is actually “Michael Row Your Boat Ashore,” which is interrupted by a prolonged “glitch” in every iteration that is meant to sound like a CD getting hung up. It was cute and the kids ate it up.

The duo performs with such show-biz panache that it’s easy to overlook their superior musicianship. Every piece is memorized, and every piece is performed with energy and visible enthusiasm. They make everything they do fun. The other pieces in their set were a prelude and fugue by Dennis Aman based on a quarter tone scale, featuring percussion he had invented, and Sahba Aminikia’s incredibly virtuosic Torkaman, an arrangement of an improvisation by Persian musician Hossein Alizâdeh.

These unassuming pieces led up to the “how do you know you don’t like it if you won’t try it” masterwork of the afternoon, Gérard Grisey’s sextet Vortex Temporum, performed with evident enthusiasm and plenty of skill by Matthew Cmiel’s After Everything Ensemble. This 40-minute summation of Grisey’s craft is as rigorous as anything Pierre Boulez ever wrote (and there are plenty of dissertations and scholarly articles on this 1992 piece to back up that assertion). But it is also ghostly and delicate, arrestingly violent in the piano solo that ends the first movement (expertly played by Kate Campbell, banged-out cluster chords and all) and expansive in its exploration of timbres, microtones, and time and its use of silence and near silence. Unlike Boulez, you’re not focusing on the pitch structures (thank goodness) but on the drama of extremes in the music.

The “time vortex” that Grisey creates is perceptual, our personal hearing of sounds drawn out or condensed, so that our frame of reference is constantly changing. Thus, the first movement commences with arpeggios foregrounded in the flute and clarinet, while the piano, note by note, sounds a flute melody from Ravel’s Daphnis et Chloé, something you would probably need to be told, rather than hear. In essence, we’re diving down into the sound world of each note of that melody. And that volcanic piano solo at the end of the movement is a condensation into simultaneities of the movement’s material. It’s meant as a jolt, from a kind of galactic timescale down to the world of mayflies.

Long before the piece, started, the children had wisely been withdrawn, but Grisey’s wonder at the universe of sounds that we usually pass over remained.

The homegrown festival of the San Francisco Conservatory of Music, hosts a preview concert at Center for New Music.

The 5-year-old Hot Air Music Festival’s burgeoning abundance was evident in all the music on tap; old and young alike experiencing the unrivaled charge of new music heard live.

Hot Air Music Festival: Up, Up, and Away

San Francisco Conservatory is about to set loose its annual Hot Air Music Festival, which offers something for everyone — plus it’s all free and high-flying!