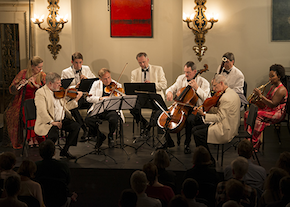 To Impart the Art of the Fugue

Occasionally a chamber music recital will begin with a work by Bach titled “Contrapunctus” with a number. That designation means it’s a selection from The Art of Fugue, Bach’s final summation of the counterpoint music he’d practiced all his life. Usually it’s listened to with baffled respect and then ignored.

What there isn’t much of a chance to hear — until [email protected]’s Tuesday concert, repeated on Wednesday — is the entire Art of Fugue. It’s understandable that this would scare people off. It’s the most abstract, academic, purely theoretical masterpiece in all of classical music.

Menlo’s organizers did not expect it to be popular (both performances were in the tiny Stent Family Hall) and they presented all of it: 14 fugues, two of them played also in “mirror” inverted form, four canons, and the polyphonic chorale that C.P.E. Bach selected from his father’s last works to conclude the set when it was published. The music took about 85 minutes, not counting intermission or a 15-minute opening talk by guest lecturer Michael Parloff to ease the audience into what they’d be hearing.

Start with the arrangement. Bach designated no particular instruments on his manuscript. It’s possible to play The Art of Fugue on a keyboard, and many performers do. The problem, though, as Parloff pointed out, is that the unchanging tone color can become monotonous in a long work that’s all in one key and based on one theme. Counterpoint is polyphony: It consists of a set of independent lines of equal importance. So why not have a variety of instruments play these different lines, and change the choices frequently?

That is what flutist Samuel Baron did in arranging The Art of Fugue for an ensemble of nine instruments — the four strings of a string quartet, and five winds; flute doubling piccolo, oboe doubling English horn, clarinet, bassoon, and French horn. Some of the pieces are just for strings and some just for winds, but most are for mixed consort. Sometimes he uses all nine players, and sometimes as few as two or three. It puts a tasty variety into the sound, and brings out both the individual lines and the variety of techniques that Bach uses. When the strings are playing a fugue based on the main theme, and the winds are playing the same theme augmented so that it’s half the speed, it’s easy to hear Bach’s technique.

Then go to the performers. The string parts were played by the Orion Quartet, as serious and earnestly dedicated an ensemble as they come. First violinist Daniel Phillips briefly introduced the individual pieces to point out their distinct techniques. Second violin Todd Phillips, cellist Timothy Eddy, and violist Steven Tenenbom joined him in clarity of line.

The string parts were played by the Orion Quartet, as serious and earnestly dedicated an ensemble as they come.

The winds, seated in a semicircle behind the strings, were a collection of notable performers, some, like the Orion Quartet, imported to Menlo just for this concert. Flutist Tara Helen O’Connor is a distinguished soloist and chamber music player. Oboeist James Austin Smith often plays with the Orpheus Chamber Orchestra, of which clarinetist Alan Kay is a member. Bassoonist Marc Goldberg is a member of the American Symphony Orchestra, and horn player Nicole Cash is associate principal with the San Francisco Symphony. They all played like the top professionals they are. Keeping the winds’ volume down in a tiny hall can be challenging, especially the horn. This was not a problem for these players, particularly Cash, whose sound was dulcet.

Bach begins with simple, basic fugues and gets more complex. The more complex he gets, the better and more enjoyable this performance became. It really hit its stride with Contrapunctus 8, which Baron arranges for string trio, and Contrapunctus 9, one in which he sets strings against winds. The musicians brought charm as well as flow and direction to Bach’s creativity with finessed varying of the tempo and dynamics.

Baron’s arrangements were also charming. Sometimes, when he put multiple instruments on the same fugal voice, the harmonically resonant sound evoked Leopold Stokowski’s Bach orchestrations. At other times, with many instruments of varying color going different directions in rhythmically intricate ways, the atmosphere resembled that of Copland’s Appalachian Spring. When they all came together for a chord, there was a hint of the flavor of student concert band music.

Each piece brought something new, each was as interesting as the last, and when the final chorale brought the performance to a close, it gave the rich, satisfying feeling of concluding a lucid traversal through one of Bach’s largest and most coherently organized musical structures.