More an effervescent scrapbook than a stolid autobiography, Blood, Sweat, and Tours, by concert pianist and educator Rami Bar-Niv, also serves as a guide to preparing and maintaining a music career and a study in the impact of that career on everyday domestic life. 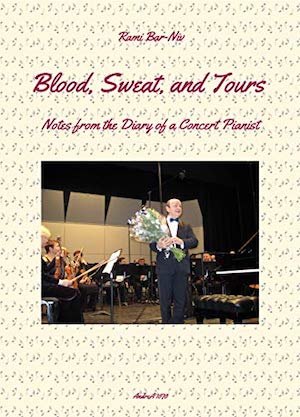 The 75-year-old Bar-Niv, born and still based in Israel, has regularly toured five continents as a soloist, recitalist, and chamber musician. His original compositions showcase his interests in Israeli and Jewish folk and liturgical music, as well as American ragtime, with nods to classical and improvisational new music. Some of this work is available in CD format through his own label, AndreA. His catalogue with CBS-Israel includes the first and one of very few complete recordings of Bach’s Notebook for Anna Magdalena Bach, and compositions by George Gershwin.

Performing on video and in person (I saw him at the Forte House in San Francisco, one of the regular sites of the popular piano camps he holds here and in upstate New York), Bar-Niv’s approach to the keyboard is confident and elegant, but lively, and alluringly phrased. Although his mother began teaching him piano at age 5, this is only his second book; his first was The Art of Piano Fingering: Traditional, Advanced, and Innovative, self-published in 2012 and available through Amazon and in five languages. What Blood, Sweat, and Tours shares with its author’s performance style is a contagious open friendliness and manifest love of expression. The book’s naivety, a contrast with the pianist’s sophistication, ultimately works to good effect on readers ready to accept it for its revelations and insights.

These include an impressive account of music as an enduring family value. Bar-Niv’s European Jewish parents emigrated to Israel under the impending threat of the Holocaust, and fell in love playing piano-and-violin duets in a café in Tel Aviv. Young Rami and his older brother Yair trained on those two instruments, respectively.

In the next generation, both brothers passed the music on to their offspring, and as his younger son Tal advanced in his studies of trumpet (he’s currently the principal in Israel Sinfonietta Be’er Sheva), Bar-Niv took time to accompany exams, competitions, and concerts. He currently tends to the instruction of his grandchildren, who he’s connected with lantzman Itzhak Perlman’s camps. His memories and continuing acknowledgment of all this genetically lined music-making are illustrated in the scores of informal photographs interpolated in the text, rather than collected in a particular section of the book.

“I can say with no hesitation that I had a very happy and fulfilling childhood,” states Bar-Niv. His happiness is at times invested in rather long and detailed accounts of events like Purim parties, which may outstay some readers’ patience, though their value to the author is undeniable. More engaging is his declaration that, “from age 14 to 21, I had quite a number of girlfriends,” followed by photos of three of that number, and a note that, “there were also various other shorter encounters with girls that I don’t exactly remember.”

As an arguable precursor to his own pedagogical method, Bar-Niv notes that, “I loved to play the piano, just not to do any serious practicing.” He started accompanying dance classes at age 12, and at 14 began private lessons with Israeli composer Paul Ben-Haim. In two rather than the normal four years, Bar-Niv completed study at Tel Aviv’s Academy of Music, where he’s pictured performing for a visiting Leonard Bernstein.

Offered a scholarship on a recommendation from Nadia Resinberg, whose master class he’d attended in Jerusalem, Bar-Niv enrolled at Mannes School of Music in New York City, where his fellow students included Murray Perahia and Frederica von Stade. His accounts of pianistic techniques acquired, concerts attended, and “girls” dated glisten with the enthusiasm of youth, though again there are details — lists of Jewish actors and musicians he met in summer camp — which extend beyond the ken of most readers. A more significant detail is Andi, daughter of the camp’s director, who became and still is Bar-Niv’s wife.

Starting with 1970, many of the book’s chapters are a condensed chronological diary of individual years, many of which involve trips to and from Israel, with the admittedly “workaholic” author miraculously balancing musical enterprise with a growing family and obligatory service in the Israeli army. With what he terms “sabra chutzpah,” using the term for an Israeli-born Jew, Bar-Niv sells his albums at concerts from a suitcase, and claims he “never took no for an answer.” He also notes that “I did my own PR, managing and promoting my concert career,” and “I was also the producer and promoter of festivals, concert series, and records.”

Interestingly, he counts his appearances for hometown audiences in Tel Aviv as among the most “serious.” The Iraqi bombing of the city in 1991, a couple of years after the birth of his daughter Sheli, added to the challenge, with Bar-Niv noting, “for over a year after this war was over, we were quite jumpy to any sound that resembled a siren, e.g., the beginning of [Gershwin’s] Rhapsody in Blue, with the clarinet glissando.”

Despite a bourgeoning international reputation, which at times surprises him, Bar-Niv emerges in the book as a devoted family man, facing such unforeseen challenges as his second son Tal’s diagnosis with leukemia, and his first son Shai’s death from myocarditis, at age 15. The account of sitting shiva for Shai — the Jewish tradition of week-long mourning — is one of the book’s most moving passages. He keeps his long-lived parents caring company during their last years, making sure his nonagenarian mother has a seat in his audiences.

A fuller portrait of the author’s personality is educed from his account of comedy as part of his stage presence, bolstered by a series of musician jokes. He also steps aside from his narrative with observations such as, “music is like a holy shrine, revolving eternally in space,” and “great music makes me cry ... makes me see God.”

As for the keyboard, Bar-Niv’s book provides chapters on concert preparation (“I don’t warm up with exercises — I warm up with the repertoire I’m about to play”), interpretation (“be precise on how long to keep keys down and when to let them go, and ‘play’ the rests like you play the notes”), technique (“the wrists draw imaginary vertical circles or ovals”), and reading (“start seeing shapes of chords and patterns of horizontal movements”). He imparts this at his piano camps at greater length in person, although J.J. Hollingsworth, a longtime Bar-Niv student and his San Francisco host, notes that she and many attending the camps are composers also seeking his attention to their original compositions.

The camp at Hollingsworth’s Forte House, planned for last month, has been postponed. Bar-Niv is sheltering in Tel Aviv, close by his adored and adoring extended family. “I am a terrible dresser when I don’t have to perform,” he writes, during a fact-checking email exchange. “I don’t mind wearing schmates [Yiddish for ‘rags’] at home.” His fans, including the 22,000 in his Facebook group, can message him online, and order his book on Amazon.

The Lost Pianos of Siberia Takes Readers on a Musical Adventure

Sophy Roberts uncovers a wealth of keyboard lore on her journey through the Russian outback in search of a piano.

Our intrepid reviewer recommends a shelfful of great reads about music and musicians culled from recent publications.