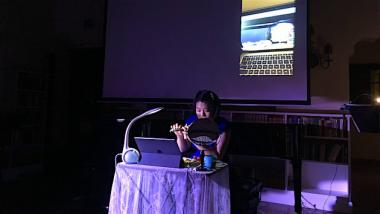 Flutist Shao-Wei Chou waved her bass flute in mock sadness and looked pleadingly to composer Davor Vincze, who was behind the small audience setting up the live electronics. She was trying to indicate that she was too close to the piano for comfort. Up scurried another composer, Mu-Xuan Lin, to help rearrange, but as she did the mic wailed with feedback. Lin hurriedly moved Chou’s setup even further into the corner. As Chou backed up to accommodate this change, she cracked a smile and said, “Actually, I will just leave,” turning to go out the doorway behind her. Grateful laughter erupted, and she waved “Bye!”

The evening’s performance, a program of four electro-acoustic works at the Villa Aurora up in the Pacific Palisades, was sprinkled with these kinds of lightly excused technical mishaps. Electro-acoustic concerts are always a bit of a rat’s nest of cables and mics and extension chords onstage, which is a forgivably stressful situation. (Shao-Wei had performed the same program at UC Berkeley on April 15.)

This little comedic moment with Chou was telling, though what had failed in the first piece she performed had nothing to do with the tech. That opener was Madame de Shaghai — a sort of tribute to the Orwell film of similar name, and a sensuous blending of electronics/flute/video/speech collage from 1997 by French composer Luc Ferrari. I enjoyed the texture of hearing Mandarin sliding in and out of French, I enjoyed the expressive, minimal video art by Yves-Vincent Davroux, but I did not enjoy watching Chou, off to the side, waiting for her next entrance.

To be fair, the piece was originally for flute trio, but it was so odd to hear her in an auxiliary role and be the only live element. As she competed with the recorded sound of the other two absent flutes, it seemed that the work would have come off more efficiently as a video with soundtrack. Even if I imagine a trio of flutes performing live, they would still feel like an extraneous live accompaniment. It’s a shame that Chou’s presence felt unnecessary.

Contrast that with her fireworks display of a performance in the next piece, a premiere by Davor Vincze titled Take your time…hurry-up! A series of nine miniatures, Vincze processed Chou’s playing live, meaning that he manipulated the sounds she produced in real time, ranging in effects from simple reverb and eerie chordal echoes high above, to clouds of flutes swarming her every move. Chou’s huge sound and stage presence felt like the fount from which the piece flowed. She was the catalyst. Her physicality, the massive force she exerted on the air through the giant bass flute, her tightening eyebrows as she wailed into the reverb and distortion, all made her presence necessary to the experience, necessary for us, the audience, to be there in person to see it.

Following these two works as its own kind of medium was Mu-Xuan Lin’s 2019 …à… for piccolo, electronics, and video. Chou, though not playing often, clearly played a role — largely sitting at a small, lace-covered table, looking into a propped-up iPad and surrounded by bedroom litter including a lamp and face mirror. Behind her, a video loomed showing bits of commuter life, home life, and travel life, but the audio was mismatched from scene to scene. The intentionality of everything was present and ghostly, but, unfortunately, I couldn’t connect the dots very well on my own, at least not without the program notes.

Genoël von Lilienstern’s Dom for amplified cello and live electronics, a premiere and commission of concert organizers People Inside Electronics (PIE), was heavy metal, and sounded like music for the actual Ragnarök — the great battle of Norse mythology. Ashley Walters ripped into her righteously distorted low register, and despite having to rescue her contact mic a few times, the snaking bass (with added octave below) and face-melting tremolos kept me zeroed in. For a piece centered on the dankest ranges of distortion and grit, I was having way too much fun.

Real-time creativity pushes listeners to stay in the moment at this big-hearted gathering of electronic explorers.