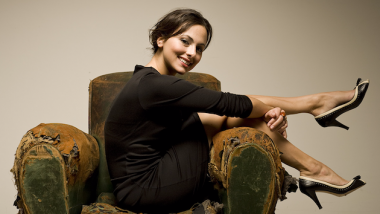 Isabel Leonard Makes the Most of Bernstein, Great and Small

Isabel Leonard is one big talent.

Tall and strikingly statuesque in a flowing black outfit with long dark hair cascading over her shoulders, the American mezzo-soprano strode onto the Herbst Theatre stage to open the San Francisco Performances season Sunday evening, October 1. Her voice, in an all-Leonard Bernstein recital, was every bit as arresting and then some. Powerful and uniformly assured from the lowest notes to the highest reaches, this formidable vocal instrument rolled out marble-smooth waves of lustrous, fine-grained sound.

An audience would be gratified to hear Leonard sing whatever struck her fancy. While the lesser selections on Sunday’s program may have made some members wish for a little Mozart, Handel, Ravel, or Strauss on the bill — the wide-ranging Leonard has sung them all — the singer made a sustained case for Bernstein’s variegated writing for the voice. She tossed off curiosities like the brief, nonsense-verse “Piccolo Serenata” with the same focus and intensity that she lavished on two stand-out selections from Trouble in Tahiti or a near-reverent reading of “Take Care of This House” from the composer’s ill-fated show, 1600 Pennsylvania Avenue.

Leonard affected a certain cabaret-style casualness, popping up on a stool from time to time, sprinkling on a little vocal patter and plopping down on the piano bench with her accompanist John Arida for an unorthodox encore. But this was a serious, take-no-prisoners recital, even with the singer parked behind her music stand all night, with apparently nothing on the program fully committed to memory.

Never mind. Leonard sang everything with an almost steely sense of purpose. She steamrolled over gender lines, taking on Tony’s love ballad “Maria” from West Side Story and the sailor Gabey’s “Lonely Town” from On the Town. Nobody batted an ear. Leonard’s powerhouse voice, seamless phrasing, and commanding presence made her seem equipped to handle anything.

That’s not to say that she sang it all equally well Sunday. “I Feel Pretty” felt a little operatically heavy, without the playful, slightly self-mocking tilt of that familiar West Side number. “So Pretty,” a 1968 antiwar song, was comparably ill-judged, coming off as at once ponderous and a little fatuous. Maybe the time-stamp on it was too apparent.

Any shortcomings were swept away when the evening reached its peak in back-to-back stunners after intermission.

First came Tahiti’s “There Is a Garden,” which delved deeper and deeper into an unhappy wife’s meditative dream. Every time Leonard arrived at the song’s simple motivic phrase, she invested it with a fresh, expansive ache of longing. It was touching, too, in this Bernstein centennial season, to hear the hushed phrase “a quiet place” in the lyrics. That’s the title — A Quiet Place — of the composer’s daring and underrated 1983 sequel to the 1951 Trouble in Tahiti. Leonard followed that up with “It Must Be So” from Candide, steeped in feeling shaped and molded into an impeccable, long-lined reading of that wise and wistful number.

Among Leonard’s many assets is her pellucid but never fussy diction. That figured materially in the narrative twists and turns of “What a Movie!” from Tahiti. Rhythmic feints, tricky intervals, a nasal inflection and some percussive figures all came into play. The singer’s command of language turned poignant in her quietly stirring “Take Care of This House.” It was impossible not to hear the present-day reverberations of this truly patriotic line about the residence at 1600 Pennsylvania: “This house is the home for us all.”

Arida was an admirable partner, assertive but never intrusive from the keyboard. While the evening had its share of standards, there were discoveries as well, including two numbers from Bernstein’s incidental music for an adaptation of Peter Pan, a brief fragment from Arias and Barcarolles (the full version of which Leonard and bass-baritone Ryan McKinney sang with such aplomb with the San Francisco Symphony last week), and the slight but amusing “My Twelve Tone Melody,” which the 12-tone-skeptic composer wrote on the occasion of Irving Berlin’s 100th birthday.

The evening ended in quirky fashion. Leonard reprised the evening’s opening number, “A Little Bit in Love,” as her first encore. Then she settled next to Arida to lead an acapella audience sing-along of “Somewhere,” the West Side Story tear-jerker. It was an odd but somehow fitting conclusion, as Leonard’s own remarkable voice soared above the game rumbling of the crowd.

The celebrated singer is in town this month for a program of Leonard Bernstein works with the S.F. Symphony.

For her San Francisco recital, a rising star, the mezzo-soprano Isabel Leonard, selects music that’s both personally meaningful and challenging.

With Isabel Leonard, Sound Is Supreme