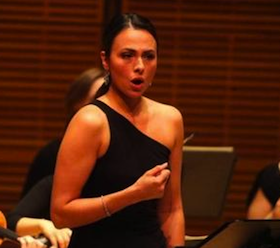 With Isabel Leonard, Sound Is Supreme

Close to six years and one child after her Metropolitan Opera debut in September 2007, mezzo-soprano Isabel Leonard, 31, returned to San Francisco looking as slim, fit, and beautiful as ever. For her Sunday afternoon recital, her second San Francisco Performances–sponsored appearance in the S.F. Conservatory of Music concert hall, Leonard and her accompanist, Metropolitan Opera and Lindemann Young Artist Development program pianist/coach Vlad Iftinca, presented a two-part, Spanish-English program that drew upon the mezzo’s Argentinian and American heritage.

Audience members who valued sheer beauty of sound above all were not disappointed. Others, however, were left feeling short-changed. For, as beautifully and smoothly as Leonard sang — her tone was admirably even and full in the midrange, and often thrilling on top — her interpretations wanted for distinction.

Leonard came across as a prime example of the modern school of vocal homogenization. Lows were smooth rather than chesty, the midrange was big and round, and highs were soaring. It was easy to imagine a voice of this breadth carrying well in the Met without sounding strained or forced. But as lovely as an even voice that retains its beauty throughout the range may be, it goes only so far in repertoire that calls for the something-extra that an inspired recitalist willing to take risks can provide.

Nor was Leonard’s case helped by Iftinca’s piano, whose lid was open, at the most, an inch and a half. Accompaniment that should have spurred her to passionate heights and dramatic depths instead sounded flat, muffled, and devoid of color. Iftinca’s playing was so toned down and lacking in sparkle that, during intermission, one accompanist in the audience speculated that he must have been intentionally holding back, in deference to Leonard’s wishes. Musically, it made absolutely no sense.

Leonard’s forte in the Spanish language half of the program lay not with the big, emotionally charged songs but with the lullabies. The beautiful, hushed beginning of Manuel de Falla’s Oracion de las madres que tienan a sus hijos en brazos (Prayer of the mothers who hold their sons in their arms) took us deep into the sadness of a woman praying to Jesus that her beloved son not be taken away to fight and die as a soldier. Leonard followed this lovely rendition with the gorgeous sadness and stillness of Mompou’s Sólo las forres sobre ti (Only the flowers over you). Here, and in the beautiful “Canción de cuna para dormir a un negrito” (Cradle song for putting a black boyt to sleep), the fourth of Montsalvatge’s Cinco canciones negras (Five Negro songs), she was totally in her element, radiating the nurturing warmth of motherhood.

She offered brilliant colors on top, in place of emotional abandon.

When fire was called for, or, in Montsalvatge’s “Chévere,” brutality and ugliness, Leonard came up short. Nor could she convey the teasing charm of Valdverde’s Clavelitos (Carnations), or the intimacy of the folk song Los pelegrinitos (The little pilgrims). Low-lying passages that called for chest voice and bite got neither. And in Falla’s highly dramatic Olas gigantes (Vast waves), which demands a full-out operatic treatment, she offered brilliant colors on top, in place of emotional abandon, and gave up any attempt at vitality on the low end. Listeners familiar with the artistry of Victoria de los Angeles and, from an earlier era, the ever-vivid and equally charming Conchita Supervia, found their supremacy in Spanish repertoire unchallenged.

Hopes that Leonard, a native New Yorker, would excel in American repertoire were dashed by far too many old-fashioned songs tailor-made for the Voice of Firestone radio program of the 1950s. Not even short pieces by William Schuman and Charles Ives, or the world premiere of Glen Roven’s Wild Nights, proved adventurous. Jennifer Higdon’s Hop & Toe Dance had rhythmic potential, but Leonard’s gorgeous highs and mild hints of sparkle were sabotaged by a piano that sounded as though it would rather hide under a blanket than let its pedals be tapped.

Most successful were the beautiful sweetness of John Alden Carpenter’s The Sleep That Flits on Baby’s Eyes, and the interesting harmonies in the premiere performance of Ben Moore’s I Want to Go With the One That I Love. But wishes for idiomatic renditions of Cole Porter’s Where, Oh Where and the final encore, Bernstein’s “Somewhere” from West Side Story, were instead met with singing devoid of personality. “Somewhere” sank beneath a treatment far too slow and careful.

The first encore, En medio a mis colores (Surrounded by my colors) — Leonard’s single venture into the Rossini repertoire that is one of her specialties — also failed to take off. The low notes were far too light, the performance was dismayingly deadpan, and the piano seemed virtually useless. On YouTube, watch Cecilia Bartoli and Jean-Yves Thibaudet’s performance of both this gem and Montsalvatge’s Canto negro to revel in all the colors and verve that Leonard lacked.