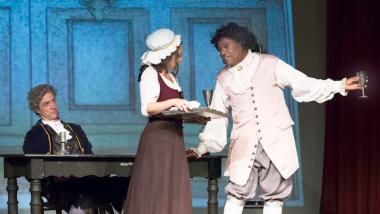 Pairing two short operas by one composer would seem to offer an evening of stylistic consistency. The two Nikolai Rimsky-Korsakov one-acts that Island City Opera chose for its current production — Mozart and Salieri and Kashchey, the Immortal — are radically different. Though written only four years apart, the first is introspective and restrained, and the second flamboyant and fantastical.

The pairing of such near-opposites gave insight into the rapidly evolving musical environment of late 19th-century Russia, but made for a strangely bifurcated evening. These productions are well worth seeing, but audience members need to use the intermission to prepare to shift gears (and ears).

Mozart and Salieri (1897) tells the apocryphal story of Mozart’s poisoning by his envious colleague, a story famously dramatized in the movie Amadeus. Rimsky-Korsakov’s libretto was a poem by Alexander Pushkin that austerely dramatized the grim story through monologues by Salieri and his two conversations with Mozart. Rimsky-Korsakov set the poem to a restrained and largely Classical music that both reflects Mozart’s music and transforms it into Romantic and modernist idioms. As in Amadeus, Mozart’s Requiem plays an important part, dramatically and musically: Its opening bars are performed in the opera. Rimsky-Korsakov also brings in the history of musical innovation that followed Mozart’s death, as his Mozart plays a composition (one that the real Mozart never wrote) beginning as recognizably rococo and soon morphing into the very non-Classical harmonies of Beethoven and Liszt.

Darron Flagg, gifted with an excellent light tenor and impeccable comic timing, made a wonderful Mozart. His ingenuous glee in tasting Salieri’s excellent wine gave a telling glimpse into Mozart’s endearing humanity just before we hear the sublimity of the Requiem.

In Salieri’s monologues, set as flowing, free-form recitatives, Rimsky-Korsakov captured the subtlety of Pushkin’s passion and restraint, as the poem asked dark questions about human life — what is evil? and is it compatible with genius? — and acknowledged that we are not likely to find the answers. In this production, Salieri was powerfully channeled by baritone Anders Froehlich — tall, grave, and decorous, conveying the opposite of Mozart’s mercurial boyishness and allowing us to experience the anguish of Salieri’s conflicted admiration and envy for Mozart. Island City Opera appropriately chose to sing this very text-based opera in English translation.

Kashchey, the Immortal (apparently receiving its U.S. premiere here, and admirably sung in Russian), abandons restraint for exuberance. Written in 1901–02 after Rimsky-Korsakov’s discovery of Wagner, this folk-tale opera is pure fantasy. The evil wizard (and czar) Kashchey has imprisoned a princess (the czarevna) in his gloomy castle. Far away in an enchanted garden, her beloved Prince Ivan falls victim to the seductions of Kashchey’s daughter, Kashcheyevna, a fierce seductress whose role in life is to kill her lovers and never weep for them — Kashchey’s immortality depends on this. But this “belle dame sans merci” falls in love with her intended victim, begins to weep, and sets in motion a tumultuous ending in which Kashchey dies while his daughter is turned into a (weeping) willow.

Taking his lead from Wagner, Rimsky-Korsakov invented musical themes (leitmotifs) for each of the characters, orchestrated with the rich coloration that we might expect of the composer of Scheherazade. Overall, the opera sounds rather eclectic, mixing the high-Romantic scene-painting of the Ring cycle with the lyricism of Tosca and with more than a hint of the colorful barbarism of Firebird.

Tenor Alex Boyer was splendid as Kashchey, grotesquely costumed with long metal fingers and black vulture-like plumage (overall, most of the costumes were spectacular). Boyer’s powerful and rhythmic delivery brought the scene to life whenever he was onstage. Also excellent was mezzo-soprano Silvie Jensen as Kashcheyevna, particularly in the blood-curdling aria in which she gleefully sharpens her sword. Soprano Rebecca Nathanson delivered the czarevna in a rich and flowing Russian sound, but appeared stiff in her acting and sang well behind the beat in one of her long arias. Baritone Igor Vieira, Prince Ivan, not in his best voice on the opening night that I attended, showed little chemistry with his two lovers. Bojan Knezevic was energetically eccentric as the “Storm Knight.”

Both productions featured excellent conducting by guest conductor Lidiya Yankovskaya and lively stage directing by Richard Bogart. The chamber orchestra, seated cheek-by-jowl with the audience, played with utter confidence even in the demanding chromaticism of Rimsky-Korsakov’s storm scenes; special kudos to solos by James Pytko (clarinet and bass clarinet) and Gabriel Beistline (cello). An excellent chorus sang in both of the operas. A quartet of dancers, partly hampered by the small stage, used rather too small a repertoire of gestures.

The informal setting of the ballroom in Alameda’s Elks Lodge (including an option of proms-style tables with wine and snacks) made for a congenial atmosphere. Lacking a full theatrical infrastructure, however, made for some haphazard lighting choices: particularly unfortunate was the way a projected image of Vienna put random blotches on the faces of the singers.

There are two more presentations of Mozart and Salieri and Kashchey, the Immortal on Friday, Jan. 26 at 7:30 p.m. and Sunday, Jan. 28 at 2 p.m. Details at the Island City Opera website.